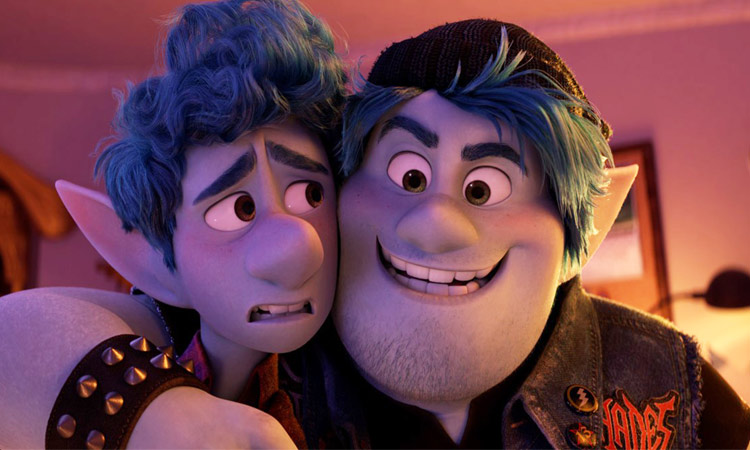 Ian (Tom Holland) and Barley (Chris Pratt) in a scene from “Onward.” TNS

When Disney and Pixar decide to work together on a movie, you bet it’s going to be a good one.

It’s going to make you laugh and cry and cheer when the characters ultimately achieve their goals. “Onward,” the newest animated adventure from Disney/Pixar, is no different.

The movie starts with a flashback to how things used to be: mystical beings like dragons, pixies, ogres, centaurs, unicorns, elves, wizards, mermaids, all living together in a magical world. But the wizards found magic too hard to master so they replaced it with the convenience of electricity and appliances, as well as modern means of transport, until one day everyone forgot about it altogether, and life as we know it was born.

The story then shifts to the present world which has lost all contact with its exotic historical past; it is a place called New Mushroomton, whose residents include centaurs, merpeople, pixies and garbage-scavenging unicorns. We meet two teenage brothers, Barley (Chris Pratt), who is obsessed with quests, and Ian (Tom Holland), who is more practical and timid. Ian has all the issues of any awkward teenager: an overbearing brother, crippling social anxiety, his mum’s boyfriend is a cop who loves to crack the lamest dad jokes ("Working hard or hardly working?"). Worst of all, he badly longs to meet his father, who died before he was born.

When Ian turns 16, his mother Laurel (Julia Louis-Dreyfus) hands the brothers a gift left by their father. It is a magical spell-casting wizard staff and a spell that would bring him back from the dead for a single day.

But of course things go wrong and they are only able to bring Dad back from the waist down before the phoenix gem (probably inspired by the Marvel Cinematic Universe) bursts into a million little pieces. What follows next is a good old-fashioned quest to locate a new phoenix gem before the day is over. They set off on Guinevere, which is a run-down van with a large Pegasus painted on its side, that Barley has constructed himself.

Holland has proven his forte time and again, whether it has been his comical timing playing Spider-man, or the nerdy inventor from “Spies in Disguise” opposite Will Smith. In “Onward,” he plays someone who is afraid of everything, whether it is learning how to drive, or even inviting people to his party.

Pratt, on the other hand, is a true comic mastermind. I’ve been a big fan of his since his “Parks and Recreation” days where he starred as the goofy and lovable Andy Dwyer. Barley is basically the animated version of Andy: Unafraid of everything and unapologetically embracing his silliness, while inspiring Ian to reach his potential.

“Onward” is a warm tale of brotherly love formed during an epic coming-of-age quest. And, like any other good adventure, it is less about the destination and more about the journey itself. “Onward” tugs at all the right heartstrings to produce a lot of laughter and tears. And, if you are anything like me, it would be best to keep a lot of tissues handy to stop the ugly crying that will ensue while you’re watching this movie.