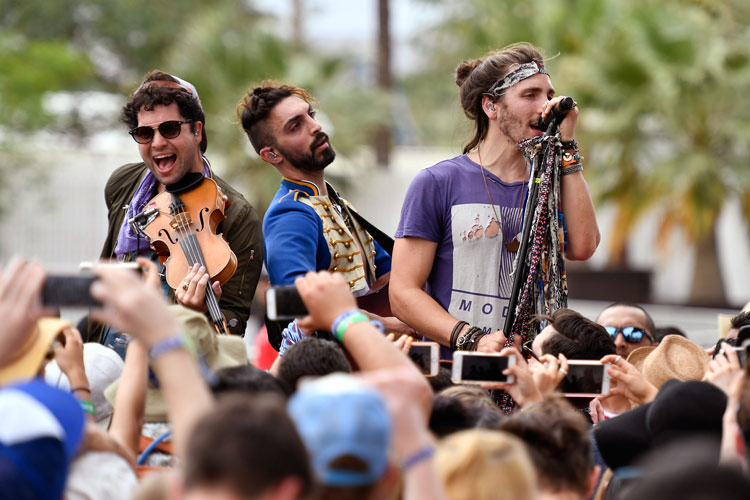 It's probably safe to say nobody in the history of folk-pop has ever learned to play violin, dobro, banjo, cello, viola and guitar in the same way Zambricki Li did when he was 13.

Growing up in New Jersey, he was hit by a car, then went into a coma. After he woke up, he was so dazed that people came to his house and spoke with him and he doesn't recall the conversations. He does, however, remember picking up a violin, and "after like a minute of having my finger on the strings, I figured out vibrato" — an advanced technique that takes months or even years to learn.

Li turned out to have a medical condition known as acquired savant syndrome, in which a head injury or stroke has the side effect of unlocking a hidden talent. Soon he was mastering the music from the Nintendo game Mike Tyson's Punch-Out!! on violin, unknowingly setting the foundation for his career.

Today he plays guitar, violin and other stringed instruments in the sprightly Los Angeles band Magic Giant. "I wasn't from a musical family. There was addiction in my house and other stuff going on, so when I found (music) for myself, it was like, 'This is mine,'" says Li, 37. "This came from nowhere, so it was like finding a superpower or something. There was a (recent) show about acquired savant syndrome, but that was not a thing when it happened to me. I just started playing and never looked back."

In a half-hour phone interview from Ashland, Oregon, between tour stops in San Francisco and Portland, Oregon, Li recalls this story with an enthusiasm befitting Magic Giant's unofficial tagline: "The most festive band on the festival circuit." 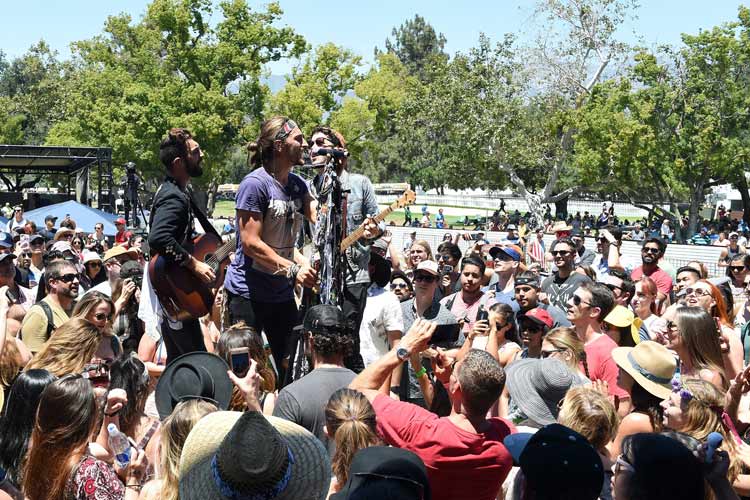 Magic Giant’s latest album sounds like the Lumineers and Mumford and Sons running amok in a candy store. TNS.

The quote, he says, reflects the band's music and attitude; its latest album, 2017's Into the Wind, sounds like the Lumineers and Mumford and Sons running amok in a candy store, and the recent video for its 2019 song Disaster Party shows the band gleefully chasing a purse-snatcher through LA's streets and convenience stores.

"It means we are genuinely having a good time at these festivals," Li says. "We're playing 37 cities across the country, we're out here with our friends American Authors, we're putting on a big show and we put together a huge band for this and we are having a blast."

Li's talent with stringed instruments led him to songwriting, and he wound up moving to Nashville, Tennessee, where he worked with veteran session musicians, including the late "Cowboy" Jack Clement and fiddle player Buddy Spicher, and checked out box sets from the public library to learn the history of country and bluegrass.

He appeared in Paper Heart, and wrote a song for the film, then moved to LA where he met singer/songwriter Austin Bisnow. (Later, after watching guitarist Zang in an online salsa-dancing video, they added him.) The duo played a couple shows together, then retreated to various studios for work Li calls "behind the scenes."

I wasn't from a musical family. There was addiction in my house and other stuff going on, so when I found (music) for myself, it was like, 'This is mine.'

"If you're doing movie stuff and composing, it's a different life. You're in a recording studio for 11 hours a day, which is really different from the crazy ride we're on now, which is a mind-blowing adventure," Li says. "We both wanted to play music festivals, hit the road and connect with people — create something that wasn't just inside the walls of the studio."

Bisnow and Li reconvened to play a Washington, DC festival in 2014, then returned to LA as Magic Giant. Their first gig drew 100 people. "People don't always get that in LA, it can be a lonely place — just highways and traffic, stress," he says. "People do come together. It's like a grouping of small villages. (If) you can get all the villages to come out, it's a great time."

They recorded Disaster Party at the band's studio, in an underground 1940s bunker on a piece of property Li owns in the city (but no longer lives on). It's not immediately obvious from the song's whistling, breezy tone that it's about last year's California fires and how, as Li says, "all the neighbours put together their own little impromptu fire department and banded together." Bisnow himself had to be evacuated, but "LA takes the whole thing in stride."

Li describes Disaster Party as "keeping it simple, just a guitar and a whistle," and suggests Magic Giant's new batch of songs will be equally minimalist — but he can't say when they'll come out.