VIDEO: Where Sara Ali Khan is concerned, Kartik Aaryan is such a tease - GulfToday

VIDEO: Where Sara Ali Khan is concerned, Kartik Aaryan is such a tease 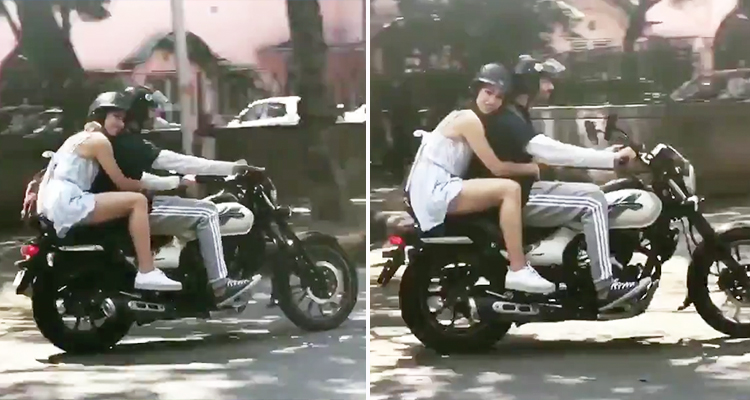 Screenshots of the video shared on social media.

It is a rite of passage. Ahead of a Bollywood movie release, the lead stars go on a heavy-duty promotion spree for the film.

Kartik Aaryan and Sara Ali Khan, who headline roles in their newest ‘Love Aaj Kal,’ are no exception.

They indulge in all kinds of antics – on a lark – to see that they and the movie remain in the spotlight.

With Valentine’s Day less than 72 hours away, the rumoured lovebirds were spotted cruising around Mumbai on a motorcycle, wearing helmets.

The actor, on Tuesday night, shared a video on Instagram of himself and Sara, in which both of them can be seen on the mobike. However, it's the caption that grabbed many eyeballs on the Internet.

On his Instagram post of the video, in which Sara can be seen dressed in a top and a skimpy skirt with a considerable bit of leg show, Kartik wrote: "Challan katega" (“Will be booked for the act”) and hilariously teased Sara by adding: "Aur mera bhi...." (“Even I will be booked”).

The actress’ reaction was quick as lightning: she dropped an angry emoticon in the comments section.

But Kartik knows how to hose down such situations. He is the extinguisher of emotional fires: he quickly pacified Sara with a quip: “Joke hain amma joke… Soja” (“It was just a joke, lady, just sleep over it.”)

But this isn’t the first of his postings with the playful siren. On Monday he shared a photograph on Instagram of him feeding Sara with some delicious Indian food. He captioned the image: "Kaafi dubli ho gayi ho... Aao pehle jaisi sehat banayein... (You have become so thin. Let's make you like your old self.”).

"Those out of the loop of Bollywood goss may be informed that Sara was quite fat before, weighing over a whopping 90kg before drastically trimming all the love handles to emerge as a sinuous, bodacious beaut of a star.

Yet another clip, which Sara Ali Khan shared recently, features Kartik, wearing a helmet, riding a bike with Sara on the pillion holding onto him, but without a helmet.

Commenting on her post, Kartik writes: "Helmet kahan hai, madam?" (“Where is your helmet, madam?”) and Sara quickly replies: "You stole mine."

In what may be a dampener for fans of the stars, a love scene in the new movie has been clipped by the Censor Board in India, which also muted some cuss words and blurred her cleavage.

The film is slated to release on Valentine’s Day, February 14.