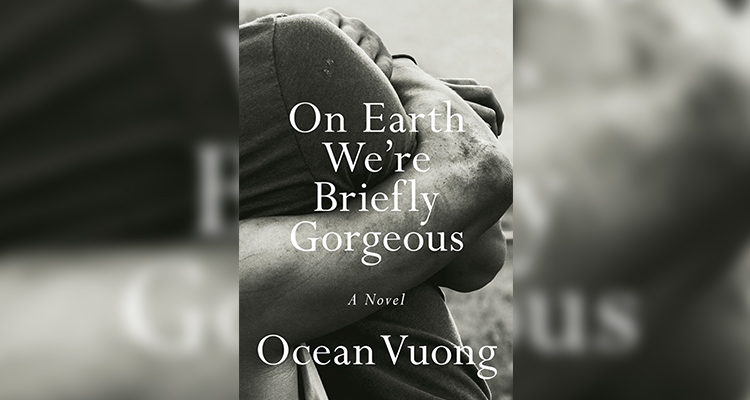 Ocean Vuong said he wrote the first draft of his bestselling novel by hand — and in a closet. It was the only quiet space in his home.

“It was perfect. … I cleared out the closet. I put a lamp in there. I put on my headphones, and it was kind of like a cockpit,” Vuong told more than 600 people gathered at the L.A. Times Book Club. “It’s really good. I highly recommend it.”

Vuong drew laughs as he talked about the logistics of writing his debut novel, “On Earth We’re Briefly Gorgeous,” in a conversation with Times reporter Carolina A. Miranda at Hollywood’s Montalbán Theatre.

His 2019 book is written in the form of a letter from the narrator, a young man in his 20s known only as Little Dog, to his illiterate Vietnamese mother who hardly speaks English. The book delves into a family history with origins in Vietnam and expands to Hartford, Conn., exploring a complicated, loving relationship between a mother and her son, as well as themes of race, war, class, sexuality and masculinity.

Vuong dedicated the book to his mother, Rose, who died of cancer at 51 last year, a few months after the book was published.

In a wide-ranging discussion, Vuong also talked about the profound impact on his work of Toni Morrison’s “Beloved,” a novel about a black woman who escapes slavery after the Civil War.

“I never saw a [piece of] literature that took the experience of survival so respectfully,” he said, pausing. “When Toni Morrison says, ‘I’m writing for young black girls,’ even though she says, ‘White people will read it, I hope they do.’ But she did not let the realities of the market hinder or affect her intentionality as an artist. And it just blew my mind that you can still do your work and you can say ‘no’ to the things that hinder you and say ‘yes’ to yourself.”

The audience erupted into applause.

“She inspired me,” Vuong said of Morrison, resting an elbow on his crossed legs. “I just thought: What happens if I intend for this to be from one Asian American to another, knowing that at the end of the day, the novel is something on a stage?”

Vuong emerged into the literary limelight in 2016 with his first book of poetry, “Night Sky With Exit Wounds,” which won the Whiting Award for poetry and the T.S. Eliot Prize.

It’s been a whirlwind year for the 31-year-old poet and author, who teaches English at the University of Massachusetts Amherst. “On Earth We’re Briefly Gorgeous,” which blends fiction and memoir, was published in June and became an immediate sensation. In September, Vuong received a MacArthur Foundation “genius” grant, freeing him from financial worries, at least for the next five years.

“For me, as a poet, I was always beginning with truth,” Vuong said about why he wrote a fictional autobiography. “So I think my impulse was the impulse of the poets before me, from Dante to Homer to Dickinson. They wrote myths out of reality. As a novelist, that seemed natural to me, to begin to see the truth as only the foundation.”

During the book club event, Times reporter Anh Do joined Vuong onstage to read a passage from his book and shared questions from others in the Vietnamese community who had read his novel.

In response, Vuong spoke about his goal as a writer to be inclusive.

“One of the greatest hopes as an artist is to create a town square where people get together and talk about this book and they talk about the questions and they bring their own life to it,” he said.

Times data journalist Aida Ylanan also presented a map she created that was inspired by the multiple places and characters mentioned in Vuong’s book. “I wanted to try and map all of these locations along with their connections and convey how much geographic ground is covered in the novel that you might just pass through if you’re reading it linearly,” she said.

Vuong reflected throughout the evening on his own journey and the power of the written word.

“When you read a book … you’re choosing to privilege a center, a space somebody else made for you,” he said. “That’s a beautiful thing, and it’s always in your hands. You can always turn away from the news that is meant to depress you and make you feel miserable and choose a book that you decide for yourself.

“Reading is to me the last saving grace that I know.”