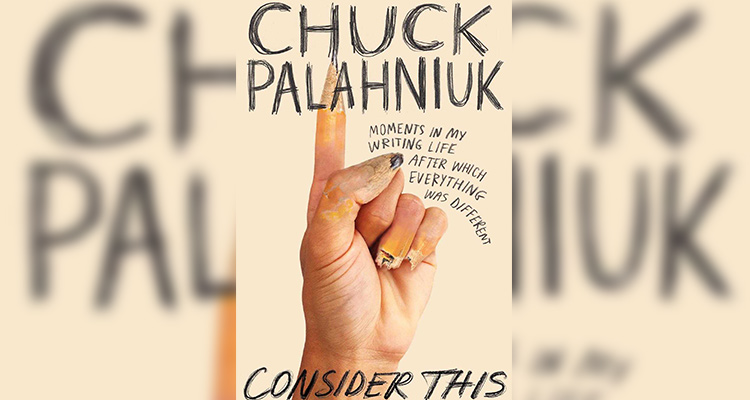 Consider This: Moments in My Writing Life After Which Everything Was Different" by Chuck Palahniuk. TNS

Chuck Palahniuk, the eccentric bestselling novelist who brought us “Fight Club” and other dark stories that developed cultlike followings, has set out to dissect effective writing in his latest book, a memoir that recounts his adventures and misadventures in the publishing world.

Palahniuk has made a name, in part, by writing on topics few people would dare to tackle (if you’ve read him, you know). So we might assume that a twisted, unbridled creativity is behind his success. Surprise — though that is likely true, Palahniuk also works from a disciplined methodology.

In “Consider This,” he pays generous homage to authors, coaches and editors who kept him on his unorthodox path when conventional publishing houses wouldn’t touch him.

Palahniuk praises dozens of storytellers in discussing their styles of writing, from Stephen King to Dorothy Parker to Ira Levin, and from Nora Ephron to Mark Twain and Charles Dickens. Along with mechanics (writing crisp dialogue, adding texture to narrative, varying the voice), he offers “a couple of surefire strategies for selling books to Americans,” taking on tired formulas and trite plot lines — something the sometimes shocking Palahniuk can’t be accused of.

He also shares his disdain for overpriced writing workshops that tend to be no more than therapy sessions full of disingenuous back-patting. The memoir comes in chapters he calls “Postcards From the Tour” — glimpses of run-ins with crazed fans and critics at book signings, or anecdotes about time spent with notable people in his career. Each Postcard reinforces the message just discussed.

And something you won’t get anywhere else: the author’s personal must-read lists of both fiction and nonfiction titles, writings and teachings that have molded authors through the decades.

Whether you’re inspired to improve your own writing or simply like to revel in the art behind your favourite authors’ work, this tamed-down, reined-in Palahniuk is insightful.