‘The Poppy Wife,’ by Caroline Scott 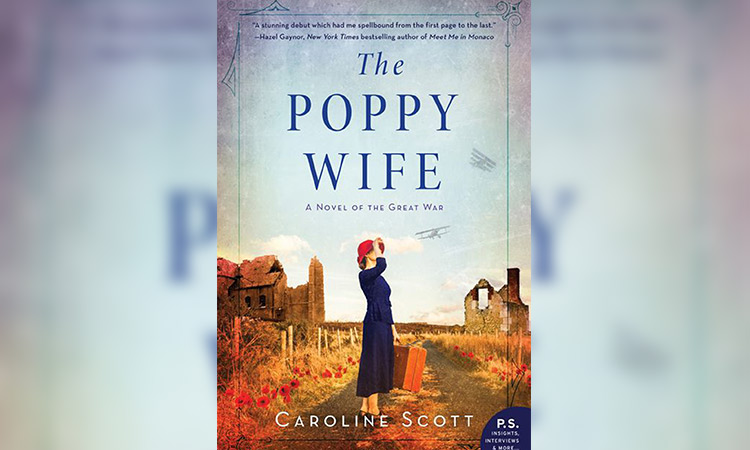 Edie had settled into her grief when the envelope came through the mail slot. No return address, just a smudged postmark from somewhere in France, and, inside, a photo of her husband with a distraught look on his face. Wasn’t Francis killed on the Western Front in 1917? Is he alive and sending her a message — but if so, what is it?

Caroline Scott’s absorbing debut novel, “The Poppy Wife,” takes readers into the aftermath of World War I as people rebuild their lives. But it could be any war, any time, with the universal themes she explores. In 1921, the war was over but the damage remained — to be repaired if it was physical, to be endured if it was not. The story focuses on two Brits: Edie, and her brother-in-law Harry, the only one of three brothers to return from the Somme battlefields.

Edie enlists Harry to help her find out what really happened to Francis. The search takes them back to France, where Harry earns a living as a photographer documenting the graves of British soldiers for their families. It is haunting work, plunging Harry into nightmarish memories of trench warfare. Now Edie’s assignment threatens to rekindle the feelings the two have suppressed for years.

Scott’s vivid writing puts us in the minds of the protagonists as they search, remember and regret. A typical tale would have readers hoping for a joyful reunion, but the more we learn, the more conflicted we become. As clues to her husband’s whereabouts emerge, Edie reconsiders what she’s asked of his brother. “When she had asked him to find Francis she believed that it would silence the doubts and the questions, but how loud they are now.”

“The Poppy Wife” arrives a year after the centennial observances of the war’s official end on Nov. 11, 1918, and the timing seems perfect. It reminds us that just because something has ended doesn’t mean it’s over.