Kindness wins over cynicism in ‘A Beautiful Day in the Neighborhood’ 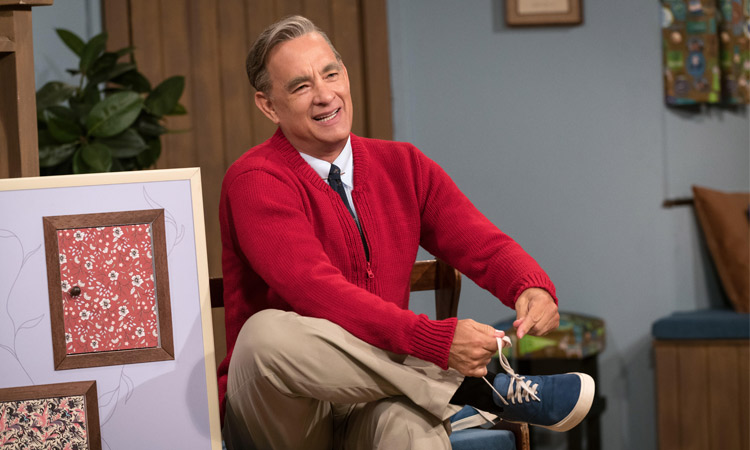 Tom Hanks stars as Mister Rogers in "A Beautiful Day in the Neighborhood." TNS

Heartfelt, captivating, feel-good movie of the year are some of the adjectives to describe the completely enthralling film, “A Beautiful Day in the Neighborhood."

As clichéd as it sounds, this is definitely a film needed in today’s world. A movie based on kindness and empathy, it benefits from the inestimable skills of Tom Hanks as Fred Rogers — yes, the Mister Rogers of PBS fame. Hanks does the best work he’s done in front of the camera in ages.

These days it takes a lot to coax Hanks, one of film’s finest actors ever, to lend his talent to a role. “Toy Story” films do not count. Recent on-screen portrayals have included the likes of “Washington Post” editor Ben Bradlee and hero pilot Chesley “Sully” Sullenberger.

That being the case, donning Mister Rogers’ red cardigan makes complete sense for Hanks, a man also known for his character and wholesome charm.

Lest anyone think this is a biopic, however, it’s far from it as “A Beautiful Day in the Neighborhood” plays like an episode of “Mister Rogers’ Neighborhood” that skews more toward adults with its study of death, love, loss and forgiveness.

Based on a true story of the friendship that developed between Rogers and writer Tom Junod, “Neighborhood” tells the story of journalist Lloyd Vogel (Matthew Rhys), a successful writer for “Esquire” magazine who still has coping issues from his youth — specifically his absentee father Jerry (Chris Cooper) — who abandoned his family when his wife became terminally ill.

Through the years, the anger continued to eat at Lloyd until it became toxic enough that he ends up in fisticuffs with dear ol’ dad when he shows up at his sister’s wedding.

"A Beautiful Day in the Neighborhood" stars Tom Hanks in the titular role. TNS

In "A Beautiful Day in the Neighborhood," Matthew Rhys stars as journalist Lloyd Vogel, a successful, but troubled, writer for "Esquire" magazine. TNS

Susan Kelechi Watson plays the role of Lloyd's wife, Andrea, in "A Beautiful Day in the Neighborhood." TNS

Tom Hanks (right) and Matthew Rhys in a still from director Marielle Heller's "A Beautiful Day in the Neighborhood." TNS

Chris Cooper plays the role of Jerry Vogel in "A Beautiful Day in the Neighborhood." TNS

Jerry wants to talk to his son to make amends. Lloyd wants little to do with the situation.

But those around Lloyd, including his wife, Andrea (Susan Kelechi Watson), notice what the renewed acquaintance has done to him. More importantly, so does his editor, who gives Lloyd, an investigative reporter, a unique assignment for him — writing a short profile of Fred Rogers.

Lloyd views it as a throwaway assignment and initially approaches it that way, until in Rogers he discovers that the all-too-nice facade is no false front, a fact that forces him to look inward at what’s been bothering him and how it affects him, his wife and how it could influence his newborn son in the future.

Yes, it’s corny. But guess what? It’s utterly charming because it’s easily relatable for anyone who’s found it difficult to unpack baggage from the past and Rhys is so utterly open and vulnerable in his portrayal. Some of his scenes with Cooper prove to be emotionally raw.

Make no mistake, however. Hanks as Rogers represents the draw here as the red cardigan fits perfectly. Hanks, however, doesn’t resort to caricature. In Rogers, he presents a well-defined person with flaws, despite the perception that he’s “too true to be believed.”

Give Marielle Heller (the underrated “Can You Ever Forgive Me?”), who directs from a screenplay from Micah Fitzerman-Blue and Noah Harpster, credit for making some smart choices — the first being casting Hanks. The second: imbuing the film with the visual feel of the TV show in some instances and its overall tone.

Add all of those factors together and it’s certainly “A Beautiful Day in the Neighborhood.”