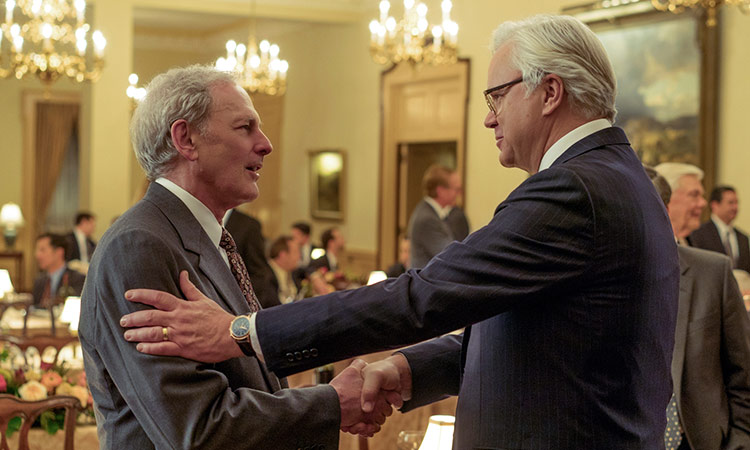 Victor Garber, left, and Tim Robbins in a scene from "Dark Waters." AP

Todd Haynes’ "Dark Waters,” about the prolonged (and ongoing) legal fight to uncover the environmental damage of cancer-inducing "forever chemicals” and hold their corporate makers accountable, is a sober and ominous docudrama. On its surface, it’s an unspectacular one. Its lead character, a corporate defense attorney played by Mark Ruffalo, is no Erin Brockovich. The movie, itself, is gray and murky like the toxic West Virginia waters that provide the film’s first gloomy sense of trouble.

But just the same, "Dark Waters” will in its modest, steadfast way make your blood boil. And that will do. 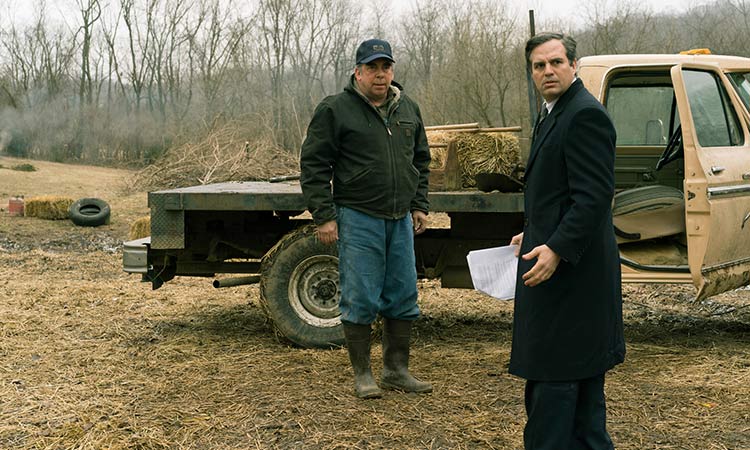 Bill Camp, left, and Mark Ruffalo in a scene from "Dark Waters."  AP

Rob Bilott (Ruffalo) is a West Virginia native and Cincinnati attorney for a large law firm, Taft Stettinius & Hollister, with a specialty in defending chemical companies. Just after he’s made a partner, a West Virginia farmer named Wilbur Tennant (Bill Camp) turns up in his office barking about his dead cattle and the DuPont plant next door. He dumps a box of VHS tapes at Bilott’s feet.

It’s only the mention of Bilott’s grandmother that gives him pause. Bilott’s colleague Tom Terp (Tim Robbins) overhears the encounter but assures Bilott discretion. "You can be from West Virginia, Rob. I won’t tell anyone.” 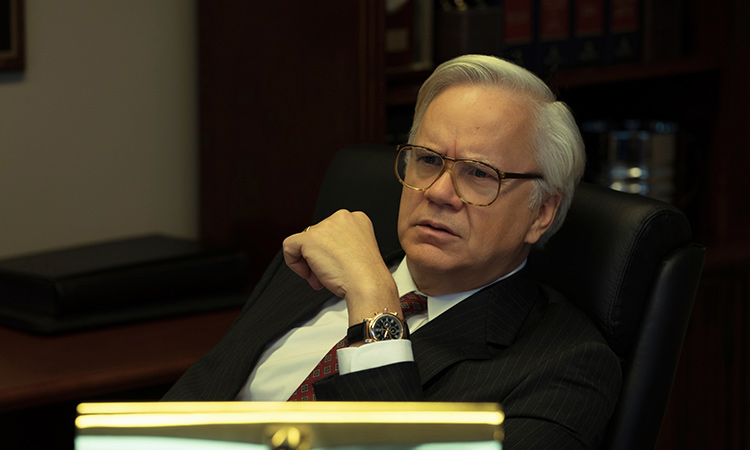 Tim Robbins in a scene from "Dark Waters." AP

Bilott is accustomed to representing the corporate side of such disputes, but he’s moved by Tennant’s case. He has warm memories of visiting the farms in the area as a child and milking cows. And Tennant, gruff and furious, is hard to ignore. Nearly all his 200 cows have suffered enlarged organs and other deformities. A field of his is littered with graves like a battlefield. A nearby creeks runs from a DuPont landfill.

Bilott takes the case over the concerns of his colleagues. Terp tells him to "surgical”: get in, get out. The firm would prefer to have DuPont as a client, not a foe. Bilott is himself friendly with DuPont lawyers, too. At first, he’s just trying to do a favor for a family friend. 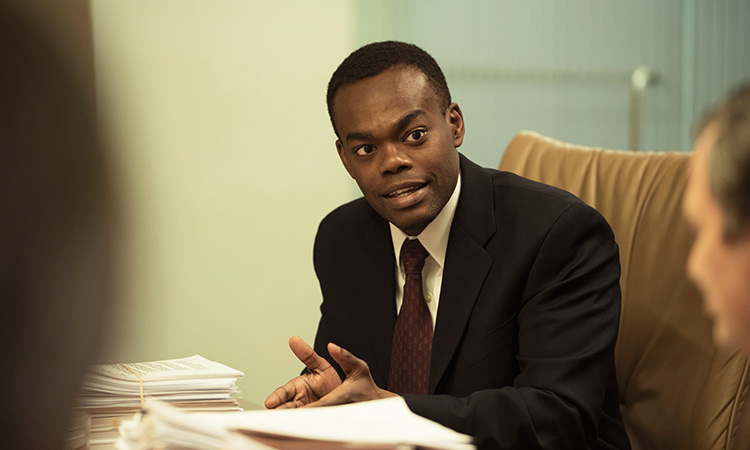 William Jackson Harper in a scene from "Dark Waters." AP

But the scope of the case grows exponentially. Bilott, whose story was chronicled in an engrossing and detailed 2016 New York Times story by Nathaniel Rich, goes from a 1999 lawsuit on behalf of Tennant to a 2001 class action involving several West Virginia communities. Through methodical research and investigation, he traces the pollution affecting Tennant’s fame to DuPont’s use of PFOA, or perfluorooctanoic acid.

"Dark Waters,” made relatively quickly by Hollywood standards, is the backstory on a legal drama that’s still unfolding, with ongoing debate in Congress and at the EPA on setting a national drinking-water limit. Critics, including the makers of "Dark Waters,” believe it’s taking much too long. 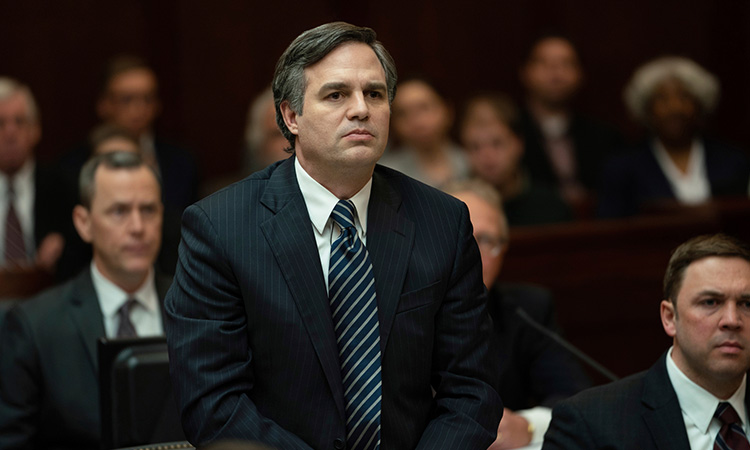 Mark Ruffalo in a scene from "Dark Waters." AP

It’s perhaps a familiar script: good cause, inspiration movie. "Dark Waters” distinguishes itself, however, in intricately following the story of a toxic substance, from a West Virginia backwater to ubiquity. It’s not the kind of film typical of Haynes, whose artful dramas ("Carol,” "Far From Heaven”) usually dig less into headlines than the fluidity of identity and the tragedies of societal convention.

But those qualities are also what make Haynes a natural fit for "Dark Waters.”

Where Haynes excels is in teasing out the personal and professional connections that mingle throughout. When Bilott grows aggressive in the investigation into DuPont, he’s breaking with decorum. He’s part of the old-boy network that works to protect companies like DuPont. In "Dark Waters,” arguments happen at fancy attorney banquets, and boardroom decisions alter innocent human lives.

It can seem like there are too many corporate exposes. While they could use some new angles and perhaps fewer lawyer protagonists, I suspect that’s not the problem. "Dark Waters” plays like a "Chernobyl” for America. Unfortunately, we probably need a lot more of these.

"Dark Waters,” a Focus Features release, is rated PG-13 by the Motion Picture Association of America for thematic content, some disturbing images and strong language. Running time: 126 minutes. Three stars out of four. 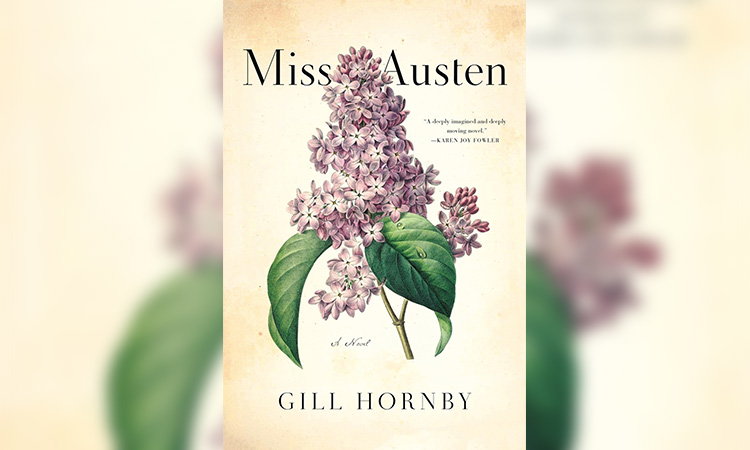