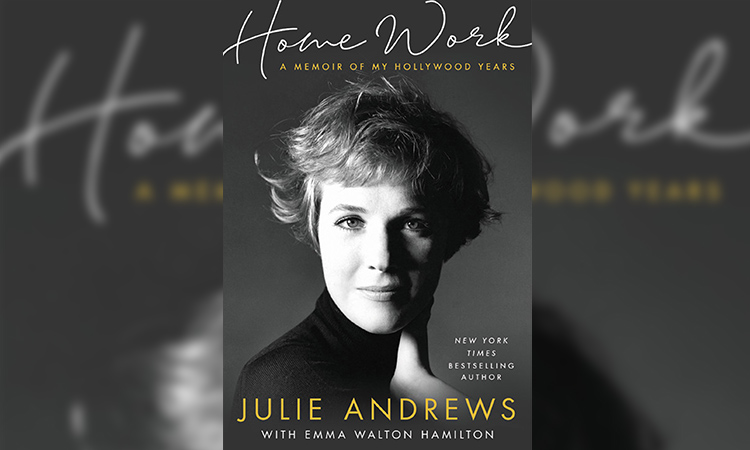 “The hardest thing with this book was finding a voice,” Julie Andrews says.

She is talking, in a phone interview along with her co-writer, her daughter and longtime collaborator Emma Walton Hamilton, about her new memoir, “Home Work.”

The statement sounds, at first, like a joke — the voice of Julie Andrews is, after all, one of the most famous in the world, and not just the impossibly crystalline expanse of her singing voice, which, alas, was irreparably damaged during surgery in 1997. Whether in performance, interview or on the pages of the many books she has written, Andrews’ melodic cadence, often wry though always kind, is instantly recognizable.

But memoirs, like memories, are tricky things, the past reconstructed in the present, and finding a tone that reflects the reality of the former and the perspective of the latter is not easy. Although Andrews had already written one memoir, “Home,” she wanted “Home Work” to feel different because the two portions of her life were different.

“In ‘Home’ I was an adult telling a child’s story,” Andrews says, speaking from Sag Harbor, N.Y., where she lives, “but in ‘Home Work’ I am telling the story of my adult life. I wanted to write about how things came at me, about paying my dues, about learning my craft, learning who I was, learning to parent, all the homework that I did.”

The tone she and Hamilton settled on is conversational and strikingly matter-of-fact. Just like the title.

After all, when choosing a title for the story of her transition from “star of stage” to “star of stage, screen, television and the hearts of millions,” Andrews could have gone big. Very big. Her career certainly did.

While nothing like an overnight success — suggest that she took Hollywood by storm and you will be reminded, gently but firmly, that Andrews began working the British vaudeville circuit at 10 and made her Broadway debut at 19 — the fact remains that she began her film career by winning an Oscar for her first movie (“Mary Poppins”), a feat she followed up a year later with the critically acclaimed antiwar drama “The Americanization of Emily” and a little picture called “The Sound of Music.”

“I was very lucky,” she says, a phrase that occurs often in “Home Work.” “I was blessed with a voice that gave me many wonderful opportunities.”

In the years the memoir covers, Andrews starred in countless films, television movies, specials and her own variety series, which won seven Emmys for its one and only season. The American Film Institute recently announced she will be receiving its 2020 Life Achievement Award (why it took so long is known only to them).

So when naming the book Andrews would have been forgiven a few superlatives. Instead, she called it “Home Work,” which plays nicely off “Home” while reminding readers that just because performers make it look easy doesn’t mean performing is easy. Especially when you are also dealing with, say, divorce, falling in love, raising children and entering psychotherapy. Or endless moving, ailing parents and a new marriage; troubled teens; a spouse’s struggles with addiction; and even, when she and that spouse, Blake Edwards, were adopting their second child together, the fall of Saigon.

In other words, life. Which requires a lot of work. Even when you are Julie Andrews.

Whether describing how the backdraft from the helicopter used to capture the famous opening shot in “The Sound of Music” knocked her flat into the mud on every take, or the difficulty of separating from and then divorcing her first husband, Tony Walton, her deep friendship with Carol Burnett or the grief she felt when she left her mother’s bedside hours before she died, Andrews manages to acknowledge the remarkable nature of her life while making it absolutely relatable, to offer perspective rather than a parade of nostalgic insight.

That wasn’t always easy either.

“It was like living my life all over again, except in more detail,” Andrews says. “At the time I was busy living my life, working, taking care of my kids, being a wife. It’s amazing the amount of things you shove away to get through the day-to-day.

“There was a lot of laughter writing this book,” she adds. “But there were definitely some tears.”

As with “Home,” she and Hamilton began by building a timeline, and then spent hours each day talking it through. “We had come up with a pretty good system,” Hamilton says. “And at a certain point in this book, Mom had begun keeping diaries.”

Although she had always kept copious datebooks, Andrews began writing daily journal entries around the time she began psychotherapy, an event she describes candidly as the most courageous thing she had ever done.