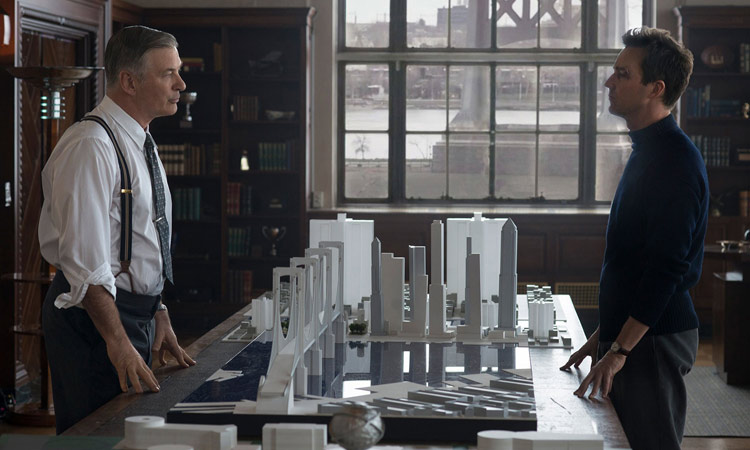 Edward Norton spent 20 years working to get his adaptation of Jonathan Lethem’s 1999 novel “Motherless Brooklyn” to the screen, adding a few substantial, challenging and chewy elements to the oddball detective tale.

And while he shepherded the project, the movie business evolved in such a way that a moderately budgeted mystery with a starry cast could be seen as a gamble for a Hollywood studio. In the age of blockbuster superhero entertainment vs. micro-budget indie films, Norton has delivered a movie of another era: a sturdy, wordy politically minded and wholly engaging whodunit.

About that era: Norton transposed the time period of the novel from 1999 to 1957. It’s a New York City of private eyes careening around the boroughs in heavy cars, Harlem jazz clubs and racial strife roiled by a housing crisis as a modern New York springs up under the hand of Moses Randolph (Alec Baldwin), an avatar for Robert Moses, the “master builder” of the city.

It’s an ambitious adaptation that expands the story, weaving a largely unknown history of Moses and his influence on the city into the story of Lionel Essrog (Norton), a Brooklyn gumshoe detective with Tourette’s syndrome.

It takes a beat to fall into step with the rhythm of “Motherless Brooklyn,” punctuated by Lionel’s twitches, obsessive habits and verbal outbursts. Although he apologizes for it often, Lionel’s Tourette’s is in many ways his superpower. His quirky behaviour renders him nonthreatening during investigations.

And he’s quick on his feet, mentally and physically, skills no doubt honed from a childhood spent in a Brooklyn Catholic orphanage with a disruptive neurological disorder. But Lionel also has a near-perfect echoic memory for words and voices, details and clues erupting in involuntary bursts of sing-songy rhymes that serve, in part, as mnemonic devices.

Lionel was scooped up out of the orphanage by Frank Minna (Bruce Willis), and now he’s one of “Minna’s Boys,” aiding the war vet in his private investigation business.

When Frank is whacked during a meeting with a mysterious group of men, Lionel becomes hell-bent on solving Frank’s murder, plunging into the unknown territory of New York politics, roiling with class and racial strife as black neighbourhoods are condemned and razed for development under Randolph’s all-powerful hand.

The snappy investigative procedural is a pleasure to watch unfold, especially with the offbeat detective at the centre. Norton’s performance could be cartoonish, but he executes it with aplomb, the twitches and tics motivated and authentic to the character and his experience of the world.

Seen through Lionel’s eyes, the perspective is deeply empathetic, but in some ways, myopic. He wants to do the right thing for the people that he cares about, like Frank, and his new friend Laura (Gugu Mbatha-Raw), a young aide to a city official tackling the housing crisis. But that’s about as far as Lionel’s humanitarian streak goes.

It seems a bit strange that Norton would insert the Moses story and engage with the city’s dark history of development without saying much more than a vague condemnation at the idea of “power” and the morally corrupt nature of people who seek it.

This is a solid and enjoyable mystery flick, but through all the twists, turns, tics and twitches, “Motherless Brooklyn” works hard to impart its message. However, what comes out is ultimately somewhat hollow.