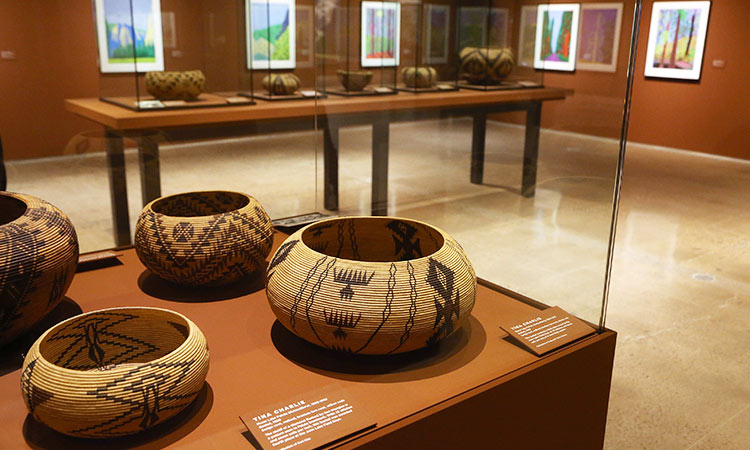 David Hockney has his Yosemite work, background, along with baskets from weavers of the Miwok and Mono Lake Paiute tribes. AP

It is not often that you see this: twinning the significance of tribal ethos with a reputed national park. Yet this is what British artist David Hockney has done: for an exhibition he has juxtaposed the baskets made by tribal  weavers and his paintings of the Yosemite national park.

Yosemite National Park is a magnificent attraction by itself, with its lovely waterfalls, giant sequoias, massive wilderness and much more. The park, which stretches for nearly 1,200 miles, is also a tribute to human foresight.

Decades before Yosemite became a national park and mesmerised visitors like British artist David Hockney, it was simply the backyard garden of Native American basket weavers.

"It was not a wilderness. It was a garden," said Dr Ann Marshall, director of research at the Heard Museum in Phoenix. "One of the things that we try to impress upon people is you just don't go out randomly picking in the park and get this kind of material. It has to be they know on a micro level Yosemite."

The reverence women from the Miwok and Mono Lake Paiute tribes and a man considered one of the world's greatest living artists had for California's Yosemite Valley has inspired an unlikely exhibition. "David Hockney's Yosemite and Masters of California Basketry" which opens on Monday at the Heard, known for showcasing American Indian arts and culture.

"It's showing his work in a different context and related to something else. When you look at these baskets, they're actually drawing with straw and grass. It's a great sort of pairing of draftsmanship I think.

Richard Benefield, former executive director of the David Hockney Foundation, said the 82-year-old artist, who currently lives in Normandy, France, is pleased with the pairing.

"It's showing his work in a different context and related to something else," Benefield said. "When you look at these baskets, they're actually drawing with straw and grass. It's a great sort of pairing of draftsmanship I think." 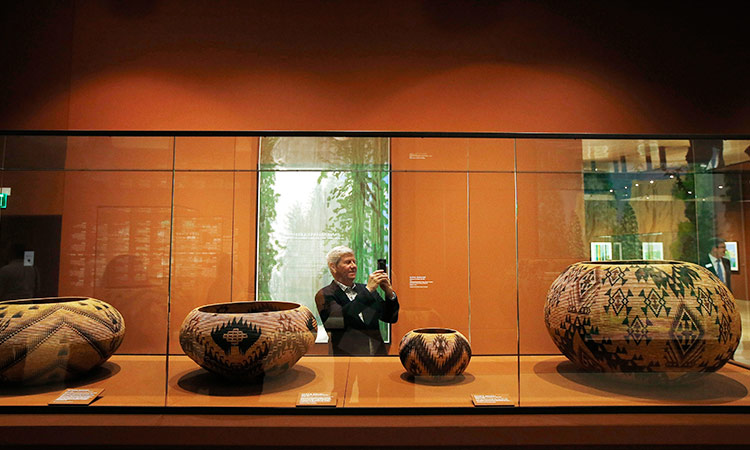 Richard Benefield takes a photo inside the exhibit. AP

Known for paintings depicting sun-kissed Los Angeles swimming pools and landscapes of his native Yorkshire, England, Hockney created works from "expeditions" to Yosemite in 1982, 2010 and 2011. He has worked in photography, printmaking, watercolors and other media. But he's never been one to shy away from new technology — as reflected in this exhibition. It's anchored by 29 drawings of Yosemite done on Hockney's iPad and then printed on paper.

He happened to be visiting California in 2010 when the iPad first came out, according to Benefield. Hockney decided to buy one and began dabbling with it.

"You get true colour immediately. You don't have to wait for the paint to dry," Benefield said. "For years he had his suit jackets made so that a sketchbook would fit inside...he discovered the iPad would fit right in the same pocket." 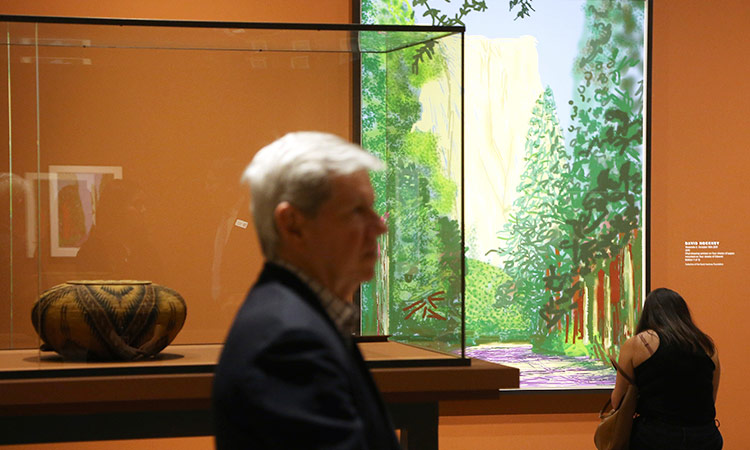 Hockney still uses an iPad. In September 2018, a stained-glass window he designed on the device to honor Queen Elizabeth II was unveiled at Westminster Abbey.

Other works in the Heard Museum show include photo collages from the 1980s, including one of Yosemite.

Benefield believes this is the first time Hockney's work has ever been shown in Arizona. But he continues to remain in the spotlight elsewhere. An exhibition of his work at Amsterdam's Van Gogh Museum closed in May. One of his most famous paintings, "Portrait of an Artist (Pool with Two Figures), fetched $90.3 million at auction in New York in November 2018. At the time, the sale broke the record for the highest bid for a work by a living artist sold at auction. 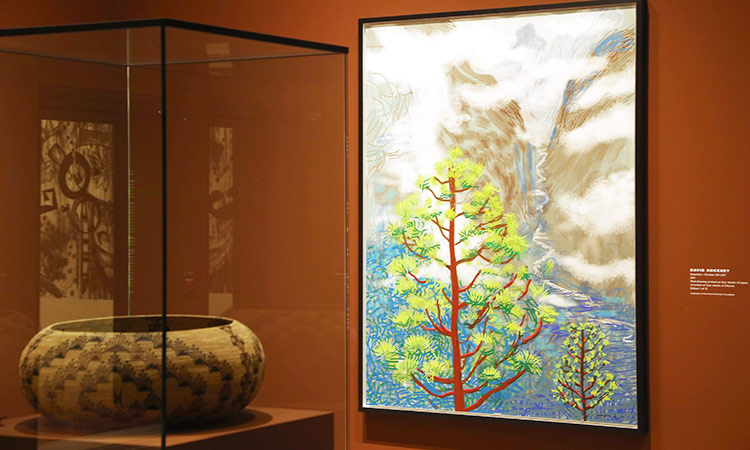 David Hockney's Yosemite artistic work along with a basket. AP

Now, he is working on 3-D photographic drawings, Benefield said.

Equally impressive are the 28 baskets sitting in display cases alongside the iPad drawings. Most of them were made during the first half of the 20th century. The intricate objects represent the work of seven renowned indigenous basket weavers like Carrie Bethel, Lucy Telles and Tina Charlie. Most of them did their craft while working as housekeepers or similar domestic jobs, according to Marshall.

Native basketry caught the eyes of outsiders during Yosemite Indian Field Days. Park officials beginning in 1916 tried to drum up tourist business during slower months with special events. Tribes could sell their wares to visitors. Marshall said the "field days" gave weavers an opportunity to attract collectors that appreciated what they were doing as art. 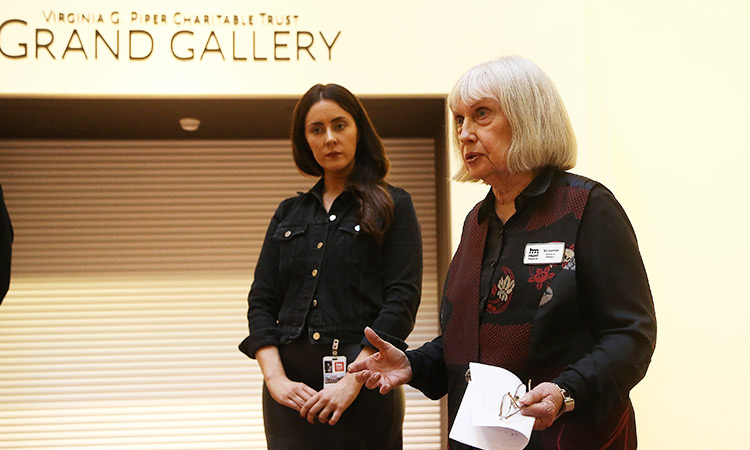 "You look at them and say, 'Where did that come from?' It didn't come from any commercial product they saw. It's just art," Marshall said. "It's consummate skill with a very difficult medium."

The art form is still very much a part of the fabric of Yosemite, which loaned many of the baskets. Julia Parker, who married Lucy Telles' grandson, learned to weave and went on to be a cultural interpreter. She was beloved as a weaving demonstrator at the park for more than 50 years until her retirement in July 2015. Her daughter, Lucy Parker, is expected to hold a demonstration at the Heard during the exhibition's run. 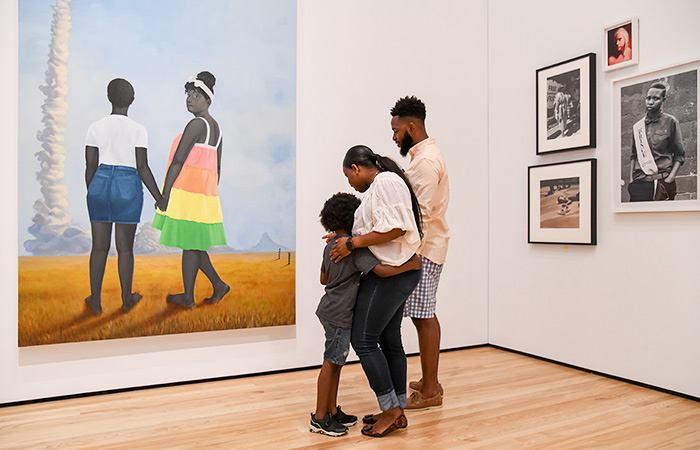