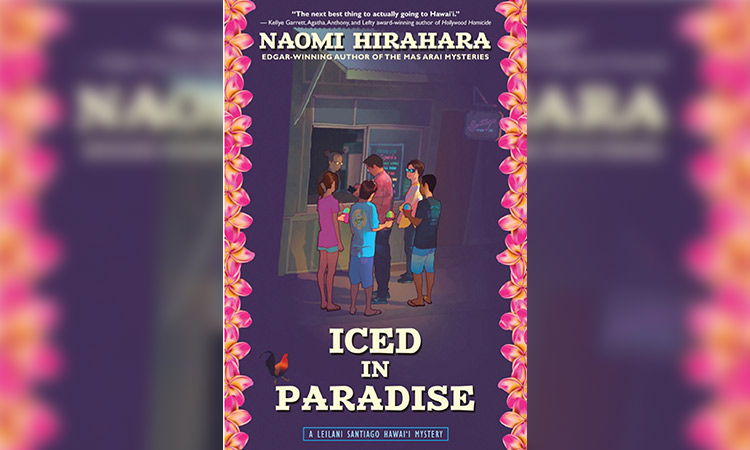 In “Iced in Paradise,” award winning Naomi Hirahara focuses on the multicultural Santiago family, who love each other, sometimes irritate each other, but always unconditionally support each other.

The launch of a new series, “Iced in Paradise” is the epitome of the traditional mystery, concentrating on character with a minimum of violence.

Leilani Santiago has returned to her home on the Hawaiian island of Kaua’i to help run the family’s shave ice shack since her mother has been diagnosed with multiple sclerosis.

It was not an easy decision since Leilani thrived on the urban vibe and rainy days of Seattle where she lived with her boyfriend. But the family has been selling the Hawaiian treat for about 50 years, her sisters are too young to run it and her grandmother needs a break. Note — it is shave ice, not shaved ice as it is often called. “If you say shaved ice, we know that you’re not from around here,” states a sign at the stand.

As much as Leilani and her sisters love their charming father, Tommy, they have learned not count on him. An avid surfer, Tommy is often absent — “like a magician, here one moment and gone when you’re not looking” — chasing one business plan after another.

Tommy’s latest venture is a line of shirts and promoting champion surfer Luke Hightower. Following a vocal argument over business with Tommy, Luke is found murdered. Tommy becomes the logical suspect, considering his laissez faire attitude and a long-time feud with the investigating officer Sgt. Dennis Toma. Although it wasn’t part of her plan, Leilani delves into the role of amateur sleuth as she uncovers nefarious business dealings and complicated Hawaiian land ownership.

Hirahara’s affinity for showing the vagaries of families elevates “Iced in Paradise.” The Santiagos’ Japanese, Filipino and Anglo background allows Hirahara to show how the various cultures are incorporated into the family’s life. “Iced in Paradise” is peppered with a combination of Hawaiian and Japanese words that are explained in a glossary.

A breathtaking view of Hawaii enhances the story.

Hirahara is best known for her elegant series about L.A. Japanese gardener Mas Arai, for which she won an Edgar Award. We’ll look forward to more adventures of the Santiagos. “Iced in Paradise” will have you searching for shave ice in your community.