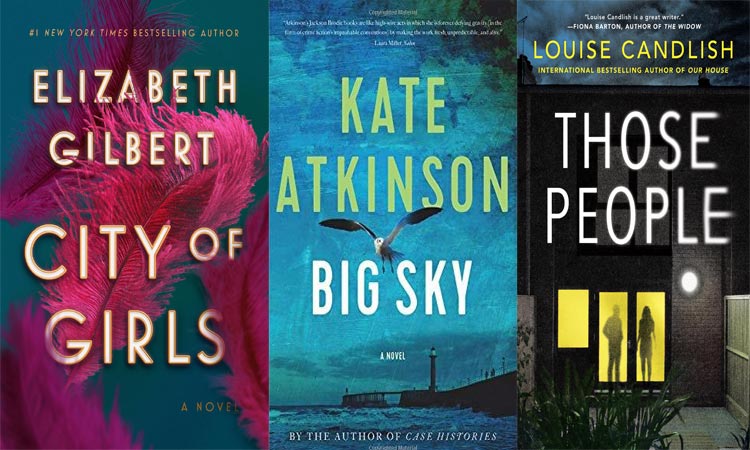 Read on to discover a selection of page-turners and future literary classics.

This year has been a bumper year for novels so whether you like gripping page-turners or literary novels that give you something to discuss over the dinner table, there’s something for everyone.

Our main stipulations were that the novels should be original, compelling and superbly written — the kind of books you’ll want to recommend to your friends.

We’ve chosen a mix of established writers and debut novelists.

The subjects covered in this year’s crop of novels are wide-ranging too — from Clare Mackintosh’s thought-provoking story of a couple faced with an impossible choice about their terminally ill child to Elizabeth Gilbert’s vibrant account of showgirl life in 1940s New York.

So what are you waiting for? Settle back and enjoy these novels.

Jackson Brodie’s back. Fans have been counting the days to read the fifth instalment in Kate Atkinson’s literary crime series about the tough ex-soldier turned private investigator, and Big Sky is well worth the wait.

This time round Brodie has moved to a quiet seaside village in the northeast, occasionally joined by his tricky teenage son and his ex-partner’s ageing labrador.

But once again he gets drawn into a sinister investigation and old secrets come to the fore.

Superbly written and utterly readable, this novel is a delight from start to finish.

Sweet Sorrow is another of this summer’s most eagerly awaited novels.

David Nicholls, who recently won a Bafta for his TV adaptation of the Patrick Melrose novels, made his name with One Day and excels at writing tender, funny books about love and friendship.

This coming-of-age novel tells the story of 16-year-old Charlie Lewis and his love affair with a girl he meets when he reluctantly gets involved in a production of Romeo and Juliet.

It’s poignant and insightful but the most affecting scenes focus on Charlie’s relationship with his dad, whose life has imploded in a disastrous way.

Sally Rooney’s Normal People has won a host of awards, including both the top prize and fiction book of the year at this year’s British Book Awards, the Costa novel award and Waterstones Book of the Year.

The 28-year-old Irish novelist has been described as “a millennial writer with millennial concerns” but readers of all ages will enjoy her story of two college friends who try to stay apart but find they can’t.

We can’t wait to see what she does next.

'Those People' by Louise Candlish.

'City of Girls' by Elizabeth Gilbert.

David Nicholls recently won a Bafta for his TV adaptation of the Patrick Melrose novels.

Madeline Miller won the Orange prize in 2012 for her first novel, 'A Song for Achilles.'

'The Doll Factory' by Elizabeth Macneal.

'The Silent Patient' by Alex Michaelides.

Alex Michaelides was inspired to write his debut novel while he was doing a postgraduate course in psychotherapy and working part-time at a secure psychiatric unit.

It’s the tale of Alicia Berenson, a painter who lives with her fashion photographer husband Gabriel on the edge of Hampstead Heath.

But when Gabriel returns late one night from a fashion shoot Alicia shoots him dead.

Psychotherapist Theo Faber is fascinated by the fact that Alicia has never spoken since the shooting and five years on is determined to discover exactly what happened.

Louise Candlish won the crime and thriller book of the year for Our House and her latest novel is equally gripping.

Lowland Way in south London is a suburban paradise, with friendly neighbours, convivial chat and children playing in the street.

Everything seems perfect till Darren and Jodie move in and cause havoc and upset with their loud music, multiple cars and disruptive building work.

A clever, pacey novel that will keep you guessing right until the end.

Ex-police officer Clare Mackintosh has won legions of fans for her clever crime novels, I Let You Go, I See You and Let Me Lie.

Her new book, After the End, is a radical departure, but just as powerful.

Max and Pip are devoted to each other but when their young son Dylan is diagnosed with a brain tumour they face an impossible choice — and they can’t agree.

This moving and thought-provoking theme is one that’s close to Mackintosh’s heart.

As she explains in a note at the end of the book, in 2006 she and her husband had to decide whether to keep their critically ill son alive or remove his life support.

Candice Carty-Williams wrote her debut novel after bestselling author Jojo Moyes offered her the use of her rural cottage to finish the book, choosing her from more than 600 applicants.

Queenie Jenkins is a young black woman who’s just broken up with her long-term boyfriend, Tom.

Her boss at the newspaper where she works doesn’t appreciate her and her family never listens (they’re not interested unless the conversation is about Jesus or water rates).

A fresh, funny and at times painful read.

It’s astonishing to discover that this accomplished book is Elizabeth Macneal’s debut novel.

Macneal is a writer and potter and worked in the City for several years before completing a creative writing MA at the University of East Anglia.

Set amid the squalor and chaos of Victorian London, The Doll Factory is the tale of aspiring artist Iris, who becomes a model for Pre-Raphaelite artist Louis Frost on the condition that he teaches her to paint.

But she’s also been noticed by Silas Reed, a sinister collector who is obsessed by strange and beautiful things.

An atmospheric book that will stay with you long after you’ve finished reading.

Elizabeth Gilbert is best-known for Eat Pray Love, the 2006 memoir that chronicled her journey across Italy, India and Indonesia.

In City of Girls, her third novel, she turns her attention to 1940s New York and a rundown, midtown theatre called The Lily.

Nineteen-year-old Vivian Morris has dropped out of her sophomore year at Vassar and her despairing parents send her to stay with her unconventional Aunt Peg, who owns The Lily.

Once there, Vivian makes firm friends with the showgirls, throws herself into their hedonistic lifestyle and learns some tough lessons.

Madeline Miller won the Orange prize in 2012 for her first novel, A Song for Achilles and earlier this year Circe, her long-awaited second novel, was one of the six shortlisted contenders for the Women’s Prize for Fiction.

Miller takes the legendary story of Circe, who appeared in ancient Greek texts like Homer’s The Odyssey, and brings it alive for a 21st century audience.

A captivating book that races along with verve and panache.

Kate Atkinson never disappoints and Big Sky, her fifth Jackson Brodie novel, is the standout read of the summer.

It’s a masterclass in brilliant writing and whether you’ve read the earlier books in the series or not you’ll enjoy it.