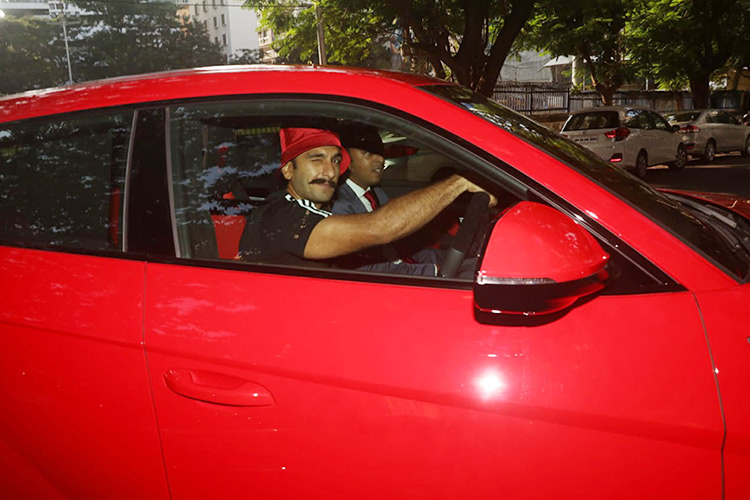 Ranveer Singh is literally painting the town red these days. The actor has bought a sparkling red Lamborghini Urus that has cost him Dhs787,200, and he can be seen zipping all around town on the streets of Mumbai lately.

On Thursday, Ranveer looked like he was in the mood for a spin in his cool car. He took to the steering wheel and zipped out on the roads. Eyewitnesses who saw Ranveer's Lamborghni zoom past recall seeing the actor match the mood with a natty velvet hat, but without a permanent registration number on his plate yet.

Experts in the knowhow of mean machines say the stylish Urus is the world's first Super Sport Utility Vehicle - SSUV, if you please.

Meanwhile Ranveer was spotted making a pit stop at Sanjay Leela Bhansali's office on Thursday, sparking off guesswork f he is going to sign yet another film with the man who gave him blockbusters such as "Goliyon Ki Rasleela: Ram Leela", "Bajirao Mastani" and "Padmaavata.

The actor wore blue pants and a hoodie, accessorised by shades. He is wearing a defined moustache these days, and carried a boombox.

Ranveer's last release "Gully Boy" has been selected as India's official entry at the Oscars this time. He teams up with wife Deepika Padukone in Kabir Khan's "83" scheduled to release next year. The film is about India's World Cup win in cricket in 1983. Ranveer plays the team's captain Kapil Dev. Deepika plays Kapil's wife, Romi.