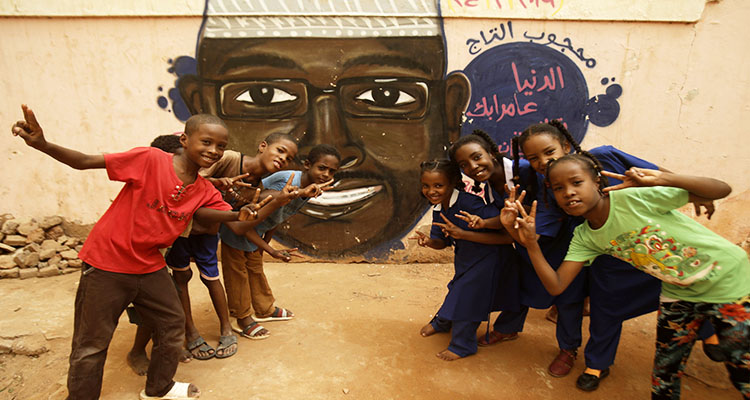 Pupils gesture in front of a mural painting of a protester killed during anti-government protest.

"The painting keeps him alive.

The portrait is part of a campaign launched by Sudanese artist Assil Diab to draw murals and graffiti to commemorate demonstrators killed in the months-old protest movement that has rocked the northeast African country.

These murals are specifically drawn on the walls of protesters' own homes or in their neighbourhoods.

The colourful graffiti is part of a campaign to draw faces of protesters killed.

Adawiya Mohamed, the mother of Babikir Anwar is pictured in front of her son's mural painting.

Sudanese artist Asil Diab, is pictured in front of a mural painting of Mohamed Mattar.

Maiyssa Omar, mother of Walid Abdelrahim and Sudanese artist Assil Diab, sit in front of the mural painting of Abdelrahim.

Diab, a former employee of Doha-based Al-Jazeera television network, and her team got their motivation from a protest catchcry: "Our martyrs didn't die, they are alive among the revolutionaries!"

"Graffiti makes martyrs come alive and reminds people of them even if the people themselves did or did not support the revolution."

For years such artwork remained underground amid censorship imposed by heavy-handed security agents of Bashir's regime, who considered it anti-establishment or pure vandalism.

A student in Britain, Mattar was back to visit family and had just celebrated his 26th birthday when he decided to spend a night with the demonstrators at the sit-in. 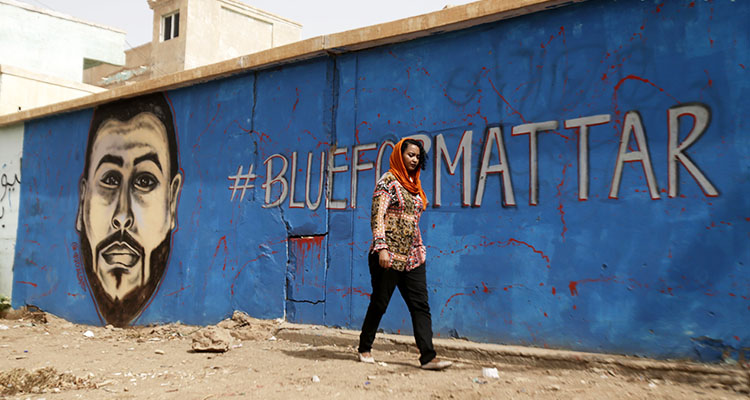 His death in the raid had evoked a campaign of solidarity on social media under the hashtag #blueformattar.

Some of the paintings Diab has drawn are also of protesters killed in a September 2013 crackdown on anti-austerity rallies.

They include Babikir Anwar whose face Diab has drawn on a wall of his family's home in the neighbourhood of Shambat.

"We will not forget you Bakur," is written below the painting, referring to his nickname.