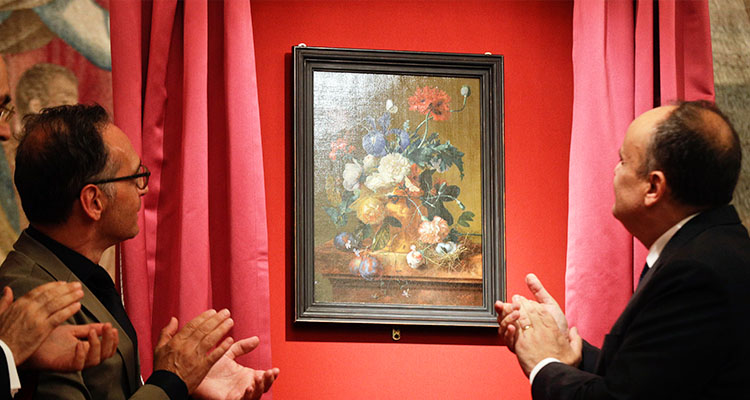 German Foreign Minister and Italian Culture Minister watch the unveiling of the "Vase of Flowers."

Vase of Flowers, valued at around 10 million euros, belongs to Pitti Palace and was one of boxes of artworks that were looted by soldiers in 1943.

On Friday, it was returned to the place where it had previously hung more than a century, after a long judicial battle between Italy and Germany, Efe news reported.

"I want to make a plea to Germany: We hope that in 2019 the famous Flower Vase by Dutch painter Jan van Huysum, stolen by Nazi soldiers during the Second World War, can finally be returned to the Uffizi Galleries in Florence," he said in a statement at the time.

Germany returned the Dutch still-life after it was stolen by Nazi troops during WWII.

Vase of Flowers, valued at around 10 million euros, belongs to Pitti Palace.

The stolen painting has been returned to its rightful home in Florence.

"Currently, the painting is owned by a German family that, after all this time, has not returned it to the museum yet, despite several requests from the Italian state."

He also hung a black and white photo of Vase of Flowers, by Dutch artist Jan van Huysum, in the gallery, with the word "stolen" in English, German and Italian.

For 100 years, the canvas was exhibited in the gallery until in 1940 it was taken to the Medici villa in Poggio a Caiano and in 1943, for fear of looting, was hidden in the villa Bossi Pucci with other masterpieces.

Nazi troops stole thousands of artworks from Italian museums as they retreated through the country that year.

Many of them have been recovered but there are still 1,653 important works, paintings, tapestries, sculptures and Stradivarius violins that have not been found, according to journalist and writer Salvatore Giannella who penned a book about looted art.

Some have been located and even exhibited in European museums but others have disappeared completely.