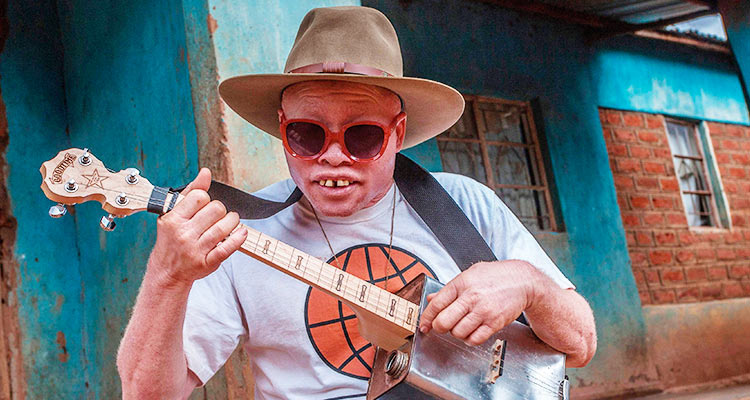 Chigwandali is an albino, releasing a professional album and the star of a documentary produced by Madonna.

Albinos are often targeted in brutal attacks in Malawi and other southern African countries because they have white skin due to a hereditary condition that causes lack of pigmentation.

"The album talks about the plight of persons with albinoism. How people should not stigmatise others.

Despite the risks, Chigwandali, 39, has been out in front of the public for years playing his upbeat tunes on a homemade banjo and a drum that he hits with a pedal operated by his right foot.

Chigwandali, who sings in the local Chichewa language, draws on his tough upbringing for his music, telling of constant harassment, suspicion and the threat of physical attack.

"Growing up, people didn't want us being close to them because of our skin," he told AFP.

Albinos are often targeted in brutal attacks in Malawi.

Lazarus Chigwandali, poses with his sons Layijo and Joseph before leaving his home.

Chigwandali is an albino, releasing a professional album.

Chigwandali's music stands out on its own -- energetic with sharp vocals that catch everyone's attention as they walk by.

Hugo, the Swedish producer, was so impressed by the video clip that he tracked down the Malawian busker and offered to record his music.

"A few golden times in life something blows you away in such an amazing way you just cry and laugh and shake your head," Hugo said later on social media.

Ikponswa Ero, the UN's chief expert on albinoism, told AFP that Chigwandali was playing a unique role in tackling prejudice against albinos.

And Malawi, one of the world's poorest and most aid-dependent countries, has experienced a surge in violent attacks on people with albinoism.

In a report last year, Amnesty International said that since November 2014 there had been 148 crimes reported against people with albinoism, with at least 21 deaths.

For Chigwandali, he says his "recent status as a famous musician has made it difficult for me to be a target because I am more prominent. So, now I go to the village without the fear of being abducted."