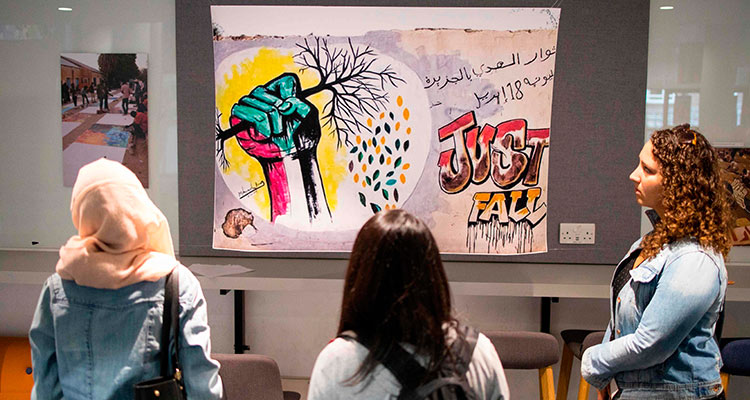 People look at pieces in the Art of the Sudanese Revolution exhibition.

At a central London university space turned into a temporary gallery the work brought in a lot of students and art lovers.

"Unfortunately a lot of this artwork has already been erased... we were lucky enough to have some pictures.

The exhibition features pictures of street art made during the uprising against longtime president Omar al-Bashir.

At least two of the works were said to be inspired by legendary British street artist Banksy.

Ahmed Hashim, one of the organisers of Art of the Sudanese Revolution exhibition poses.

The organisers are also hoping for support as well as appreciation for the art.

Some of the artists are known and some of them are missing after the sit-in.

Jumana Amir, 20, a student in Cardiff, Wales who came to Britain from Sudan aged three, travelled to London to see the 30 or so images on display for two days at SOAS, which specialises in the study of Asia, Africa and the Middle East.

She was already familiar with some of the artworks after glimpsing them in videos of the sit-in protests shared by relatives.

"Unfortunately it's all gone now but I'm here to see it," she said, wearing the red and green colours of Sudan in her hair braids.

"It made me very emotional," Amir added.

"I really like the ones that are very woman-empowering, because in my opinion women (took) a very big role in the whole revolution." 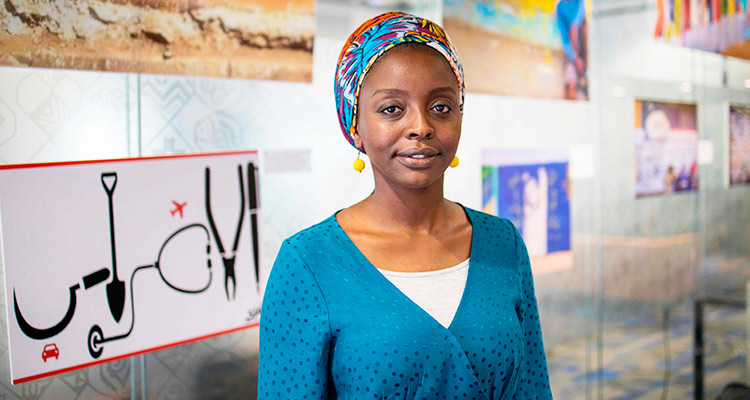 Marwa Gibril, one of the organisers of Art of the Sudanese Revolution exhibition poses at at SOAS University in London.

Gibril, the organiser, noted some works were anonymously created while others were signed.

"Some of the artists are known and within the ones who are known some of them are missing after the sit-in," she said.

"They were never found so we don't know if they're alive or dead."

'Artists are our biggest weapon'

At least 136 people have been killed in Sudan since June 3, including more than 100 on the day of the raid, according to doctors close the protesters.

The health ministry says 78 people have been killed nationwide over the same period.

"Their bullets will not kill us, what kills is your silence," said another by the exit.