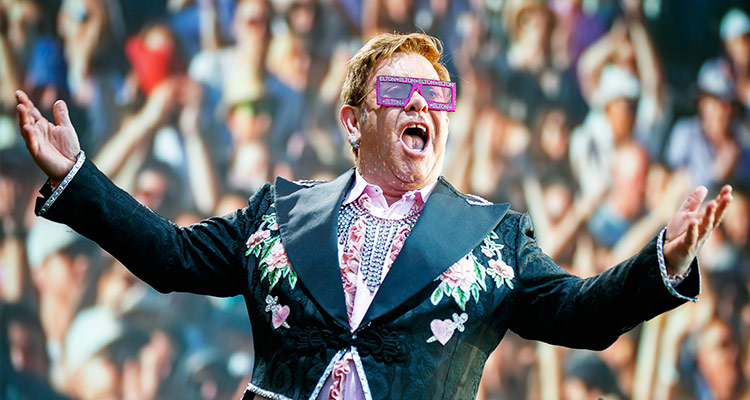 "I've wanted to play this festival for years and years. I've watched it on DVD and television. I never thought I would be playing it, but it is an honour to be here," the 72-year-old told a sell-out outdoor crowd of 15,000 who braved a heat wave.

The five-time Grammy winner, seated at the piano centre stage, wore large black frame glasses with his name spelled out in rhinestones and a black jacket with sparkling trim.

"Sorry", "Someone Saved My Life Tonight", "Candle in the Wind", "Daniel" and "Saturday Night's Alright" were other signature songs, accompanied by his band including longtime drummer Nigel Olsson and guitarist John Jorgenson.

Elton wore large black frame glasses with his name spelled out in rhinestones.

He delivered a slick and energetic performance that ended with a message of tolerance and love.

John performed at La Saussaz stadium overlooking Lake Geneva, rather than the famed Stravinski Auditorium, an intimate venue renowned for its acoustics, where he was initially booked for two nights when the tour was first announced.

"This was imposed on us," a Montreux insider told Reuters about the first-ever open-air concert of the Swiss festival.

Festival goer Sebastien Cordey, 37, said afterwards: "I'm not a big fan of Elton John. But he had great energy on stage and his voice is still incredibly strong."

John said on Friday he was deeply upset by Russian President Vladimir Putin's comment that liberal values were "obsolete" and had been rejected by the majority of people in Western nations.

"We should appreciate each other, we need to embrace everyone even if we do not agree with each other," he said.

John said he met Jones before the show.

"I love him very much, the man and the musician. ... He is still as vibrant as a teenager", John said, dedicating the song "Don't Let the Sun Go Down on Me" to the legendary American producer.