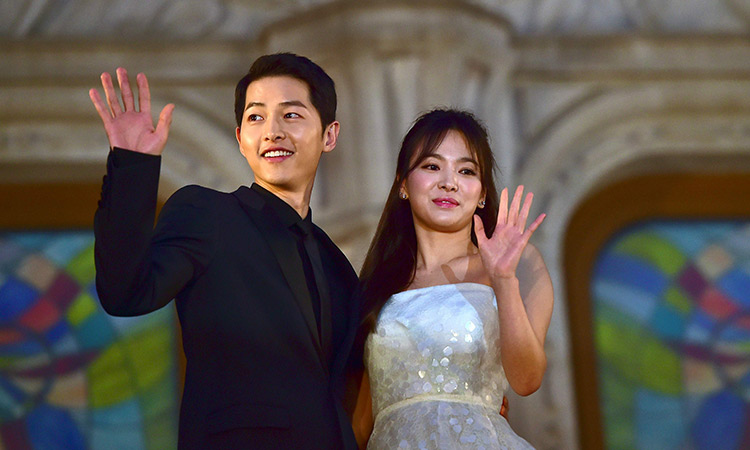 Fans of Korean drama on Thursday mourned news of a divorce between two celebrities who turned real-life lovers after starring in the hit TV series "The Descendants of the Sun".

Leading lady Song Hye-kyo, 37, and heart throb Song Joong-ki, 33 were seen as Asia's answer to Brad Pitt and Angelina Jolie, and, like Brangelina, even got their own joint moniker -- "Song Song couple".

The pair played the leads in the 2016 military romance that took Asia by storm, garnering billions of views on Chinese video-streaming sites and winning a thumbs-up from Thailand's junta chief, who praised the main characters' sense of duty.

"The Descendants of the Sun" tells the story of an army captain sent on a peacekeeping mission to a fictional war-torn country, Uruk, where he meets and falls in love with a surgeon working with a medical NGO.

The 16-episode series was hailed as reviving the so-called "Hallyu", or Korean Wave, of K-pop and K-dramas that spread across Asia and beyond since the early 2000s.

The actors wed in a star-studded ceremony in Seoul in October 2017 and their high-profile marriage had since been closely followed by media.

But on Thursday, Song Joong-ki said he had begun legal procedures to end their marriage.

He apologised to fans and did not give a reason, adding: "Rather than blaming and criticising each other, I wish to end the marriage in an amicable manner."

In a separate statement, Song Hye-kyo asked the public to avoid "speculative media reports and comments" on the split.

Divorce was once frowned upon in the South's traditionalist society but is now more accepted, particularly in younger generations.

News of the divorce, which broke Thursday morning, dominated both the South's Naver portal, with six of its top 10 search terms linked to it, and Twitter in the country, where the top four trending words were related.

Fans mourned the end to the high-profile love story.

"I can't believe Song-Song couple is getting a divorce," one fan tweeted.

Another asked: "So they just got married because of temporary emotion?"