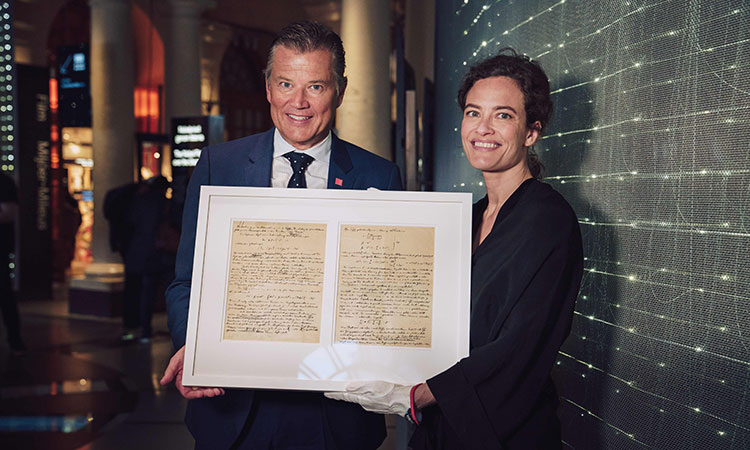 Per Taube and Erika Lanner, with the handwritten two-page document by Albert Einstein. AFP

The Nobel Museum in Stockholm has been gifted Albert Einstein's first paper published after he received the Nobel Prize in 1922 and discussing his then still controversial relativity theory.

Swedish businessman Per Taube bought the handwritten two-page document at an auction for 1.2 million krona (110,000 euros) in December last year.

He has now made good on his promise to gift the manuscript to the Nobel Museum, which will put it on display in a glass frame this autumn.

Incomprehensible to many, the text is a rebuttal of an article by German mathematician Erich Trefftz debating the "large-scale geometrical structure of the universe" — notably the forces and masses separating and enveloping celestial bodies.

Trefftz claimed he had found a "static" solution to Einstein's theory of general relativity. 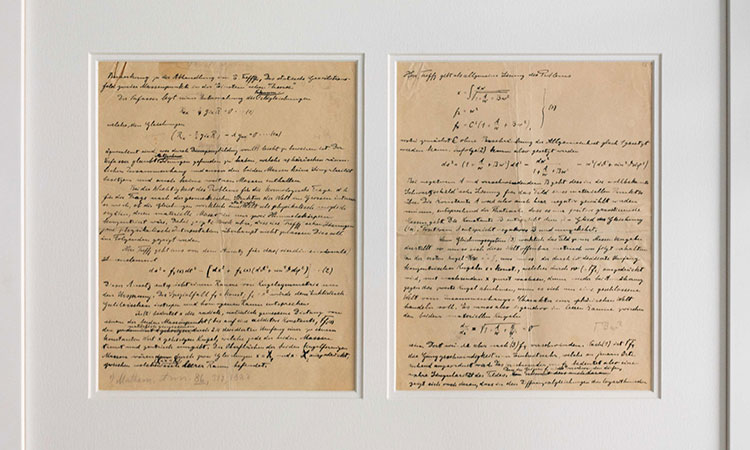 However, Einstein rejected the hypothesis in a series of complex equations, concluding: "It became apparent... that Trefftz's solution does not permit this physical interpretation at all."

Significantly, the document contains a modified version of the relativity theory and shows that Einstein was facing fierce resistance within the scientific community.

"This letter shows that even though Albert Einstein had received the Nobel prize, his physics was very much part of the debate among scientists at that time and Albert Einstein himself was also part of this debate," Gustav Kallstrand, senior curator a the Nobel Prize Museum, said.

Moreover, Einstein received the Nobel Prize of Physics on November 10, 1922, for his discovery of the law of the photoelectric effect, not for the relativity theory.

The paper also has handwritten editor's annotations by German physicist Max von Laue who won the Nobel Prize in 1914.

Von Laue owned the manuscript until 1948 before it passed into the hands of private collectors.

For Kallstrand, Einstein — who was born in 1879 and died in 1955 — remains "the archetypal image of a scientific genius".

"If you say 'scientist', most people will get an image in their head of Albert Einstein."