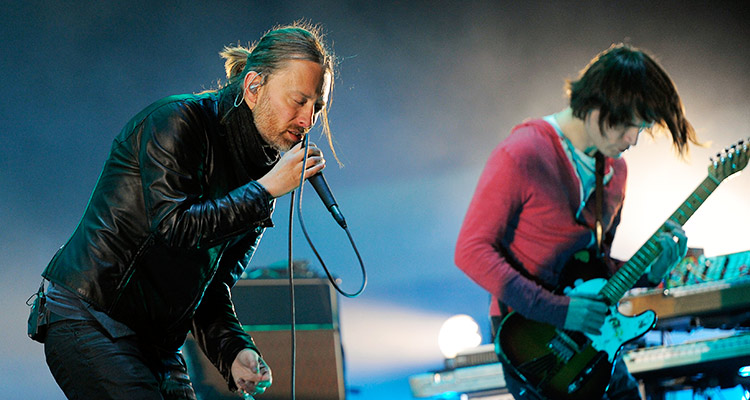 Thom Yorke and Jonny Greenwood of radiohead perform during the band's headlining set.

The genre-banding English musicians uploaded the 1.8-gigabyte collection of recording session outtakes and rare live performances on their radiohead.bandcamp.com website.

The songs can be accessed online for free.

The group is also selling downloads of an album of the 18 hacked MiniDiscs for £18 ($22.90, 20.20 euros) and donating the proceeds to the Extinction Rebellion environmental campaign group.

"We've been hacked," frontman Thom Yorke's wrote on the website.

"It's not v interesting," he added. "As it's out there it may as well be out there, until we all get bored and move on."

"Someone stole Thom's minidisk archive from around the time of OK Computer, and reportedly demanded $150,000 on threat of releasing it.

"So instead of complaining -- much -- or ignoring it, we're releasing all 18 hours on Bandcamp in aid of Extinction Rebellion," he wrote.

News of the hack first emerged on a Radiohead discussion page of the Reddit website last week.

"This is a bit of a doozy," a user identified only as u/santicol wrote.

The user described how someone claiming to have the archive came in contact with a "well known leaker" and offered them previews of the tracks.

The collection includes demo versions of "OK Computer" music and a few songs that never made the cut.

The critically-acclaimed album earned Radiohead their first Grammy and was followed by a world tour that gave them lasting international fame. 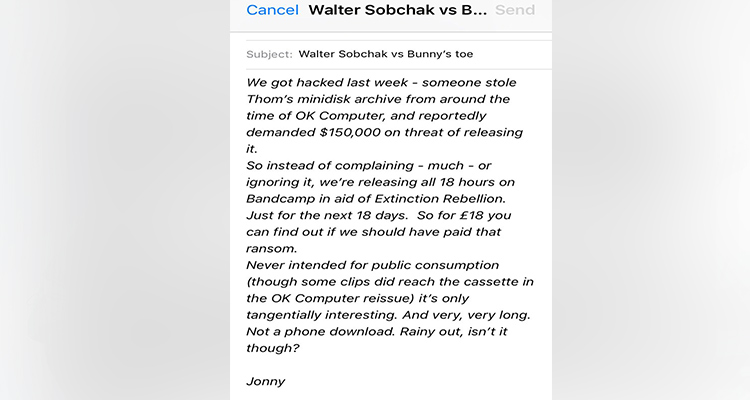 Radiohead have campaigned passionately for environmental causes and feature songs about climate change.

Its best selling single was "Karma Police" -- one of the most instantly-recognisable tunes of the 1990s and a staple of parties for the subsequent 20 years.

"The leaker seems to be well known in some spaces and has a history of trading in very rare/high profile material," the Reddit user wrote.

Radiohead were formed in 1985 and debuted their genre-bending hit single "Creep" in 1992. They were inducted into the Rock and Roll Hall of Fame in March.

"It can be awkward and challenging sometimes," band songwriter Philip Selway said at the induction ceremony.

"But I guess that's what kept us all interested for the past three decades."

Radiohead have campaigned passionately for environmental causes and feature songs about climate change.

They stopped using disposable cups on tour in 2008 and began filling their tour buses with biofuels.

Their highly-disruptive but peaceful protests brought parts of central London to a standstill for 11 days in April and saw police make more than 1,000 arrests.