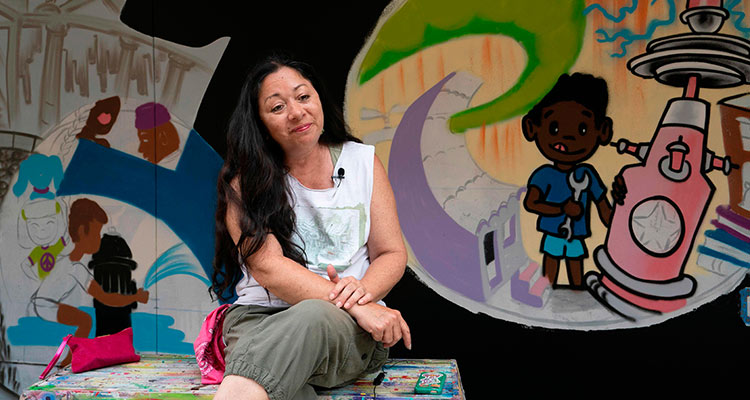 When she began painting graffiti on New York subway cars at the age of 15, Lady Pink stood out as one of very few women in that illegal and dangerous subculture.

That was in 1979. Now, in her mid-50s, this petite woman with long, dark hair and hailing from the Amazon jungle in Ecuador has been making an above-board living from her art for decades and proudly declares herself a businesswoman. She has been called the "First Lady" of graffiti.

"New York was ruined. There was a lot of crime and corruption, and everything looked terrible. We adolescents set out to beautify the city," Lady Pink — real name Sandra Fabara — said in an interview in the Bronx, where she is painting a mural on the wall of Casita Maria, a community center for young Hispanics. 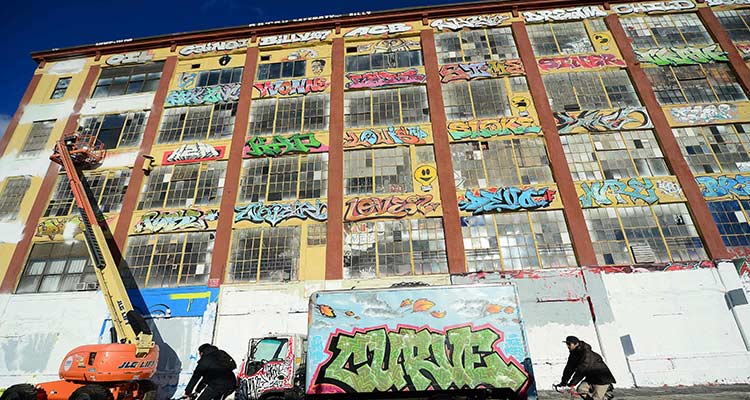 Fabara began to exhibit her work in galleries at the age of 16.

Whereas the teen-aged Fabara had to dodge the authorities as she practiced her craft, she now is being guarded by a policeman while she paints, because an angry neighbor made a death threat against her.

A court ruled last year that the artists should receive $6.75 million in damages for the loss of their work; New York law protects public art of "recognized stature."

A man passes by as artist Lady Pink, paints a mural at Casita Maria.

A group of women pass by as artist Lady Pink, paints a mural.

The judicial system has never been very fair with graffiti or street artists.

But the owner of the building, who eventually tore it down to build luxury condos, appealed and there is still no final verdict.

"The judicial system has never been very fair with graffiti or street artists. I do not expect it to be now," said Fabara.

Lady Pink got into this kind of thing when her first boyfriend, a graffiti artist, was arrested.

"I would crawl out the window with a bag of paint and go to the roughest neighborhoods of New York in the middle of the night, all alone, to meet up with my friends and go to an even worse neighborhood where they park the trains. We would go into the train tunnels and dark alleys where God knows what awaits you," Fabara said of the period, from 1979 to 1985. 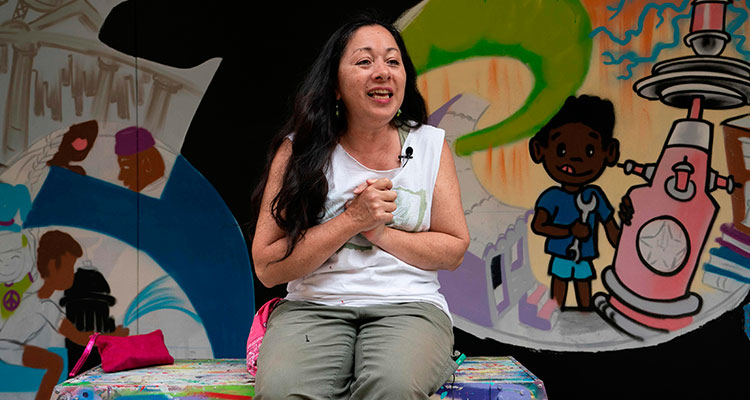 She said it has become even riskier since the terror attacks of September 11, 2001. "For painting a subway car you are more likely than anything to get shot in the back. People will think you are a terrorist."

Of her success, Fabara says she met the right people at the right time. She began to exhibit her work in galleries at the age of 16.

She said she was invited to parties with artists like Andy Warhol, Keith Haring and Jean-Michel Basquiat, and was included in books and movies.

"It was an adventure, a kind of adolescent wildness, and of course I still miss it," said Fabara.

But with the passage of time and with art as a profession, her work now "is more a question of business and earning a living and inspiring young people. That, too, is exciting and fun for me."

"I am an artist, but above all I am a businesswoman," she said.

"They did not find any crime. Nothing," she said. "New York has become a police state. It is hostile to artists."