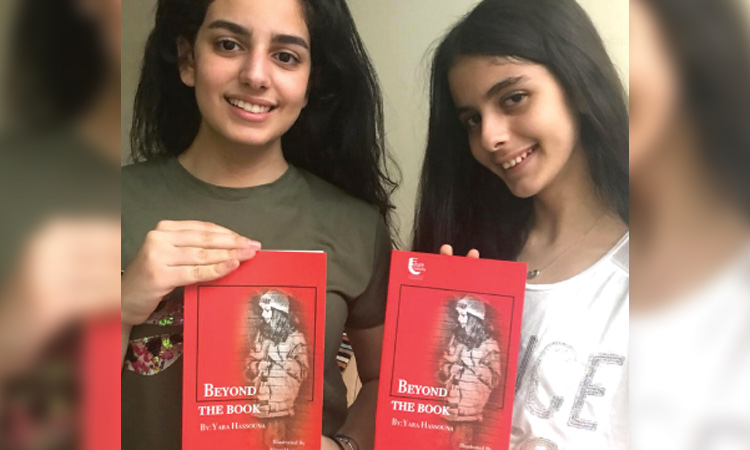 Across time, we have been enjoying the creations of writers, poets and other talented persons. Who can ever forget the Poets’ Prince Ahmed Shawki, the Nile Poet Hafez Ibrahim, or Al Atla’al poet, sung by Umm Kulthum, doctor Ibrahim Nagy? They are all names which enlightened the history of poetry during a time when people needed that kind of art.

It is undoubtedly that every age has its talents in all fields of life and they are inspired by the masters. One such inspired-talent is a young girl named Yara Hassouna. Yara, a 12-year-old poet, has recently published her first collection of poems entitled “Beyond the Book.” In the book, a sense of hope appears in the vocabulary, enriching it with a full vision and luminosity.

Yara’s poetic collection delves into the observation of things around and reflects the writer’s idea of reality. Yara said she used to make the idea shine in her mind and then turn it into a poem, which depicts and paints reality with a shaded imagination.

Despite her young age and little experience in writing, Yara establishes for herself tools of the poetic creativity through this collection, in which she shows her unique skills of selecting the poetic themes, and the spontaneous emotional expression of what is around her in reality.

The book, which helps motivate aspiring writers, sheds light on some of Yara’s favourite poems and fragrances it with her ambition to publish more books.  With these poems, Yara addresses the heart with ideas in the form of an emotional stroke, and at the same time addressing the minds through the passionate search for what is behind things. Alongside  this, she expresses her innate criticism of some social phenomena.

The collection includes 73 texts, which reflect the worlds of the young poet in school, at home and within her family. It also looks at many aspects of life, showing Yara’s skill not only in describing objects and scenes but also in the ability to formulate texts rich in ideas.  For example, in one of the texts, Yara says each girl shines like a pearl, so she does not need to beautify others, because she has a unique power, beyond her beauty.

In the same text, she tells her peers there is a necessity to possess the awareness beautifying the innate nature of each of them. She added, “It is enough for her to look at the world with a smile revealing the beauty of the soul.”

The text also condemns ‘girls’ excessive interest in cosmetics and fancy toiletries. In another text entitled “Three Identities,” the poet expresses her pride in belonging to three countries, Egypt, Lebanon and the United Arab Emirates. She expresses her great love for the three countries with the words: “Egypt, Lebanon and the Emirates ... countries in which I am overwhelmed by happiness and my heart. They are, for me the key and the stories ... In them I was born and grew up like a tree ... I knew the meaning of joy and freedom ... and I will not go away from them.”

A text entitled “Face Masks” reflects the depth of the poetic narration of  Yara, where she sees that a person has more than a mask expressing his different feelings, whether sadness or joy. The person selects his mask according to his temperament and psychological state. Yara was an award winner in March 2018 (second place) in the Oxford University Press Story Writing Competition at the 10th Emirates Airline Festival of Literature-Arabic language-(11& Under Age Group).

She said she dedicated the book to her generation and to everyone who experienced various situations throughout their life time, where they were sad, dramatic, funny, or joyful. “I hope every person holding this book right now, reading its meaningful content, hope they enjoy it very much,” Yara noted. It is not surprising that the sister of such a talented young poet, Nour Hassouna, was the designer of the book cover and the illustrator of all the images. Yara is a student at Al Mawakeb school, Garhoud Dubai, since kindergarten. She is the daughter of an Egyptian father and a Lebanese mother.

Yara’s passion for reading started at an early age, so did her writing skills.