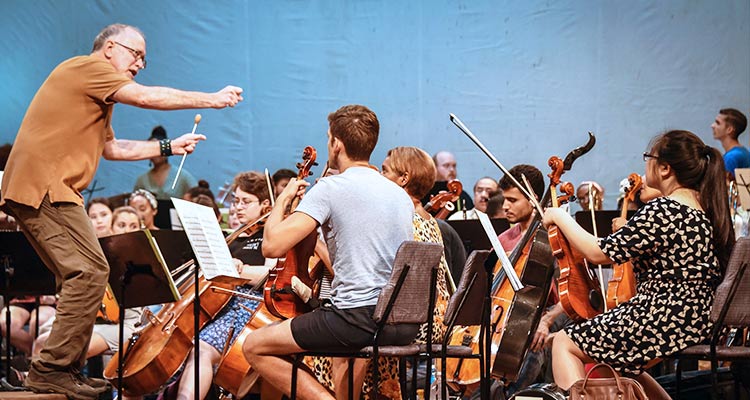 Baton in hand, conductor James Ross mixes English and Spanish to set the rhythm for his orchestra of young Cuban and American musicians playing in a convivial atmosphere that contrasts sharply with the diplomatic tensions between their countries.

"From the first moment, there's been a generous exchange with lots of heart.

"It's a group of 30 Americans and at least 40 Cubans searching for harmony," said Ross.

Either music students or young professionals, they are all aged between 18 and 24.

This is 24-year-old American Chris Beroes-Haigis's first trip to Cuba.

"It's been an unforgettable experience so far. Cuba is a country that's very rich with cultural history and amazing people and incredible music," he said, holding his cello.

Almost 100 Cuban and US young enthusiast musicians learn to play together in spite of the diplomatic dispute between their countries.

Either music students or young professionals, they are all aged between 18 and 24.

Cuba is a country that's very rich with cultural history and amazing people and incredible music.

It's a powerful message at a time of increasing tension between Washington and Havana.

Cuban musicians were also supposed to go to the US to play, but that has happened only once -- in 2017.

He says he's "learning a little bit" of Spanish, while alongside him 20-year-old Cuban clarinetist Maria Laura Terry Zamora says she speaks "a tiny bit of English."

But that's no barrier, as "music is a universal language," says Terry.

This weekend, they will play two concerts, one in Havana and the other 100 kilometers (60 miles) away in Matanzas.

They will perform one American piece, "Billy the Kid" by Aaron Copland, and two Cuban compositions -- one by Guido Lopez-Gavilan and another by Jorge Amado Molina, a violinist in the orchestra.

It's a powerful message at a time of increasing tension between Washington and Havana, which could have scuppered a project that began in 2014 during warmer bilateral relations under Barack Obama's presidency.

That environment encouraged a number of American artists to visit the island nation, notably the Minnesota Orchestra, which performed two concerts in Havana in 2015, after an 85-year absence. 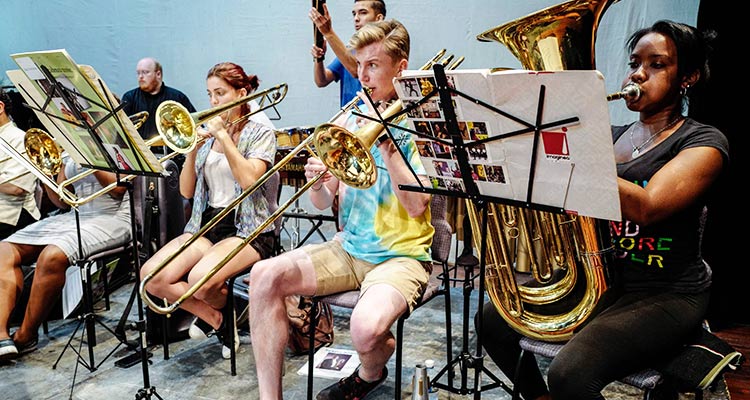 Members of the Cuban-US Youth Orchestra rehearse at the National Theater of Havana.

'Foot in the door'

However, with the change of government in Washington came a more challenging environment in which to pursue such collaboration.

"In the beginning it was very different because things were politically very open and there was so much optimism in the air between our two countries," said Kraut.

"Then things changed, especially in our country, in the United States, so we became even more determined to keep a foot in the door so it would not close between the US and Cuba."

Since the arrival of Donald Trump, the White House has adopted a tougher stance on Cuba than predecessor Obama, ramping up sanctions against the communist government to punish it for supporting Venezuela President Nicolas Maduro.

On the Cuban side, the young musicians are just as determined as Kraut to maintain the links.

It's not the first time that musicians from the two countries have played together, but "this time there's a very special flavor to this union," says Dayana Garcia, the Havana orchestra director.

"I think it's very brave, and wonderful and opportune to choose moments like this to defend the fact that we can continue together."