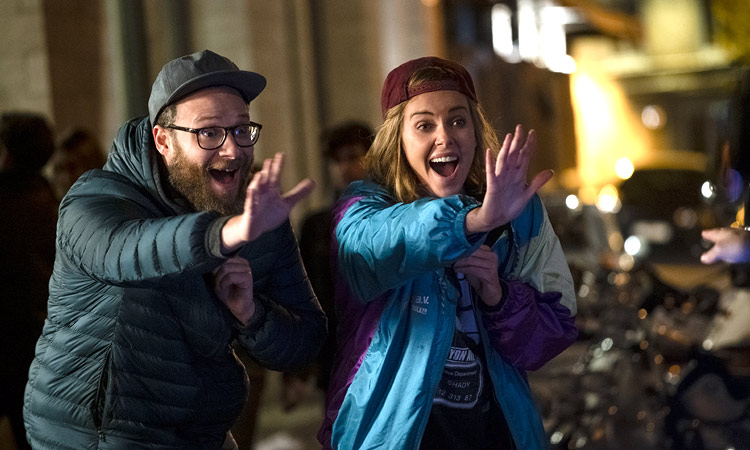 In a summit of international proportions, the new movie ‘Long Shot’ brings together the combined talents of Seth Rogen and Charlize Theron, both as stars on-screen and capable, committed producers behind the scenes.

Theron plays Charlotte Field, the current US secretary of State preparing for a run for the presidency. Rogen plays Fred Flarsky, an idealistic muckraking journalist for an alternative newspaper.

The two know each other from childhood, and after she hires him to be her speechwriter, they find a mutual attraction blooming.

With their combined forces, Theron and Rogen have created a mid-budget romantic comedy with political undertones populated with believable people in what feels like the actual world. In other words, a list of things modern Hollywood rarely delivers.

“I think it’s exactly the kind of movie we should be making in Hollywood, but it’s definitely the type of movie that people say doesn’t get made a lot and it for sure gets made less than it used to,” said Rogen.

The unlikely mix of comedy, romance and politics, which Lionsgate releases in theatres this week, is a collaboration between the stars’ producing teams: Rogen and his partners Evan Goldberg and James Weaver, along with Theron and her partners A.J. Dix and Beth Kono. 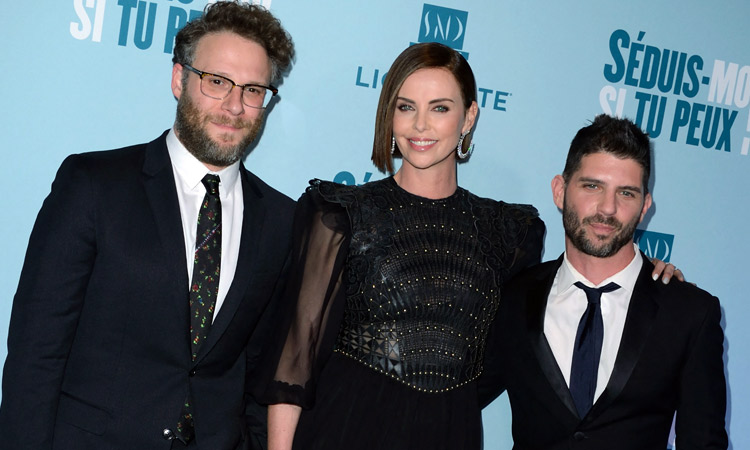 “Not in the boring sense of not challenging each other, but where we really truly wanted to make the same movie. I think that’s sometimes the biggest struggle to overcome … you’re looking at the other person, and the problem is we are not making the same movie here. And we never had that problem.”

“It was so great, the input that Charlize and the other producers on her team brought to the table,” said Rogen.

“It wasn’t just like some actors who are producers and only look at it through the lens of their character — it’s almost like they build whole companies around protecting their character, which is not always the best thing.

But that wasn’t at all what this was like, it was really for the betterment of the movie and the goal we were trying to achieve.”

Director Jonathan Levine had previously worked with Rogen on ‘50/50’ and ‘The Night Before,’ but had not worked with Theron. He found the presence of two stars who were also engaged producers to be invigorating.

“I value the support and consultation of my partners,” said Levine. “I have in Seth one of the greatest comedy storytellers in the history of the medium. That makes me look better to be able to turn to him and ask him what he thinks or to just have him tell me what he thinks. And I’m either secure enough or so insecure that I just listen.”

Levine added, “What I loved about the idea of the movie is it almost felt like a throwback to an old Hollywood kind of thing where you get these two different romantic personas and the strange juxtaposition of the two of them is actually what makes the thing work.

The secret power of the movie is the fact that they are different.”

That combined sensibility on ‘Long Shot’ pitches the film somewhere between irreverent and credible, and sometimes both — as in the comedy centrepiece in which Fred and Charlotte take a banned substance to unwind and an international hostage crisis breaks out. 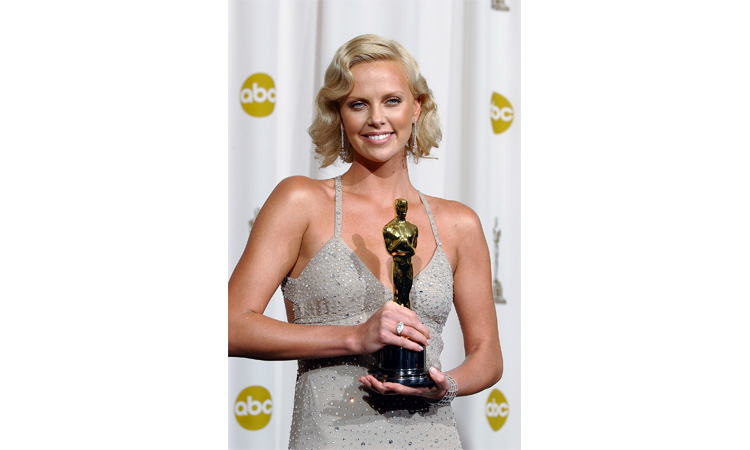 Theron was named Best Actress in a Leading role for ‘Monster’ (2004) at the Academy Awards. TNS.

Sterling, who previously worked on ‘The Daily Show’ and ‘The Sarah Silverman Program,’ initially wrote the earliest versions of ‘Long Shot’ as a way of working out his own feelings of not being where he wanted to be in life.

After working with Rogen on ‘The Interview’ the project became revived and Theron was involved by then too. “I think that the writing is not the star here,” said Sterling. “I think it is the chemistry of Seth and Charlize, just every scene in the movie is them.”

Hannah came on the movie in summer 2017, a few months before shooting and barely 36 hours after wrapping production on ‘The Post.’ She had previously worked for a number of years at Theron’s production company and was brought to the project specifically to bolster the character of Charlotte.

I had a horrible fear that I would be in a Seth Rogen movie and be the girl, who just stands there.

“The thing I kind of love about the film is that it is really funny and it does have the high jinks,” said Hannah. “But I also think it is very grounded in what it means to be running for president of the United States as a woman.

And the struggle for what it’s like to be a woman in a man’s world and the level of criticism that you are given sometimes more so than your male compatriots. I think that was something that I definitely was tasked with when I came on board.”

At the film’s raucous world premiere during the South by Southwest Film Festival in March, the R&B group Boyz II Men — who appear in the movie — came out to perform two songs, with Theron and Rogen dancing at the side of the stage.

During a short Q&A, Theron said, “I had a horrible fear that I would be in a Seth Rogen movie and be the girl, who just stands there.”

Sitting alongside Rogen in a hotel suite in Beverly Hills on a recent afternoon, Theron attempted to clarify her comments, noting, “Let’s be frank, I was not sober. I was very nervous.

“What I was trying to say is that I definitely had a fear of not feeling like this genre is my strength,” Theron said. “I definitely think it’s a by-product of just being a woman in this industry and that for years we have been let down and when somebody is selling us something in the room, the bill of goods never turn out to be what it was in the room. And, listen, that’s happened to me before. So I think it’s a valid fear for women to have.”

“I was not insulted by that statement, by the way,” added Rogen.

“Well, it’s the utmost compliment because while we were making this movie, they elevated my character,” Theron continued. “And that wasn’t happening 10 years ago for me. I was usually the only person trying to do that and it was really nice to be in a room and have a bunch of guys want that for me, that’s an incredible feeling to have.

“I am angry at other men,” Theron added, dryly, suddenly bringing to mind that she also played Imperator Furiosa in ‘Mad Max: Fury Road’ and a deadly assassin in ‘Atomic Blonde.’ 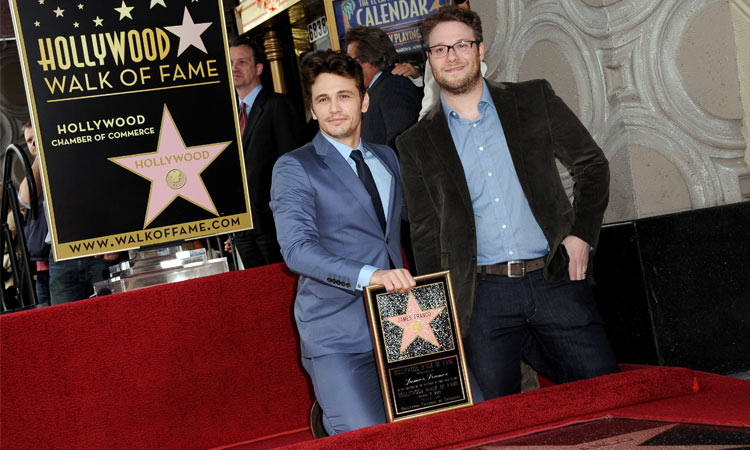 James Franco (left) and Rogen played journalists tasked with a difficult assignment by the CIA in 'The Interview' (2014). Photographer: Lionel Hahn/TNS.

For Rogen, he is well aware that he is, fairly or not, seen as an avatar for a certain type of bro’d-out slob comedy. He said his collaborators attempt to work against that whenever possible, for example in Fred Flarsky’s awakening to the concerns of people outside of himself.

“It really isn’t born out of some responsibility, but more our own creative responsibility to reflect our sensibilities,” Rogen said. “Which has always been a part of our creative pursuit — to make the work reflect what we feel and what we think, and not just comedically but morally. And it’s not … like this box we have to tick — if you want the work to represent how we feel, then this is the stuff it should be about.”

From ‘Knocked Up’ to ‘Pineapple Express’ to ‘Neighbors,’ giving his mainstream comedies the feeling of personal films has become a signature of Rogen’s work. And the star and his producing partners have successfully found a way to navigate the Hollywood system.

“We’ve done well with it and it doesn’t seem like they’re going to make us stop anytime soon. Knock on wood,” he said. “We could have been making more expensive movies a long time ago and we learned very early on that you just don’t want to be the studio’s biggest headache.

"As long as there’s a more expensive movie absorbing their focus, you will be allowed to do whatever you want, basically.” 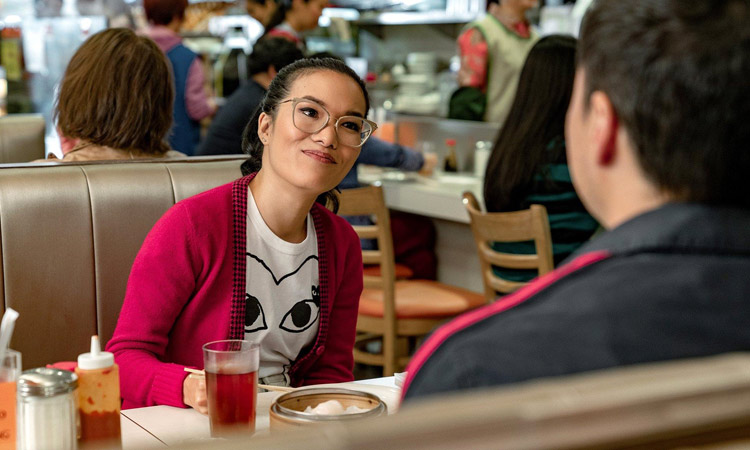