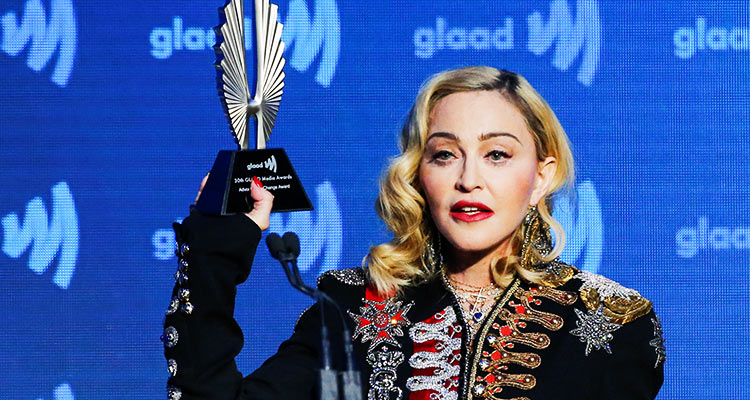 Singer Madonna holds up her award during the 30th annual GLAAD awards ceremony.

Popular singer Madonna was among the many artistes who were honoured at GLAAD Media Awards New York.

Following the Los Angeles ceremony in March, the 30th GLAAD Media Awards went to New York to continue honouring the celebrities, films, shows and media organisations that have made strides in supporting the LGBTQ+ community this past year.

Drag superstar Shangela hosted the event, which presented Madonna with the Advocate for Change award and host Andy Cohen with the Vito Russo award, reports variety.com.

She gave an emotional speech.

Singer Madonna is seen on the screen while speaking to guests.

Madonna speaks to guests after receiving the award.

"Growing up I always felt like an outsider, like I didn't fit in. It wasn't because I didn't shave under my armpits, I just didn't fit in," the 60-year-old said in her acceptance speech.

"He was my ballet teacher in high school and he was the first person that believed in me. That made me feel special as a dancer, as an artist and as a human being. I know this sounds trivial and superficial but he was the first man to tell me that I was beautiful.

"He took me to my first gay club in downtown Detroit. I told my dad I was having a sleepover at a girlfriend's house - that got me grounded for the rest of the summer."

Madonna also honoured her other close friends who died.

"After I lost my best friend and roommate Martin Burgoyne and then Keith Haring, happy birthday Keith, I decided to take up the bull horn and really fight back," Madonna said, reports people.com

Recently, the pop star performed the single "Medellin" from her upcoming 14th album "Madame X" with singer Maluma and five hologram-like avatars of herself at the Billboard Music Awards.