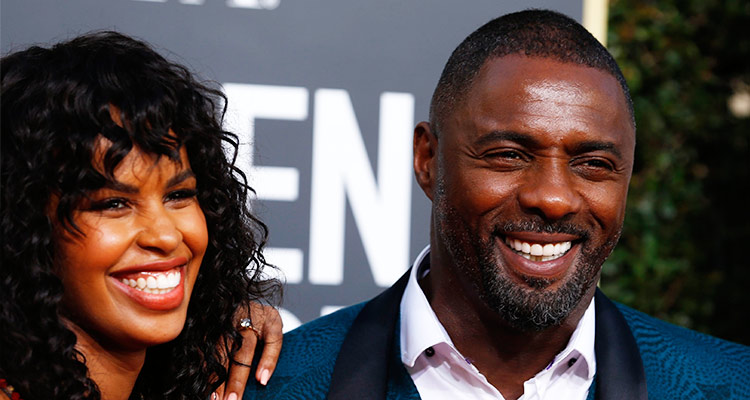 In images captured by British Vogue, the couple, who got engaged last year, looked smitten as they wed at the Ksar Char Bagh hotel in Marrakesh on Friday, reports dailymail.co.uk.

Dhowre opted for two exquisite dresses by Vera Wang for her big day -- a bardot style gown for the ceremony and a pearl embroidered number for the reception -- while Elba, 46, looked dapper in a bespoke suit by Ozwald Boateng.

An image from the fashion magazine shows Dhowre looking ravishing in her form-fitting A-line white gown, while her make-up is executed by Charlotte Tilbury and her hair by Luana Babbi.

In another, Elba cuts an incredibly dapper figure in his slick suit as he is seen gazing adoringly at Dhowre.

Another photograph shows the pair just after they exchanged their vows, as they passionately embrace while the former beauty queen flashes her dazzling ring.

"Congratulations to newlyweds Idris Elba and Sabrina Dhowre who exchanged vows in Morocco on April 26 2019. Celebrations were spread over three days in Marrakesh," the caption read.

With a 'colours of the Souk' themed dinner on Thursday night, and their extravagant nuptials on Friday, the three-day celebrations will culminate with an all-white party at a hotel.

In March, Dhowre took to her Instagram with fun-filled snaps from her wild Utah bachelorette bash.

In February last year, Elba, known for projects like "Legacy", "Thor", "Prometheus", "Mandela: Long Walk to Freedom" and "Luther", was seen getting down on a knee to pop the question to Dhowre.

Elba met Dhowre in her home country of Canada in 2017, and became acquainted on the set of the drama film "The Mountain Between Us".