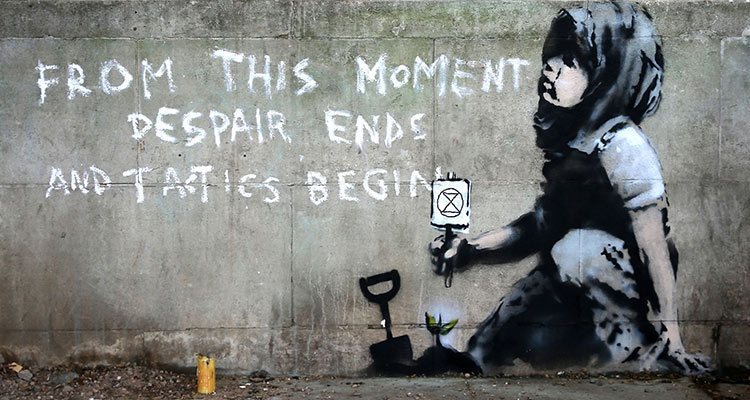 Graffiti artwork, suspected to have been created by the British street artist Banksy, is pictured.

A new work believed to be by British street artist Banksy appeared near London's Marble Arch on Friday, where climate change protesters have camped out for days.

The work features a child clasping a symbol of Extinction Rebellion, the group behind the protests, crouching next to a spade and a new plant.

"From this moment despair ends and tactics begin

"I think it's virtually a certainty it's him," auctioneer Andrew Tetley told London's Evening Standard newspaper.

"It hasn't been confirmed obviously that it is Banksy yet, but clearly there's a lot of excitement," added street art fan Lindsey Solomons, 53.

A passing tourist takes picture of a new piece of street art.

A man photographs a piece of graffiti.

A young boy points a camera he was playing with towards a new piece of street art.

Police officers walk past a graffiti believed to have been created by street artist Banksy.

"I think the message speaks for itself really, that if we don't do something about the planet clearly we're going to be in a desperate state, and he captures that so well," she told AFP.

Banksy, whose identity is known to only a handful of friends, caused a sensation in October when one of his paintings began shredding itself, just after selling for $1.4 million (1.2 million euros).

The artist has previously espoused themes such as immigration and refugees, the Palestinian cause and the yellow vest movement in France.