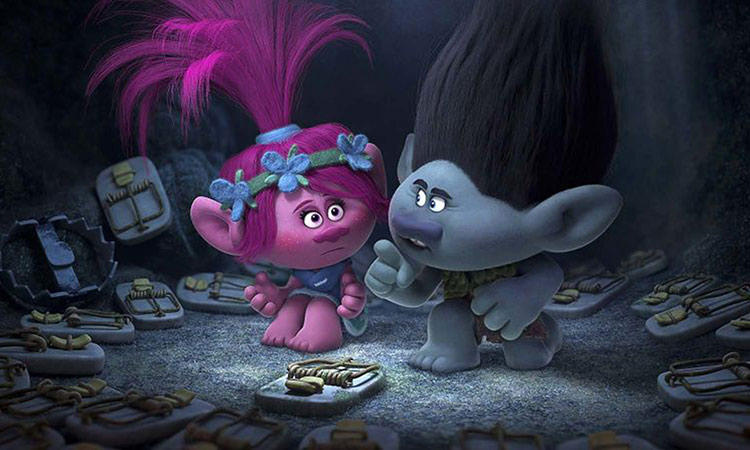 Poppy and Branch really can’t stop the feeling: The colourful Trolls are putting on yet another show with “Trolls Live!”

The hug- and glitter-loving creatures of DreamWorks’ smash “Trolls” are getting the live-action treatment with a stage show that will play 60-plus venues, DreamWorks, Universal Pictures and VStar Entertainment Group (part of Cirque du Soleil Entertainment Group) announced Tuesday.

The musical tour will begin in November and will hit 60 major cities in its first year. Locations and dates have not yet been announced.

So the performance-loving Poppy enlists her friends to save it by hosting “a toe-tapping, Trolls-tastic show” that’s heavy on their favourite things: singing, dancing, rainbows, glitter and hugs.

Members of the “Trolls Live!” fan club and those who sign up for Trolls Hair Mail can begin getting tickets on April 24; general sales begins on May 3.

The “Trolls” film starred the voices of Anna Kendrick, Justin Timberlake, Zooey Deschanel, James Corden and Christine Baranski, among others, and relaunched the beloved toy franchise in 2016.

The animated feature earned $346 million at the worldwide box office, as well as Oscar and Golden Globe nominations for Timberlake’s feel-good song, “Can’t Stop the Feeling.”

The pop hit, written by Timberlake, Max Martin and Shellback, also won a Grammy Award in 2017 for a song written for visual media.

“Trolls” also yielded a Netflix animated series, “Trolls: The Beat Goes On!”, and the characters will be featured in a sequel, “Trolls World Tour,” due in theatres in spring 2020.

Kelly Clarkson, Sam Rockwell and Chance the Rapper are among the new voices to be featured in the follow-up.

Tuesday’s announcement comes on the heels of a second extension for “DreamWorks Trolls:

The Experience,” a New York City-based attraction that brings the colourful characters to life, too. That event has been extended through Labour Day.