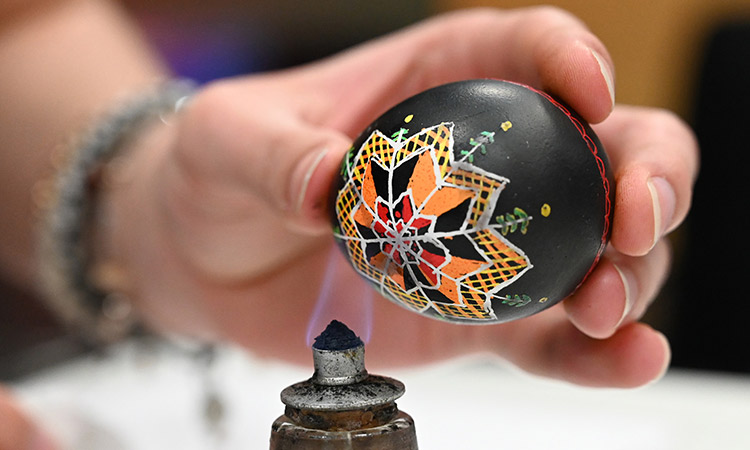 Elaina Marousek of Glen Arm, holding her decorated egg over a flame to melt the wax off. Amy Davis/TNS

Baylor wanted to tap into the artistic predilection of Kamyiah while “spending mom and daughter time” together.

“Good job,” Baylor said as she held up Kamyiah’s work for the day — a black egg adorned with multi-coloured religious symbols.

The 20 attendees at the morning session of “Pysanky: Ukrainian Egg Dyeing workshop” were able to impart their own flair to an ancient custom that has been practiced in Europe for more than 2,000 years.

Their teacher, Halyna Mudryj, a Baltimore-based Ukrainian artist, has been making the eggs for more than 50 years. The MICA graduate learned the art from her mother when she was 4.

“I’ll do it again because I love art and I like to make mistakes and turn it into something amazing.

“They (eggs) have a huge history,” explained Mudryj, who has been teaching the class at the Creative Alliance for the past 10 years. On a recent Sunday, she taught a morning and afternoon class. “And I’d like people to know this. And what better way than through art?”

“No two eggs are ever exactly alike,” she explained to the class. “Each egg has its own personality.”

“When you make an egg, try and copy the symbols so you can carry on the tradition,” she told the class.

Linda Scheetz took the class two years ago and enjoyed it so much that she returned this year to volunteer and assist Mudryj.

“Can’t you just visualize the bunnies hopping around these eggs?” she said to the workshop attendees. “It’s so much fun.”

Scheetz spent most of the session yelling encouragement to the egg makers. 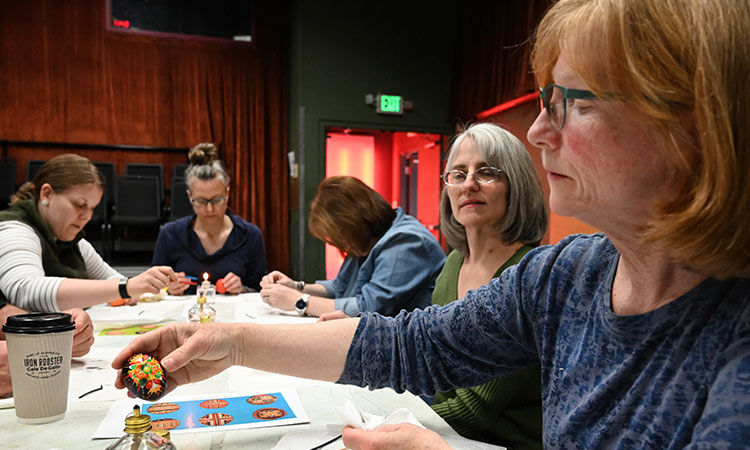 “That’s beautiful,” she said to Baylor.

“That’s great,” she added to Kamyiah.

The class appeared to have made an impact on its youngest participant: Kamyiah.

“I liked learning the background information about the egg,” she said.

Participant Linda Pelle most enjoyed finishing her work of art. Her egg was adorned with an orange bird that suspiciously resembled an Oriole, and a series of green and yellow flowers.

“I liked how the colours turned out,” the Parkville resident said.

Her husband, Chuck, created an orange egg peppered with birds, starbursts and other symbols. 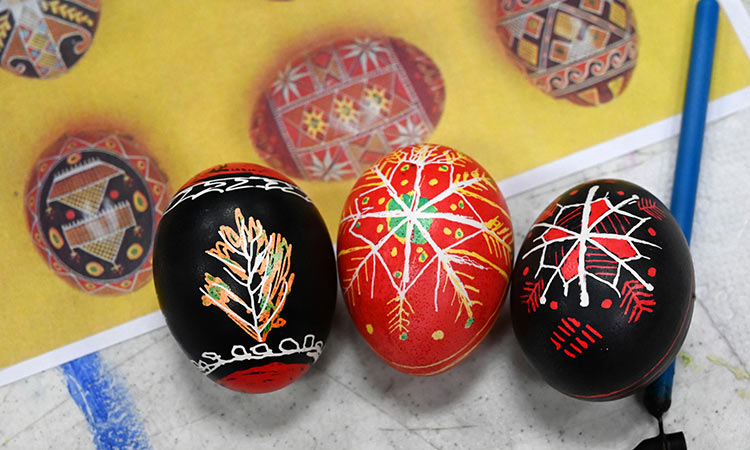 “It was the easiest thing to do,” he said. “I’d do it again because it’s easy and fun.”

What did Baylor think of her own creation?

“It’s hideous,” she said with a laugh. “I thought my egg was going to look like the pictures.”

Baylor cast her eyes at her creation — a multi-coloured patterned egg that was anchored by a black background.

Kamyiah said she was eager to make the eggs in the future.

“I’ll do it again because I love art and I like to make mistakes and turn it into something amazing.”