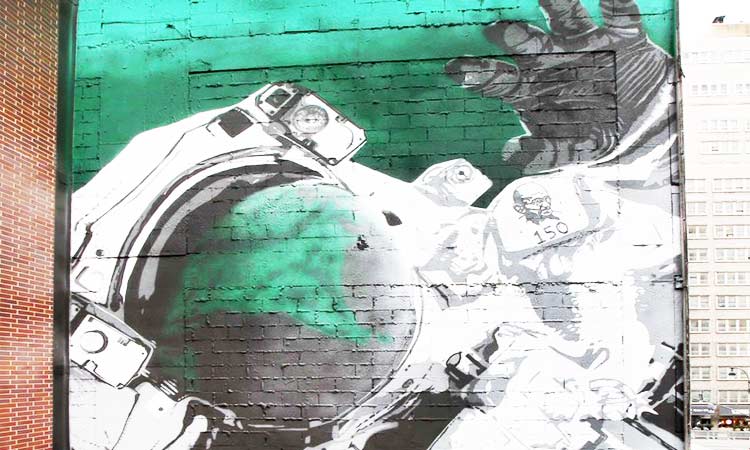 Sporting a Mahatma Gandhi patch on his shoulder, an astronaut floats in space on the mural painted.

Sporting a Mahatma Gandhi patch on his shoulder, an astronaut floats in space on the mural painted on the side wall of the Indian Mission to the UN that was inaugurated on Tuesday.

The mural that looks up from the vista that opens to the iconic glass-fronted UN building a block away commemorates the occasions.

The other themes on the mural, a joint effort of the ILO and the Indian mission, include the concept of "green", environmentally sustainable jobs and the greening of the world by planting trees.

India's Permanent Representative Syed Akbaruddin said at the inauguration that the mural addresses global concerns of decent jobs and the environment.

The painitng is being completed.

Picture of Mahatma Gandhi has been painted on the mural.

The other themes on the mural, a joint effort of the ILO and the Indian mission, include the concept of "green."

The mural looks up from the vista that opens to the iconic glass-fronted UN building.

He said the mural effort goes beyond the diplomatic work at the UN of dealing with resolutions to a new diplomatic area of reaching out to people to create broader awareness of issues.

Victor Ash, the artist who painted it while perched high on a cherry-picker, told IANS:

And to commemorate the anniversary of Gandhi' birth, he said he added Gandhi's image as a logo on the arm of the astronaut.

Ash said that one of his inspirations was India's record in 2017 of planting 66 million trees on a single day.

"I mixed different ideas and came up with this 'green astronaut' that is also worker - the worker from the future who would be working in space.

Share
Victor Ash, the artist who painted the mural

The mission building with a red-stone facade was designed by the internationally acclaimed Indian architect Charles Correa, but one of its sides was bared to the bricks after the neighbouring building was torn down and a hotel was built on the site with a deep setback.

The mural now decorates that side without impinging on the building's Correa design.

The mural was one of several sponsored across the city by ILO to commemorate its centenary with a project called Street Art for Mankind that aims to spread the message of decent work for all with sustainable development and social justice.

Portugal-born Ash said that he had painted a mural at the Indian Institute of Technology in Chennai during its Summerfest.

He said that he had started as a street-artist in Paris, where he had studied, and later went into doing paintings for galleries.

"But it was only the studio work and exhibiting in galleries was not reaching such a broad public," he said.

"So I went back to the street and did murals because it has a much bigger impact and you can actually transmit messages much better than just exhibiting in galleries for a few specific people." 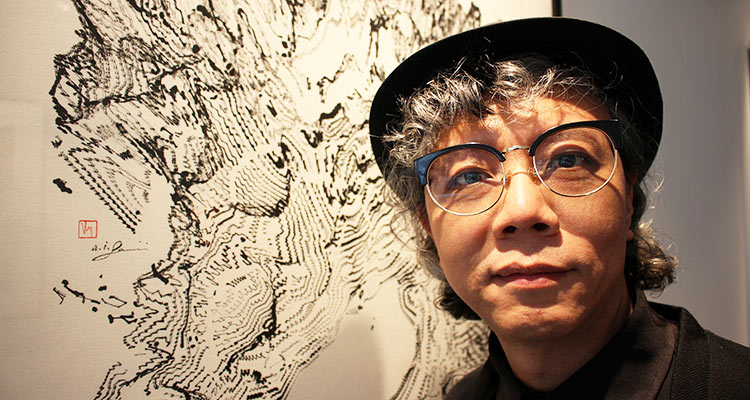