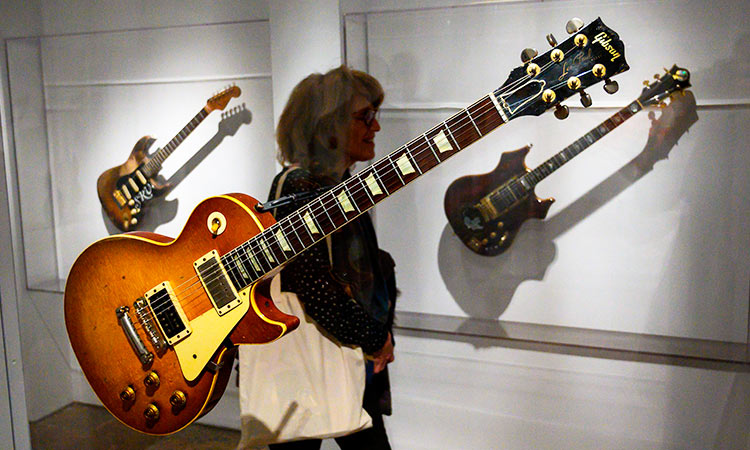 "Number One" belonging to Jimmy Page is displayed during a media preview for an exhibit called "Play It Loud.

NEW YORK: The art of rock and roll is getting its due at an upcoming show at New York's Met museum, which is decking its halls with instruments from the genre's greats.

The exhibit put on in partnership with the Cleveland-based Rock & Roll Hall of Fame celebrates "tools of innovation and outstanding artistic innovation," Max Hollein, the Metropolitan Museum's director, told journalists at a preview. 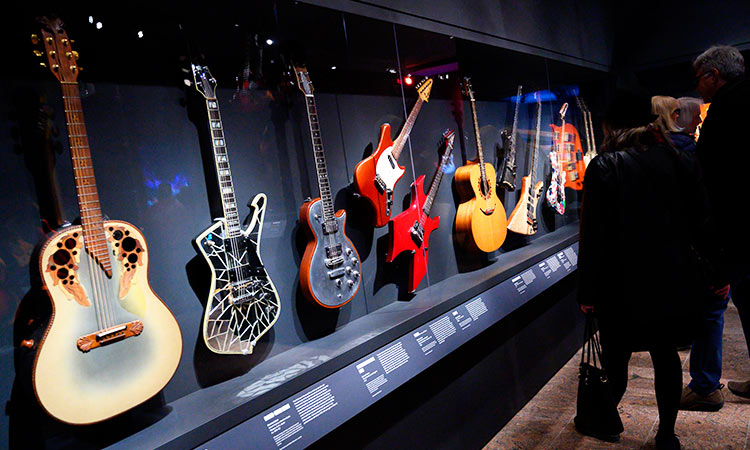 The art of rock and roll is getting its due at an upcoming show at New York's Met museum.

The more than 130 instruments from 1939-2017 in the show are organized to depict how musicians used and advanced emerging technologies throughout the 20th century to create new sounds and styles.

In addition to instruments, the Met is displaying flamboyant costumes of rockers along with show memorabilia like gig posters and even the remnants of smashed guitars.

"Instruments are some of the most personal objects connected to musicians, but as audience members we are primarily used to seeing them from far away, up on a stage in performance." said Jayson Kerr Dobney, the show's curator.

"This exhibition will provide a rare opportunity to examine some of rock and roll's most iconic objects up close.

Steve Miller -- whose Steve Miller Band is known for such hits as "The Joker" and "Fly Like An Eagle" -- told journalists that "he was stunned by the power and the elegance and the intelligence" of the show, which he loaned several guitars to.

He praised curators for their work to "cut through years of nonsense designed to trivialize these instruments."

Led Zeppelin's Jimmy Page, whose iconic "Stairway to Heaven" guitar is on display, voiced awe at making it into the Met, which he dubbed "the holy grail."

"For me to be here... I never would've even dreamt about it, even as a kid," Page said. "I was really keen to be able to loan whatever I could to make it come alive."

The show came under some criticism when it was announced, because the initial teaser before the full list of more than 80 artists was released spotlighted just one woman, Grammy-winning contemporary rocker St. Vincent. 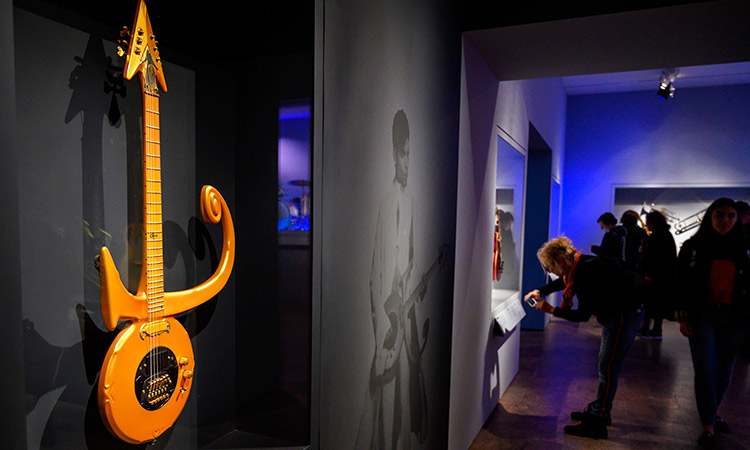 In this file photo a guitar owned by Prince called "Love Symbol" is displayed.

But the show was ultimately more inclusive than it first appeared, and Dobney addressed the gender issue in the show's catalog: "Rock and roll was for many years a boys' club," he writes with Hall of Fame curator Craig Inciardi.

"In the 1950s and 1960s, and even beyond, the women in rock and roll bands, were primarily limited to vocals, the reason they were under-represented in these pages."

Along with Jett and Mitchell a number of female performers are represented including Patti Smith and Lady Gaga, whose enormous futuristic piano is featured in the exhibit to run from April 8 until October 1.

At the show's preview Don Felder of The Eagles played the intricate solo from the band's hit "Hotel California." He said that after arriving in New York as a 20-something, "the very first thing I did the following day is I came to the Met."

"It's such an incredible honor that 50 years later, this guitar would be hanging" here, Felder said of his double-neck Arctic White instrument.