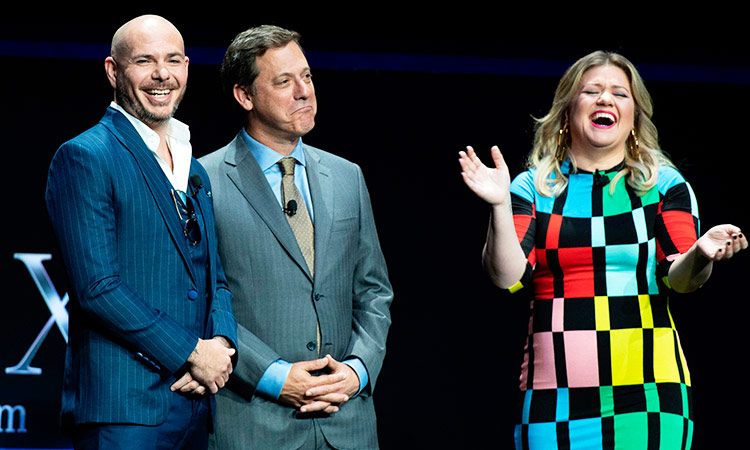 LAS VEGAS: Blockbusters are a clear favorite among the audience of theater owners and distributors at the CinemaCon trade convention for a simple reason: They're the ones that make the most money.

But this year, the show kicked off Tuesday morning with a presentation from a different type of studio: STX Films, which proudly touts a slate of mid-budget, star-driven tent pole alternatives to fill what they see as a gap in theaters.

One star who made the trip out to Las Vegas was "Black Panther" star Chadwick Boseman, who, in addition to being in what is going to be perhaps the biggest film of the year, "Avengers: Endgame," is also starring in STX's "21 Bridges," a crime thriller about an NYPD detective looking for a second chance. It hits theaters July 12.

"I could tell it was going to be a ride," Boseman said. "And at the same time it took me back to my theater days where you have the faced-paced language, like David Mamet, that New York feel."

Boseman also produced the film and was excited to see a project, "from beginning to end."

Katie Holmes, a cast member in "Brahms: The Boy II," discusses the film during the STSXfilms presentation at CinemaCon 2019.

Dave Bautista, a cast member in the upcoming film "My Spy," appears onstage .

Talent involvement at all levels of production was a recurring theme at the STX presentation, where Boseman's Marvel-brother Dave Bautista also appeared to promote the family-comedy "My Spy," with newcomer Chloe Coleman. Bautista stars in and also produced the film.

STX Chairman Adam Fogelson said his studio provides a home for "stars and storytellers" who come back time and time again to work with them, like Jennifer Lopez and Kevin Hart, and make films for "audiences not served by tent poles."

Fogelson also noted that 18% of STX's films have been have been directed by women, and 64% feature actresses in the leading role. Although far from 50% for female directors, it's also notably better than the industry-wide track record, which hovers closer to 4% for the top films.

The STX slate no doubt has range: They have a horror, with a sequel to "The Boy," starring Katie Holmes, a retiree cheerleading comedy "Poms," starring Diane Keaton, an action-comedy in Guy Ritchie's "The Gentleman," with Matthew McConaughey and Colin Farrell, and a classic literary adaption with "The Secret Garden," to name a few.

"We teach in our household that unique is just as cool and sometimes even more cool.

The studio also brought out Holmes, Keaton and Charlie Hunnam and Henry Golding of "The Gentleman" to talk about their films, as well as Kelly Clarkson and Pitbull, who voice roles in "Uglydolls," the studio's first foray into animation that will be out May 3.

Clarkson said she grew up dreaming about being a princess but when the "Uglydolls" project came her way, she thought, "This is totally more me. This is more my personality."

She also performed an original song from the film, "Broken & Beautiful."

It's not a dissimilar message to STX's own mission, which is to be an antidote to a superhero dominated film.