Picasso in I.Coast? A village tells of its brush with the artist - GulfToday

Picasso in I.Coast? A village tells of its brush with the artist 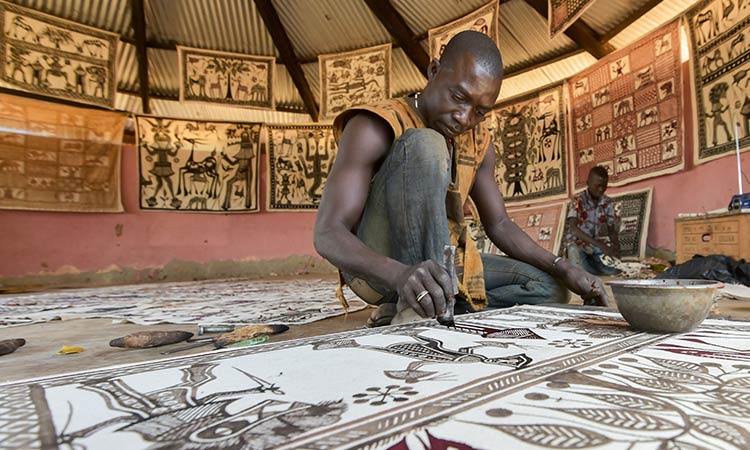 An artist paints on a cotton fabric, in the village of Fakaha. Photograph: Sia Kambou/AFP

ABIDJAN: "I'm sure! I tell you, he came. I saw him!" insists Soro Navaghi, keen to extinguish any doubts about Picasso's visit to a small Ivorian village famed for its painted textiles.

Whether in tourist brochures or online, it is not unusual to find references to Picasso's reputed visit to Fakaha, a remote village in northern Ivory Coast, some 650 kilometres (400 miles) from Abidjan, the economic capital.

French travel guide Petit Fute describes Fakaha as "internationally renowned" for its hand-spun cotton cloth which is painted by the Senufo people and that once "charmed a certain Picasso as he paid a discreet visit to the region at the turn of the century."

A whole mythology has grown up around the question of Africa and Picasso, who never spoke of having been to Fakaha.

Highlighting the resemblance between African sculpture and some of Picasso's work, many art critics see the symbolism and imagery of Africa as one of his sources of inspiration.

"Picasso used everything that came through his door and integrated it into the constant evolution of his artistic process.

One often-cited example is the striking similarity between an African Grebo mask and one of the faces in his 1907 work "Les Demoiselles d'Avignon".

"Whenever someone emphasised the influence of African art on the development of his own work, he would shrug his shoulders, annoyed at being reduced to that: although it is certain he was influenced by it from 1906 when he experienced his first (African) sculptures," says Gilles Plazy, one of his biographers.

"Picasso used everything that came through his door and integrated it into the constant evolution of his artistic process," he said.

"He opened up new paths."

Out of the bush, barefoot

For the several hundred residents of Fakaha, there is no question about where the celebrated Andalusian artist and sculptor found his inspiration, after stumbling upon their village some 15 km from the main road to Korhogo.

An artist shows a painting assumed to be made by Spanish artist Pablo Picasso. Photograph: Sia Kambou/AFP

An artist paints on a cotton fabrics in his workshop. Photograph: Sia Kambou/AFP

An artist paints on a cotton fabric in his workshop, in the village of Fakaha. Photograph: Sia Kambou/AFP

Their dexterity is fascinating, their moves precise. Working with knives or sticks, they plunge their tools into the bowls of colour, quickly transforming the white cotton into a work of art covered with animal motifs and figures in masks.

And there is an element of Picasso in it, with a definite similarity between his works and those of the artists of Fakaha.

"I tell you, he came here. He was inspired by us," repeats Soro Navaghi, aged in his 60s.

The artist stayed there for several days and even gave the villagers some advice, they say.

"It was him who taught us to use sponges and toothbrushes to be quicker and more precise," says Silue Naganki, one of the artists who takes his inspiration from long-dead ancestors.

"Before him, we never used the frames either. It was him who advised us to paint the frames."

Ducking into his house, Soro Navaghi comes up with the "ultimate proof" — a cotton canvas featuring Picasso himself.

A self-portrait by the master! Surely there can be no doubt, even for an amateur, that this is Picasso, proclaims Navaghi.

"It was him who taught us to use sponges and toothbrushes to be quicker and more precise.

Attached to the canvas is a self-declared certificate of authenticity signed by a travel agent who attests to having witnessed the visit.

"Picasso came barefoot to Fakaha in 1968. He worked shirtless and without clothes," says the document, a copy of the original which is kept in the village archives for safekeeping.

End of his life

Picasso died in 1973 at the age of 91, and other villagers concede that his visit was probably earlier than 1968 given his age by then.

At that time, the world-renowned painter, in his mid-80s, would have walked 15 km through the bush, chancing upon a village with no electricity or running water and staying there several days. 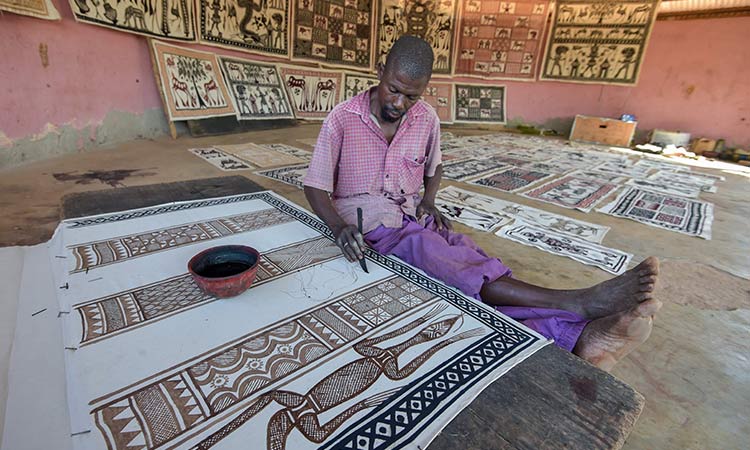 And all this passing under the radar...

Even though Picasso continued working until his death, it certainly wasn't only at the end of his life that African influences appear in his works.

But could he have been in Fakaha around the turn of the century, as travel guide Petit Fute suggests?

If there is no trace of Picasso's visit, it is because he wanted it to be kept secret and not give away the fact that he had been inspired by Fakaha, a young villager says.

If he did make the journey, Picasso would have had to take a boat to Abidjan, then travel the remaining 1,000 km by road in scorching, dry conditions with little shade from the sun — an adventure more suited to an explorer.

Such an epic trip would have taken at least several months, and would likely have featured in one of his biographies.

Even so, the story retains an element of mysterious intrigue.

In a bid to seek expert input, AFP contacted the Picasso Museum in Paris, which declined to comment, then spoke with several of his biographers, who also refused to be pinned down.