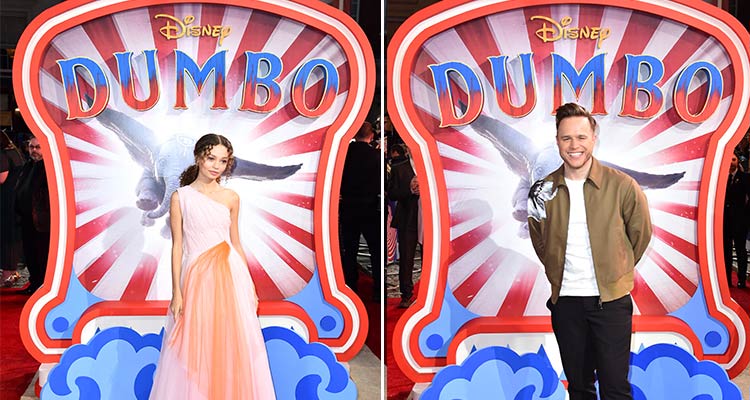 Seventy-eight years after the original “Dumbo” hit theaters, Walt Disney Co. is ready to soar to the top of the box office charts this weekend on a pair of oversized elephant ears.

The Burbank studio’s latest live-action remake is expected to open with $50 million to $58 million in ticket sales from the U.S. and Canada from Thursday night through Sunday, according to people who have seen pre-release audience surveys.

That means director Tim Burton’s modern take on “Dumbo” will probably unseat Jordan Peele’s horror hit “Us” as the No. 1 domestic film.

“Dumbo” should be the latest film to give the box office a lift after a rocky start to the year.

Hits including “Us” and “Captain Marvel” have helped boost sales after a lackluster start.

“Dumbo” represents another test of Disney’s strategy of reviving its animated classics as big-budget cinematic epics, an effort that has resulted in successes including “Beauty and the Beast” ($1.3 billion in worldwide sales) and “The Jungle Book” ($966 million).

While analysts do not expect “Dumbo” to reach those heights, projections suggest the film will enjoy a solid opening with family audiences.

It’s the first of multiple live-action re-imaginings on Disney’s 2019 schedule, which also promises new versions of “Aladdin,” “The Lion King” and a “Maleficent” sequel.

Reviews for “Dumbo” have been lukewarm, indicated by a Rotten Tomatoes score of about 50 percent as of Tuesday. Burton, known for bringing cinematic misfits such as “Edward Scissorhands” and “Beetlejuice” to the big screen, previously remade “Alice in Wonderland” into a successful live-action blockbuster for Disney in 2010 (the 2016 sequel flopped).

The new “Dumbo” is nearly twice as long as the 1941 original, with an expanded story about a struggling circus owner (Danny DeVito) who enlists a former performer (Colin Farrell) and his kids to care for the oddball pachyderm.

The movie also features Michael Keaton as an ambitious entertainment entrepreneur, as well as a new version of the Oscar-nominated song “Baby Mine” by the Canadian indie rock band Arcade Fire.

“Us,” about a family besieged by doppelgangers while on vacation, is expected to gross about $35 million in its second weekend, probably putting it in second place. That would be a roughly 50 percent decline from its opening.

Meanwhile, Marvel Studios’ “Captain Marvel,” starring Brie Larson, appears to be headed toward the $1-billion box office milestone. The superhero film has collected $912 million so far, including $321 million in the U.S. and Canada and $591 million overseas.

The big films face virtually no competition this weekend.