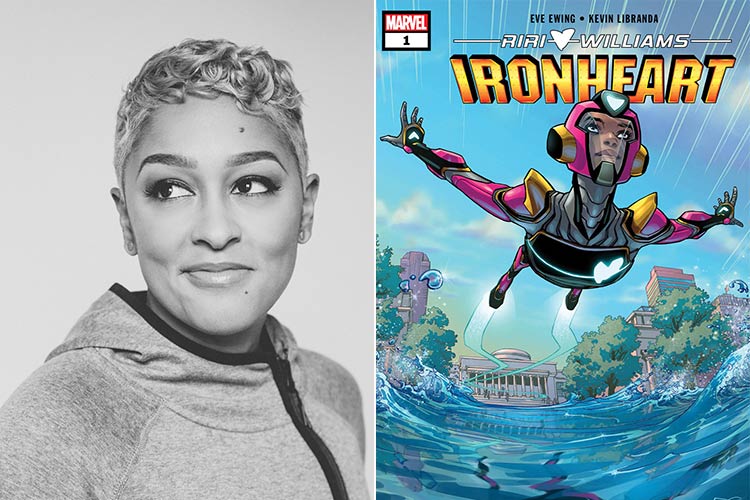 Eve Ewing is the writer of the Ironheart comic series. TNS

It’s only been a couple of months since Eve Ewing’s writing prowess graced the cover of her first Marvel series, Ironheart. And the masses are picking up what she’s putting down. And part of the fun of watching Ewing do her thing is she’s just as gobsmacked as fans are when the finished products hit newsstands.

So imagine the giddiness on the local comic landscape when “Wikipedia Brown” (Ewing's Twitter handle) shared the news that she got to work on Ms. Marvel 38, to be released on Feb. 13. Now, another gift for comic fans: Ewing will be kicking off the first arc of a Marvel Team-Up — a classic series that ran through the 70s and 80s.

“It’s been wonderful to watch Eve grow as a comic’s writer, with each one of her ‘Ironheart’ scripts being better than the next,” said C.B. Cebulski, editor in chief of Marvel. “With her ability to not only capture the feel of the Marvel universe, but to make her characters move so naturally through it with their actions and dialogue, we knew it was only a matter of time before she was writing more for us. With Marvel Team-Up, Eve will be able to play with different characters and lend her voice to our heroes’ relationships, both old and new.” We talked to Ewing before this news broke, to talk life post-Riri Williams (aka Ironheart) and pre-C2E2. The interview has been condensed and edited.

Tell us more about Ms. Marvel and Spider-Man.

I don’t want to reveal too much, but my goal with the story is to have maximum fun with two characters that are both really sweet and really cool people who are fan favourites (and faves of mine), and to put them both in some delightful awkward and uncomfortable situations where they have to stretch to the limits of their abilities. (Pun intended.)

Did Marvel reach out with the idea or was this something that you posed to the team?

My editors at Marvel reached out with this idea and once I heard the characters involved, I couldn't resist.

“Ironheart” love is strong, but that was a reimagining of a character. This new endeavor is more of getting the baton passed to you. How does that translate for you as a writer/creator?

It’s a different challenge. In some ways Ms. Marvel is similar to Ironheart in that she’s a newer character and I have had the chance to go back and get to know her from the very beginning, whereas I couldn’t in my lifetime read every take on Spider-Man. But it feels like such an honour to be able to write a story for one of the most iconic characters ever created in pretty much the history of modern pop culture.

How did you feel after “Ironheart’s” reception by Marvel fans?

Continually inspired. Every single picture or story someone sends me about their mom or daughter or student or dad loving the story makes my heart swell. We’ve gotten equal parts love from people saying, “I’ve loved comics my whole life and this character is a breath of fresh air” to people saying this is their very first comic book, and both of those make me so happy. I spent most of this fall traveling around the country with (her previous book) “Ghosts in the Schoolyard” talking about school closures, and people often write me letters or come up to me at readings and tell me that that book made them cry, or it made them really angry.

I think it’s important to have that entire range of emotions. I think we need to get angry about the things that are terrible and unjust, and be saddened and moved to action, and I also think that we need space for play and for imagination. I’m glad I get to make people feel all those feelings.

How long before we see “Ironheart” hit the big screen?

I don’t know anything about anything! And if I did I couldn’t tell you! But I do think that Ironheart would be a star, of course. On her own or with a team. Only time will tell.

What will you be talking about at C2E2 in March?

Whatever the good people show up and ask me about! Just looking forward to having fun at our hometown con and hopefully meeting Donald Faison, Paul Rudd and Alicia Silverstone. I’m a big “Clueless” fan.