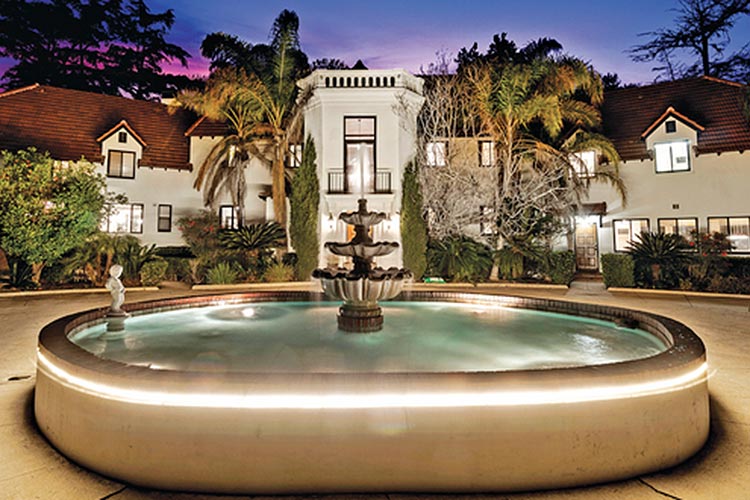 Pyrenees Castle, the longtime Alhambra, California, home of disgraced songwriter Phil Spector, is on the market for the first time in two decades for $5.5 million.

LOS ANGELES: High on an Alhambra hilltop, the French chateau-style mansion owned by Phil Spector — and where actress Lana Clarkson was slain — is for sale at $5.5 million.

Called the Pyrenees Castle, the eerie estate dates to 1926, when French immigrant Sylvester Dupuy erected the home to mimic the castles he saw as a child in his native country. The house was divided into apartments in the 1940s before a Chinese investor bought it and remodeled in the ‘80s.

Spector, an influential producer famous for his “wall of sound” recording technique, paid $1.1 million for the home in 1998, describing it to Esquire as “a beautiful and enchanting castle in a hick town where there is no place to go that you shouldn’t go.”

Dogged by a history of substance addiction and domestic abuse, Spector was occasionally seen by neighbors winding his way up to the estate in a luxury car. They compared him to a feudal lord among serfs.

Looming over the San Gabriel Valley city, the walled and gated mansion sits on a knoll of more than 2.5 acres.

Past a quarter-mile driveway and motor court, the 8,700 square feet of interiors open to a grand marble foyer — the room where Clarkson was found shot to death in 2003 after a night out in Hollywood.

Spector was arrested on suspicion of murder soon after, and following a mistrial in 2007, he was retried and convicted of second-degree murder two years later. He’s serving a prison sentence of 19 years to life.

Crystal chandeliers and hand-painted murals draw the eye throughout the mansion, which has nine bedrooms and 10 bathrooms. There’s also a paneled living room, two kitchens, two offices and a hair salon.

Outside, turrets give the exterior its castle-like vibe, and a top-level terrace takes in city light views. A fountain and four garages complete the grounds.

Spector, 79, produced award-winning work with iconic groups such as the Ronettes, the Beatles and the Ramones during his career. His writing credits include “Be My Baby” and “Then He Kissed Me.”

The real estate apple doesn’t fall too far from the tree when it comes to the Kardashian-Jenner family.

The west-facing lot is a half-mile down the street from a modern 11,000-square-foot home that sold last year to a trust tied to Jenner’s mother, Kris Jenner.

The parcel measures just under an acre and takes in mountain and golf course views.

Plans for a 15,000-square-foot single-story home “by a known Beverly Hills developer” were also included in the deal, according to a listing for the property.

Although the description doesn’t name the developer, property records offer some clues.

The seller was a trust tied to Los Angeles-based developer Gala Asher, who three years ago sold a Holmby Hills showplace to billionaire Tom Gores for a then-record $100 million.

The sale continues a recent eastward expansion for the Kardashian-Jenner clan, whose holdings mostly lie in Calabasas and gated Hidden Hills. Kylie Jenner herself has owned multiple properties in the latter community. Last year, she and her partner, rapper Travis Scott, bought a home in the Beverly Hills Post Office area for $13.45 million.

Jenner, 21, is largely known for her family’s reality series, “Keeping Up With the Kardashians,” which follows the lives of her siblings, in-laws and parents.

Four years ago, she launched her makeup company, Kylie Cosmetics, which is reportedly valued at $800 million.

Actor Ricky Schroder of “NYPD Blue” and “Silver Spoons” fame has sold his longtime ranch in Topanga for $9.3 million.

A Spanish-style main house and a guesthouse share the site with organic gardens, orchards and trails. Zoned for horses, the property also has a barn and a riding ring.

The main house has four bedrooms, beamed ceilings, custom built-ins and French doors that open to a multitude of outdoor living spaces.

An expanded bathroom — complete with custom wardrobes and a marble wall — highlights the master suite.

Schroder and his wife, Andrea Schroder, seeking adequate space for both kids and critters, acquired the ranch in 2005 after returning to the LA area from Colorado. The couple is in the process of divorcing.

The property was not publicly listed for sale and sold outside the Multiple Listing Service.

Ricky Schroder, 48, got his start in show business at an early age, appearing with Jon Voight in the 1979 film remake “The Champ” and in the 1980s on the sitcom “Silver Spoons.”

His other notable credits include the miniseries “Lonesome Dove” and the shows “Strong Medicine” and “24.”

It appears Lucy Hale’s story will continue in Studio City.

The actress of “Pretty Little Liars” fame has bought a Spanish-style home in the San Fernando Valley neighborhood through a trust for $2.95 million, records show. Last week, she listed another house in the area for $2.498 million.

Set at the end of a gated and winding drive, the two-story home has been extensively renovated and features walnut wood floors, high ceilings and decorative tile work. French doors in the chef’s kitchen and dining room lead outdoors to a tiled patio with a brick fireplace.

The house, built in the 1940s, sits on about an acre of grounds and has a saltwater swimming pool. Views take in the surrounding hills and canyon area.

Hale, 29, appeared on “Bionic Woman” and “Privileged” before landing her most widely known role as Aria Montgomery on “Pretty Little Liars.” She is set to star in the upcoming romantic comedy “A Nice Girl Like You.”

Retired basketball player Ron Harper, who won three NBA titles with the Chicago Bulls and two with the L.A. Lakers, has unloaded his New Jersey home for $1.485 million.

The Bergen County abode appears to have been a nice investment. The former point guard bought the home in 2011 for $875,000 and remodeled it soon after.

About 30 miles from New York City, the two-story home opens through double doors to 5,100 square feet of hardwood-lined living spaces. The living room and sunken dining room share a dual-sided fireplace, and the kitchen has custom cabinetry and a tiered quartz island. Other main-level highlights include an office accessed by sliding barn doors and a covered deck off the living room.

Upstairs, the master suite offers dual closets and a Juliet balcony. There are four bedrooms and 5.5 bathrooms in all.

Tall trees create privacy on the one-acre grounds, which have a swimming pool, a patio and yard out back.

Harper, 55, was drafted by the Cleveland Cavaliers in the first round of the 1986 NBA draft and went on to play stints with the L.A. Clippers, Bulls and Lakers. During 15 seasons, he averaged 13.8 points and 3.9 assists per game as a guard.