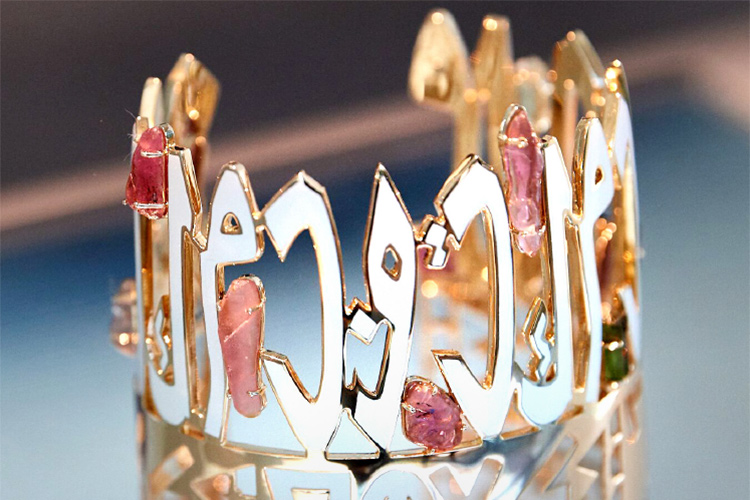 Warehouse421, Abu Dhabi’s creative hub for regional artists, opens its landmark exhibition, Nomadic Traces: Journeys of Arabian Scripts, in collaboration with Khatt Foundation on 16 March. The commissioned exhibition, curated by Dr. Huda Smitshuijzen AbiFarès, showcases six of the region’s scripts that have influenced the Middle East we know today including culture and communities. The exhibition features nine newly-commissioned works by artists from across the GCC and the Levant, and will highlight themes that speak to both the UAE and the Middle East more widely. “Nomadic Traces: Journeys of Arabian Scripts” will run from 16 March to 28 July at Warehouse421, Mina Zayed, Abu Dhabi.”
Artists and works being exhibited include:

YAD — Margherita Abi Hanna:
Yad draws on the Phoenician script, the world’s oldest recognized language, which inspires Abi-Hanna’s work as a Lebanese artist looking back to the ancient civilization that once called Lebanon her home. Yad, both the Phoenician and Arabic word for ‘hand’, embodies Phoenician text with five distinctive rings, made for each finger. Capitalizing on the abstract, simple geometry of the Phoenician script, Abi-Hanna created a twisted interpretation of the letter into a complex architectural form.

The Sun Never Sets on the Empire — Sarah Alagroobi:
Sarah Alagroobi, the Emirati cross-disciplinary visual artist, explores geopolitical notions of both sovereignty and cultural agency through re-interpreting a phrase used by Western imperialists, ‘the sun never sets on the empire’, phonetically into Phoenician text. Sculpting the phrase into bright, neon lights, the piece subjects the audience to the experience of exposure to blinding light in constrictive space, speaking to the Eurocentric approach to cultural exploitation.

From the Ashes and Into the Fire — Xeina AlMalki:
This work draws its inspirations from funerary reliefs of the ancient Palmyrene civilization. AlMalki, a Syrian national, was drawn to the Palmyrene script following the destruction of Palmyra in 2015. From the Ashes and Into the Fire recreates Palymrene text in three-dimensional clay sculpture, which were formed by hand, instead of using a mould, looking to explore the limitations of the clay and discover how the material can lend itself to larger designs. These sculptures come together to create a three-dimension memento mori of a civilisation turned to ash.

And We Adorned the Nearest Heaven With Lamps — Nasser Al Salem:
Nasser Al Salem draws on the Mashq script from Hijaz as his inspiration for his spatial installation. The ancient Arabic script was dotless, used around 700 CE. Dots emerged into Arabic for non-native speakers as reading guides that helped to differentiate letters which shared the same base letter shape, and Al Salem uses the dot to guide the viewer through his piece. Al Salem, who is known for philosophical allusion within his work, uses the dot, the line and the circle as an allegory for the metaphysical schema we collectively inhabit, and how modern life breaks from connecting with that which lies above us.

Typographic Souvenirs of Arabia — Rasha Dakkak:
This installation uses six separate scripts: three living scripts and their corresponding ancestral scripts: Arabic, Latin and Hebrew, and Nabatean, Phoenician and Aramaic. Rasha Dakkak, a Palestinian designer, seeks with this installation to remind that the languages spoken by billions across the world originate from one common ancient tongue from the Arab East. Dakkak, through creating a cross-sectional letterform from an ancient script through to its living equivalent, has created souvenirs of this ancient Arab language with objects that trigger conversations on origin and on provenance.

Maktoob — Nadine Kanso:
‘Maktoob’, meaning ‘written’, has a variety of meanings in Arabic: to be physically written, to be written for posterity, to be a proof of authenticity or to be predestined. Maktoob, which draws on the geometrical Musnad script, builds into Kanso’s portfolio of jewelry design, and seeks to ask what it truly means to be ‘written’ when possessing an Arab identity. To be an ‘Arab’ is to both belong to an ancient people and to be part of a major global community, and so in this piece, Kanso combines the ancient script of Musnad with the later script of Arabic, providing a fresh forum for contemporary design on identity.

Silk Rogue Kimabaya — Milia Maroun:
In Silk Rogue Kimabaya, fashion designer Millia Maroun combines the ancient script of Phonecian from West Asia with the modern Japanese script of Katakan from East Asia. Through the unification of the two scripts, through horizontal and vertical patterns, Maroun seeks to highlight the fluidity of the act of writing itself, creating an open map of uncharted roads that allude both to a passage across the continent and a passage through time from the age of gold and silk to the modern day. Maroun brings these elements together in a nomadic hybrid of culture: the kimono and the abaya, or the Kimabaya.

If Speech Is Silver — Khalid Mezaina:
The collection of garments used for If Speech Is Silver are a textile wrap, a talismanic shirt and a sarong, which use the metal of silver as their starting inspiration. Mezaina sought to reinterpret mystic, ancient beliefs regarding the use of silver and of talismanic devices toward the modern day, and to do so he uses two scripts, Musnad and Aramaic, and applies them in the form of textile prints, assigning the letters mystical and protective powers. Through using textiles, he views scripts as passing beyond linguistic forms of communication that cross borders and, in this sense, become nomadic.