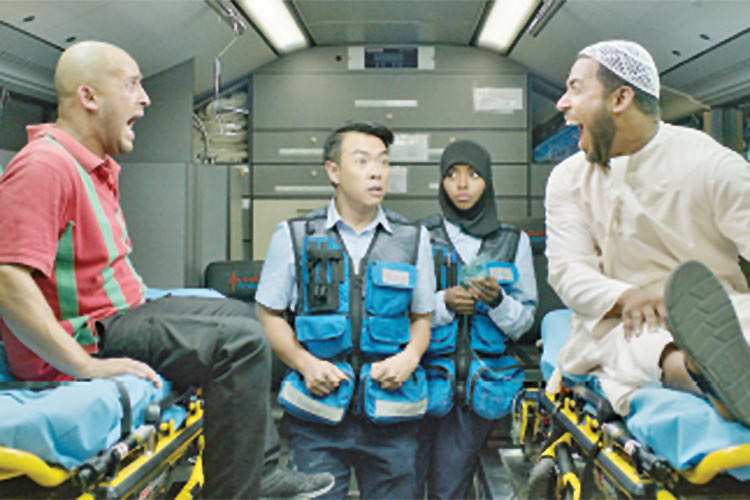 A still from the film.

ABU DHABI: Image Nation Abu Dhabi, the Academy Award winning media and entertainment company in the Middle East, will release its upcoming Emirati feature comedy RASHID & RAJAB in cinemas across the region on Eid Al Fitr (June 2019) and have released a first look at the film. Shot on location in Dubai, the UAE production is the first live-action feature film from Emirati director Mohammed Saeed Harib, best known as the creator of the iconic animated TV series FREEJ. The film was produced by Emirati filmmakers Ali Mostafa (THE WORTHY, FROM A TO B) and Majid Alansari (ZINZANA), alongside Breakout Film’s Rami Yasin (SHABAB SHEYAB).

The family-friendly comedy follows wealthy Emirati executive “Rashid” (Marwan Abdullah Saleh) and carefree Egyptian fast-food deliveryman “Rajab” (Shadi Alfons), who switch bodies after a freak accident on their way to work. As they desperately look for a way to revert to their former selves, the unlikely pair gain a different perspective into each other’s lives. Emirati actor Marwan Abdullah Saleh makes his feature film acting debut after being named as one of Screen International magazine’s “Arab Stars of Tomorrow,” while his co-star is played by Egyptian comedian actor and star of SATURDAY NIGHT LIVE ARABIA, Shadi Alfons. Dubai TV presenter Sheema makes the leap from television to the silver screen as Rashid’s wife “Leila.”

Rounding out the cast of well-known regional acting talent and personalities are Egyptian actress Doaa Ragab, Emirati actress Haifaa Rashed, Saudi-Korean comedian Wonho Chung, Oman’s Samira Al Wahibi and Lebanese screen legend Fadi Ibrahim. Ahead of the body-switch comedy’s official teaser launch, Mohammed Saeed Harib commented: “I hope that audiences find the film as much fun to watch as it was for us to make. Our incredible cast of talented actors are seen in unexpected performances that will surprise and delight audiences.” Harib continued: “Rashid and Rajab allows you to see the world through someone else’s eyes, but when it comes to wanting to be someone else, be careful what you wish for.”

The release of its upcoming film follows a stellar few months for Image Nation, having seen its third local production (Legal drama JUSTICE) picked up by global streaming platform Netflix, and an Academy Award win for Best Documentary for its international co-production FREE SOLO. RASHID & RAJAB marks its seventh local feature film to be released.

“Through our unique slate of projects, Image Nation offers an authentic perspective of the UAE to the rest of the world - telling the nation’s stories and representing its diverse culture – and Rashid & Rajab is a shining example of this.” Says Hana Kazim, Manager of Local Film & Television at Image Nation Abu Dhabi.   “We always aim to foster and grow local talent and offer unique platforms for Emirati filmmakers to tell their stories. Seeing Harib’s remarkable creative abilities translate to the big screen has been inspiring and we can’t wait for audiences to see this hysterical film.”  Image Nation Abu Dhabi is the studio behind RASHID & RAJAB, and the film is produced by Rami Yasin’s Breakout Films, in association with The Imaginarium Films. Tanweer Films is distributing the film across the MENA region.

Mohammed Saeed Harib is recognised worldwide as a pioneer of creative talent in the UAE. Best known as the man behind “FREEJ”, Mohammed Saeed Harib is the chairman of Lammtara Art Production and the talented creator of the largest Arabic theatrical production in the Middle East “FREEJ Folklore” along with Emirati cartoon series and gaming app “Mandoos”

Mohammed’s filmography includes directing a chapter in Roger Allers’ animated Hollywood production of “KAHLIL GIBRAN’S THE PROPHET” (2015) where he worked alongside Salma Hayek and Liam Neeson. Mohammed was a creative consultant for Kanye West’s art film “CRUEL SUMMER” (2013), which premiered at the Cannes Film Festival.