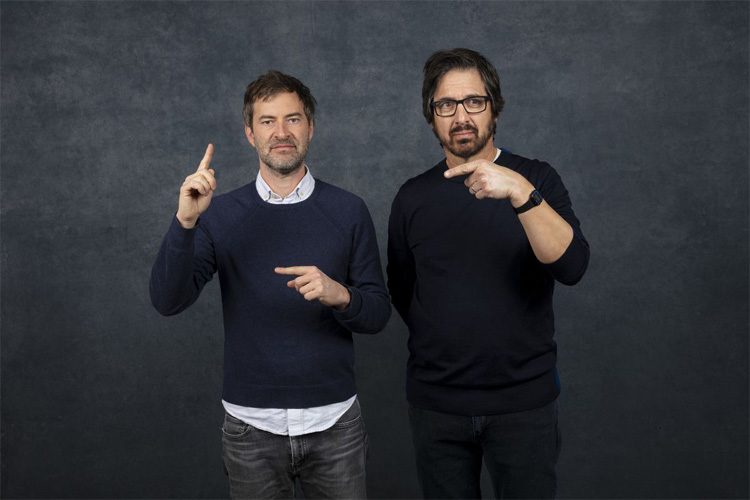 Paddleton is the story of two men who really have only each other. Neighbours in a nondescript apartment complex, they both have unfulfilling, dead-end jobs, seemingly no other friends or relations and spend much of their time together, watching kung-Fu movies, eating pizza and playing a game of their own invention called ‘Paddleton.’ It’s all provisional, perhaps, but it works. Then one of them is given a diagnosis of terminal cancer.

As portrayed by Mark Duplass and Ray Romano, the characters of Michael and Andy are sweet and unassuming, not particularly articulate with their feelings but deeply aware of the attachment that has grown between them.

Duplass, recently an Emmy winner along with his brother and frequent collaborator Jay Duplass for producing the documentary series Wild Wild Country, is also a co-writer of Paddleton along with director Alex Lehmann. The film follows up their previous collaboration on Blue Jay, which was also made in a semi-improvised style starring Duplass and Sarah Paulson.

For Romano, his role continues a series of serio-comic performances — such as in The Big Sick — after the end of his Emmy-winning, long-running sitcom, Everybody Loves Raymond. He also recently saw the release of his first stand-up comedy special in nearly 25 years, Ray Romano: Right Here, Around the Corner.

After the premiere of Paddleton at the Sundance Film Festival, the movie was released by Netflix. Duplass and Romano recently got on the phone to talk about the movie, its unusual production process and unexpected emotional bonds.

And I like heart-breaking stuff. I don’t know why, but it’s very cathartic for me to feel and to cry. I don’t know if that’s normal

Mark, what was it about the process of making Blue Jay that made you want to do another project in this same style again?

Mark Duplass: It was a bunch of things. I think that Blue Jay was sort of magical for me because it was a movie that leaned all the way into its smallness — a very tiny story, small cast, very intimate — and I was just really happy making it. And then, when people connected with the movie, it made me feel kind of excited that people still wanted to watch really small movies about small things. So I wanted to go even deeper into that with this movie, and Alex was such a great partner last time, that we figured, let’s take another run at it.

Ray, what appealed to you? Was it the story, the chance to work with Mark or the unusual process?

Ray Romano: Well, kind of all of those things. I was a fan of the Duplass factory, I was enjoying the show Togetherness at the time it was on HBO, and I am also into the minutia and the smallness. In Everybody Loves Raymond, even though it was a sitcom — and when you think of sitcoms, you think of broad — we did stories that revolved around the little things in a marriage, in a relationship. And things got big, but we liked to explore the little things. So that’s kind of in my wheelhouse and what I’m attracted to. I met Mark for the first time at the Big Sick premiere, and he said he had a project that he thought I’d be good doing, and I thought, “Well, it’s showbiz, I’ll probably never hear from him again.”

But sure enough, about a week or two later, he sent an outline for the movie. And I don’t know if he told me at the time that it was kind of an outlines, improv-ish kind of project. So that intrigued me, the story intrigued me, and then, when I met with the guys, it kind of sealed the deal for me: the way they operate, how collaborative they were. And it was a little scary. I thought it was a little good to scare myself.

In Paddleton, Romano (left) and Duplass play best friends Michael and Andy, with the former being diagnosed with terminal cancer.

Duplass and Sarah Paulson in the Netlix movie Blue Jay (2016), which was made in the same self-improvised style as Paddleton.

Mark, with Blue Jay, you talked about how personal that story was for you, that it was very much you working through these vulnerable feelings that you had about romance and identity. With Paddleton, the story touches on mortality and the right to die, but it’s much more about male friendship and male intimacy. What do you feel you were most exploring with this story?

Duplass: Look, I’m 42 now, and there’s no doubt that death was an interesting thing as a person who’s kind of in that midlife-y place, and that was an interesting entry point. But what was the most meaningful portion of the story, to me, is the study of a very intimate and sweet platonic male relationship. I think I’ve danced around that a bit in our work; I think you see some of that in the way that the two male leads in Togetherness related to each other, and it is reflective of my relationships with my friends and with my brother and how I am with men. But often it takes the form of an emotionally evolved, articulate man and I was really excited to do it with these sort of seemingly outlier characters who aren’t full of all the words.

And I guess in particular, for me, it’s this thing that I’m kind of going through, which is I’ve achieved a level of success in my life that I never even dreamed I was going to get to, not only with the career stuff but like how good my marriage is and how good my relationship with my kids is. And, still, I wake up in the morning and I go on Amazon and try to shop for (stuff) to fill in my life and make me happy. And these two guys were so inspiring to me in that they have nothing, their apartments are so not a wish-fulfilment life and they have puzzles and a made-up game and bad pizza and kung-Fu movies and each other. And that is a very full, beautiful life for them. So part of it, for me, was the wish fulfilment of playing that, someone who at least on paper has infinitely less than I do, and is probably a lot more fulfilled and happy than I am.

Ray, did you find that too? Male friendships can be very challenging, and the fact that these two guys have such a close relationship is really great to see.

Romano: It’s also what makes it so sad and makes you feel for these guys at the end. Andy’s going to lose that one guy, what looks to be a one-in-a-million chance of meeting somebody who he connects with and is a soul mate to. What are the odds that this is going to happen again for this guy? That makes it so heart-breaking. And I like heart-breaking stuff. I don’t know why, but it’s very cathartic for me to feel and to cry. I don’t know if that’s normal. I enjoy things that make me feel that emotion. You just feel for somebody and you kind of connect with them. I feel like, when people can laugh together, they’re bonding. I think when they cry together, they’re bonding. So I’m drawn to things that get deep and make you feel things.