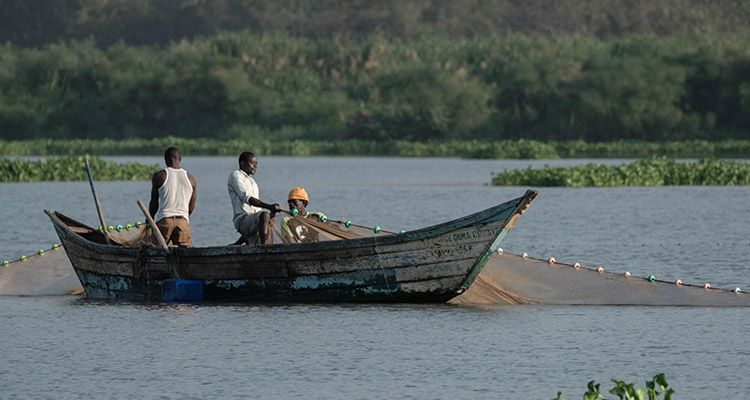 Fishermen pulling a net after the winds cleared water hyacinth from the surface of Lake Victoria in Kisumu, western Kenya.

With nets piled onto wooden boats, a group of fishermen joke while gazing out across Lake Victoria and the vast green weed clogging up the waterway. But their laughter has a worried edge as the sun sets.

The thick green carpet of water hyacinth is again choking Kisumu bay, floating on the surface and blocking Kenya's main entry to the largest body of water in Africa.

Leggy egrets are delighted, high-stepping through the invasive vegetation in search of food — but the fishermen are downcast as it is unclear when the weed will clear.

"If we go fishing now we'll be stuck in the hyacinth," says Maurice Omondi, 40, who heads the Kichinjio Fishermen's Association on one of Kisumu's beaches.

"All we can do is wait for the wind to turn and take the hyacinth with it."

"In the past we tried to make it through but it's very, very hard and the risk is too great: once, we had to get a helicopter to rescue some fishermen stuck in the hyacinth," he says.

Hyacinth is an aquatic floating plant native to South America that has become a global freshwater scourge after being inadvertantly transported worldwide.

It is believed to have first reached Lake Victoria in the 1990s, floating down the lake's western tributary, the Kagera.

Since then it has seriously complicated the movement of fishing boats and other vessels on Lake Victoria, hitting the local economy hard.

"Sometimes we go out fishing and can't come back because the hyacinth blocks access to the beach. At other times, the hyacinth takes our nets," says Thomas Ouma, 40, a tall fisherman in a football shirt.

Lake Victoria is shared with Tanzania and Uganda, but on the Kenyan side alone hyacinth covers around 17,000 hectares (42,000 acres) — roughly five percent of Kenya's lake water surface — a figure that fluctuates with efforts to control the stubborn weed using insects, machines or manual removal.

"The problem is that it is impossible to eradicate the water hyacinth, you can only try to control it," says Christopher Aura from the Kenya Marine and Fisheries Research Institute.

"Seeds can hibernate in the lake bed for between 15 to 21 years," he says, adding that the water hyacinth thrives on chemicals including phosphorus which is found in high quantities in Lake Victoria due to fertiliser run-off from nearby farms.

Hyacinth also reduces the amount of oxygen absorbed in the water, to the delight of species such as catfish, but to the chagrin of others like the more appetising tilapia which is a mainstay of the region's fishing economy.

"I wish hyacinth was our only problem!" says George Otieno, a 34-year-old fisherman in a plaid shirt. "The fishing is not as good as before."

At the market in Kisumu, the gap between local demand and the lake's supply is filled by frozen tilapia fillets — imported from China.

"It's absurd," says Dickson Oduor, 22, as he slices up some locally-caught fish. "But there are poorer people who prefer to buy Chinese tilapia, which is cheaper."

But for Aura the solution is not so simple. Some 500,000 tonnes of fish is required in Kenya, he says, and Kenya fish production cannot meet demand.

"That is why Kenya imports fish from neighbouring countries, but also from China," Aura says.

"If we want to do without Chinese fish we absolutely need to find other solutions, like changing our feeding habits."

On the beach of Kichinjio, 34-year-old boat captain Dismas Odhiambo has returned with his catch, the only one of the fishermen to have made it through the hyacinth and back.

"The wind turned during the night and at around 3:30 in the morning, we could go out," he says.

The catch is better than nothing, but Odhiambo's nets are full of small fry, not the more valuable big fish, and he cannot hide his disappointment.

"To be honest, the fishing has really not been good, I don't think I'll even cover my expenses."