The rupee was bid at 240.60 to the US dollar and offered at 243 in early open market trade on Wednesday.

The Pakistani rupee weakened by 1.2% on Wednesday after foreign exchange companies removed a cap on the currency, saying it caused “artificial” distortions for an economy in desperate need of International Monetary Fund (IMF) help.

The move towards a market-based exchange rate should please the IMF, as that is one of the conditions that the multilateral lender has set before it agrees to unlock a stalled bail-out programme for Pakistan.

The IMF is yet to approve its ninth review to release $1.1 billion, which was originally due to be disbursed in November last year. The Fund wants Pakistan to cut subsidies, slash energy sector debt and levy more taxes to reduce the budget deficit, and make the transition to a market-based exchange rate.

Prime Minister Shahbaz Sharif has indicated that the government was finally ready to swallow the bitter pill of the IMF “stringent” conditions to revive the loan programme.

The ruling Pakistan Democratic Movement (PDM) alliance was ready to sacrifice its political career for the sake of the country, Dawn news quoted Shahbaz as saying.

The premier said the government has clearly conveyed its intentions to complete the ninth review to the IMF.

“We are ready and want to sit down regarding your (IMF’s) conditions so that (the review) can be concluded and Pakistan moves forward,” he said.

“I spoke to the IMF managing director two weeks ago and we have proactively approached them... so that the programme moves forward, in addition to other multilateral and bilateral programmes.”

Finance Minister Ishaq Dar’s attempts to defend the rupee, including currency market intervention, had run counter to the IMF’s advice.

Battling the highest inflation in decades, the central bank has raised interest rates sharply, but the country has barely enough foreign exchange reserves to cover three weeks of imports and is struggling to meet its external financing obligations.

The Exchange Companies Association of Pakistan (ECAP) said late on Tuesday it was lifting the cap on the currency in the interest of the country.

“We have decided that we bring the exchange rate at par (with) what we are supplying to the banks against credit cards,”

ECAP Secretary General Zafar Paracha said in a statement, adding that level is 255/256 rupees to the dollar.

Before the cap on the rupee was removed, markets eyed three different rates to assess its value -- the state bank’s official rate, the one assessed by the foreign exchange companies and the black market rate.

“Though the bank rate for today is not been disclosed yet, we think the dollar rate in banks may fall by up to 5% in few days,” said Mohammed Sohail, chief executive officer at brokerage Topline Securities.

ECAP President Malik Bostan told Reuters that the central bank had given an assurance at a meeting that commercial banks would be instructed to supply exchange companies with dollars within a week.

“We’re facing a shortage. We do not have physical dollars,” Bostan said. “People aren’t selling dollars. They’re only buying.”

He said the removal of the cap would curb black market trade, though it would take time to bridge the gap.

“The black market rate is still sticky in the range of 260-270. The decision of exchange companies has not had any impact as such,” said Fahad Rauf, head of research at Ismail Iqbal Securities.

Stock market investors responded positively to the decision to remove the currency cap, with the Pakistan Stock Exchange’s (PSX) benchmark index rising 1.77%. Topline’s Sohail said investors hoped the removal of the cap would help to persuade the IMF to resume disbursements. 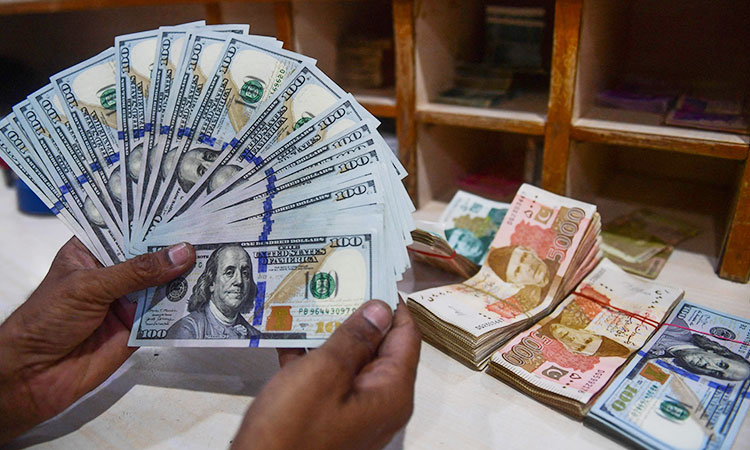 According to the central bank, the rupee slid to 200 against the US dollar, showing a steady decline in the value of this Islamic nation’s currency

On Wednesday, the rupee was trading at Rs225 per US dollar, having ended on Tuesday at Rs221.99 after Fitch ratings agency revised its outlook for Pakistan sovereign debt from stable to negative. 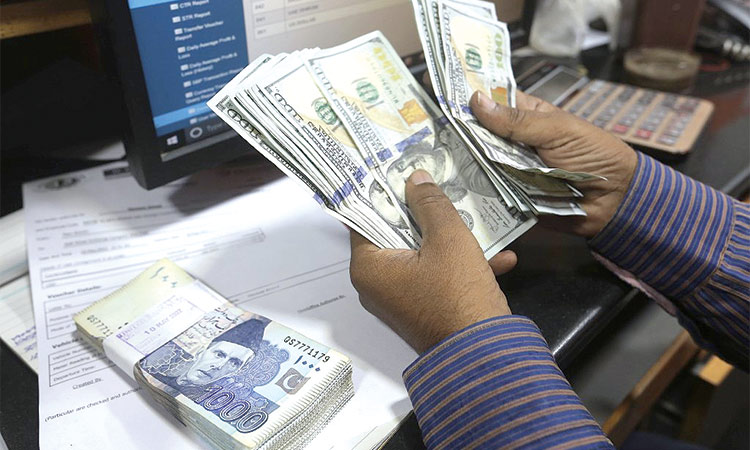