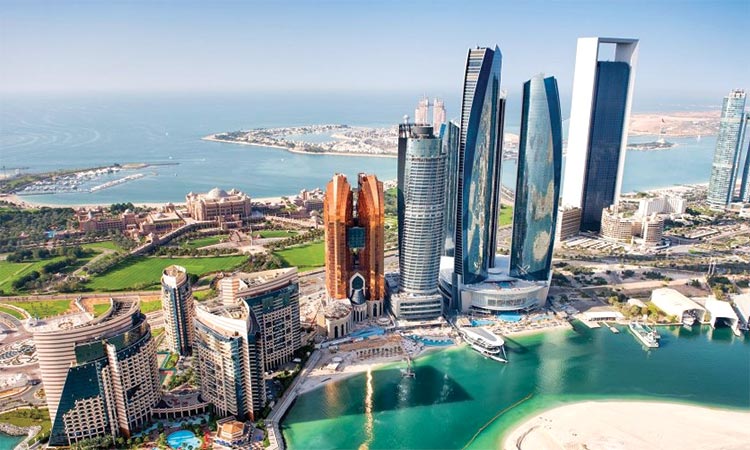 The financial and insurance activities contributed 5.5% to the GDP, with a growth rate of 9.1% during the first half of 2022 compared to the same period last year.

Statistics Centre - Abu Dhabi (SCAD) has announced statistical data that show expansion of Abu Dhabi’s Gross Domestic Product (GDP) in the first half of 2022, reaching 11.2 per cent compared to the same period last year. The growth reflects the Emirate’s robust performance and the ability of the economy to maintain competitiveness and sustain growth despite global economic challenges.

According to estimates announced by SCAD and published by the Abu Dhabi Government Media Office (ADGMO), the quarterly GDP growth rate reached its highest value in six years during the second quarter of 2022 which hit 11.7 per cent compared to the same quarter last year.

At the end of the first half of 2022, the real GDP value (at constant prices) exceeded AED 543 billion, and the value of the non-oil sectors’ GDP increased Dhs28.4 billion compared to the same period last year to reach Dhs273 billion in total.

Mohamed Ali Al Shorafa, Chairman of the Abu Dhabi Department of Economic Development (ADDED), said: “Economy’s positive growth rates in Abu Dhabi reflect the profound strength and success of the economic diversification policy, which contributed to the economy’s resilience and ability to address global changes posed by geopolitical and economic factors that directly affected strategic sectors such as energy and international trade.”

His Excellency added: “The Abu Dhabi economy continues to reap the benefits of the effective policies guided by the wise leadership to strengthen the pillars and foundations of the economy, maintaining a competitive performance while attracting investments with more initiatives to achieve the strategic objectives of Abu Dhabi.” Rashed Abdul Karim Al Balooshi, Undersecretary of ADDED, said: “The vital performance of the Emirate’s economy over the last few years resulted in remarkable growth rates in the non-oil sectors during the first half of 2022, reflecting a competitive outlook of Abu Dhabi’s business ecosystem. Abu Dhabi implemented economic programs in recent years to facilitate the establishment and operation of new businesses across the Emirate giving the necessary factors that can stimulate growth in various sectors.”

Ahmed Mahmoud Fikri, Director General of the Statistics Centre - Abu Dhabi, said: “Statistical estimates reflect the ability of Abu Dhabi’s economy to sustain rapid growth and respond quickly to plans and efforts to diversify the economic base and stimulus packages. The strategic plans and stimulus packages have produced huge growth, as most economic activities continue to expand with full alignment of economic sectors at the emirate level.”

Oil and non-oil sectors: According to data released by SCAD, the mining and quarrying activities (including crude oil and natural gas) contributed 49.7% to the real GDP of the Emirate of Abu Dhabi during the first half of 2022, which means non-oil activities contributed 50.3% at constant prices defying the noticeable increases of global oil prices during the same period. The increase in the non-oil sector’s contribution to the real GDP proves the success of the ambitious strategic plans for diversifying the economic base in Abu Dhabi.

SCAD produces regular estimates of the GDP based on several statistical indicators and administrative records according to international standards and scientific methodologies to measure the effectiveness of economic programs and strategic plans to assist decision-makers in meeting the requirements for sustainability and economic growth.

The World Bank has recently hailed the UAE’s “favourable business environment and world-class infrastructure”, expecting the country’s real GDP to grow by 5.9 per cent in 2022. This came as the World Bank announced its new Gulf Economic Update (GEU) where it said higher oil receipts supplemented with a gradual non-oil recovery in the Emirates will bolster fiscal revenue resulting in a fiscal surplus to hover around 4.4 per cent of GDP in 2022.

Recent bilateral free trade agreements with Asian partners supported by strong oil exports will place the UAE’s current account surplus at 11.2 per cent of GDP in 2022, according to the report. However, the bank expected the real GDP to moderate to 4.1 per cent in 2023 as slower global demand may dampen growth due to tightening financial conditions.