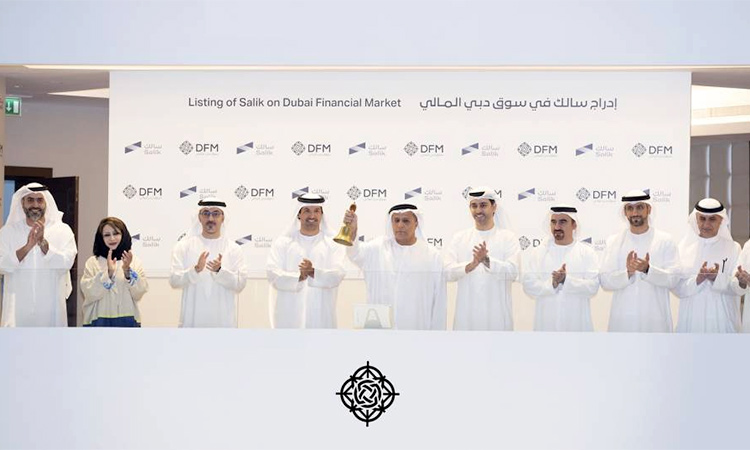 Mattar Al Tayer rings the market opening bell along with other officials at the Dubai Financial Market on Thursday.

Gulf Today, Staff Reporter
Dubai Financial Market (DFM) on Thursday welcomed the listing of shares of Salik Company, the leading company in the field of traffic tariff systems at the regional level and the exclusive toll gates operator in Dubai. This is the third public offering and listing on the DFM in 2022 to date, as part of the accelerated steps to implement Dubai’s strategy to develop financial markets, which includes offering shares in ten leading entities.

Mattar Al Tayer, Chairman of Salik, rang the DFM market opening bell to celebrate the listing, in the presence of Helal Al Marri, Chairman of the DFM, Ibrahim Sultan Al Haddad, Chief Executive Officer of Salik and Hamed Ali, CEO of the DFM and Nasdaq Dubai, as well as senior executives from both sides.

The Company’s shares began trading under the symbol “SALIK”, culminating its successful public offering. The strong demand toward the issuance prompted the Company to raise the offered shares to 1,867,500,000 shares representing 24.9 percent of its share capital at a price of Dhs2 instead of 20 per cent as initially planned. The offering was oversubscribed by 49 times as it has attracted orders with a total value of Dhs184.2 billion, in a clear indication on the strong demand for Salik’s shares from various investor categories.

On this occasion, Mattar Al Tayer said, “On behalf of the Board of Directors, I extend my gratitude to His Highness Sheikh Mohammed Bin Rashid Al Maktoum, Vice President, Prime Minister and Ruler of Dubai;  Sheikh Hamdan Bin Mohammed Bin Rashid Al Maktoum, Crown Prince of Dubai and Chairman of Dubai Executive Council; and  Sheikh Maktoum Bin Mohammed bin Rashid Al Maktoum, Deputy Ruler of Dubai, Deputy Prime Minister, and Minister of Finance, for their continuous support. Salik’s successful listing on the DFM is a clear demonstration of investor confidence in Dubai’s capital markets and its growth ambitions.”

Sheikh Maktoum Bin Mohammed in Rashid Al Maktoum, Deputy Ruler of Dubai, Deputy Prime Minister, and Minister of Finance has a clear vision to double the size of the financial market and attract foreign investments, and Salik is further proof of the success of this vision. I would like to welcome our new shareholders who are embarking on this journey with us, which Salik started fifteen years ago, and today it has become one of the most important and leading brands that have played a pivotal role in managing traffic in Dubai,” he added.

For his part, Helal Al Marri said, “The listing of the shares of this unique company supports Dubai’s ambitious strategy to develop its financial markets, strengthening its leadership and boosting its prospects. Dubai has always been a regional leader in terms of offering stakes in government groups since 2006 beginning with the listing of the DFM Company itself. Today’s listing is the third of its kind since April 2022, which underscores the commitment of the Supreme Committee for the Development of Financial Markets, led by Sheikh Maktoum Bin Mohammed Bin Rashid Al Maktoum, to implement the strategy and achieve its objectives with the highest levels of efficiency and at the earliest possible timeframe as Dubai used to deliver.”

Ibrahim Sultan Al Haddad said, “We are delighted to have successfully completed the IPO and to begin our journey with our new shareholders as a DFM-listed company. The overwhelming demand that we witnessed for the IPO is testament to Salik’s robust business model, as well as the fundamentals underpinning Dubai’s capital markets. We have full faith in Salik’s long-term principles and values, and we are fully committed to delivering great value over the long term to all our shareholders.”

Hamed Ali said, “We are pleased to list Salik shares which gives strong impetus to the Transportation Sector in the market and reinforces our constant efforts to diversify investment opportunities and attract companies that reflect the dynamism and growth of Dubai’s economy. Moreover, this listing is a key step in Dubai’s continuous and successful efforts to expand ownership base in numerous leading companies. It also offers DFM investors a proxy to participate in the notable growth of these companies, supported by the world-class business environment and the rapid economic growth in Dubai.”

Salik shares are traded within the Transportation Sector. The DFM applied no price limits on the shares during the first day of trading, as they will be applied from the second day of listing.

The IPO saw Salik offer 1.9 billion ordinary shares, representing 24.9% of its share capital, at a price of Dhs 2.00 per share, implying total gross proceeds of over Dhs3.7 billion and a market capitalization of Dhs 15.0 billion. EFG Hermes acted as joint bookrunner on the transaction as part of the banking syndicate advising the issuer and the selling shareholder. Salik will commence trading today under the ticker SALIK. Following the transaction, Salik will remain a state-owned company, with the Government of Dubai owning 75.1% of the company’s share capital. 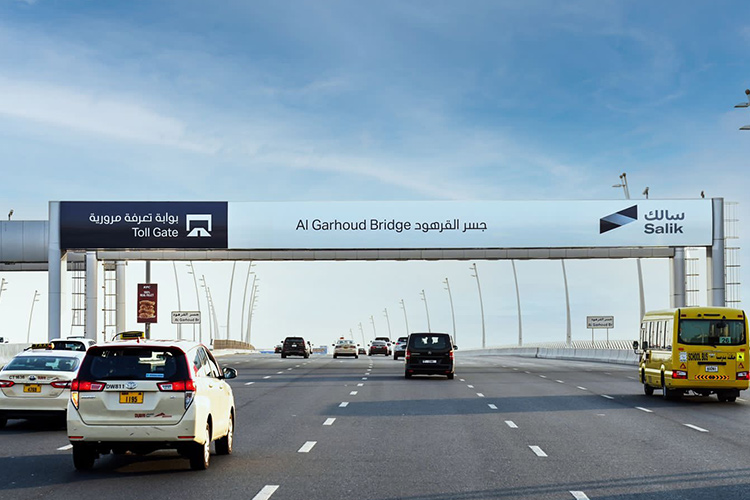 Dubai’s Salik ups IPO size to 24.9% due to strong demand