UAE and Poland to strengthen cooperation in various fields - GulfToday

UAE and Poland to strengthen cooperation in various fields 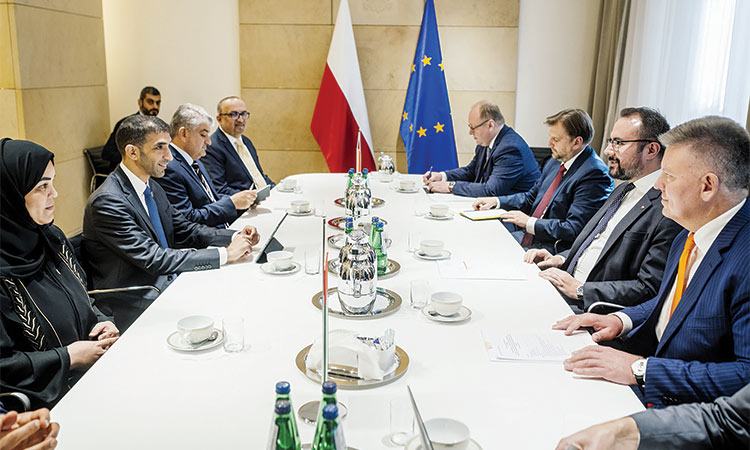 The UAE delegation in a meeting with Polish officials in Warsaw. WAM

Dr Thani Al Zeyoudi, Minister of State for Foreign Trade, affirmed that the bilateral relations between the UAE and the Republic of Poland are well-established and strong.

The ties between the two countries are witnessing continuous development in various fields, especially economic and trade, which has contributed to opening new skylines for joint economic and investment cooperation, he added.

This came during the meetings with a number of ministers and senior officials in the Polish government, on the sidelines of the 3rd edition of the joint economic committee between the two countries in the Polish capital Warsaw, in presence of a number of government officials, businessmen and representatives of the private sector from both countries.

Al-Zeyoudi also held a bilateral meeting with Irenes Zyska, Minister of State and Government Commissioner for Renewable Energy Resources in Poland, to study the possibility of establishing joint projects in the fields of energy and renewable energy. They further discussed the ways to develop and exchange best experiences and practices to improve the efficiency and effectiveness of the performance of the energy sector in both countries, notably the modern technology used in the field of renewable energy.

In another meeting, Thani Al Zeyoudi discussed with Ryszard Bartosek, Minister of State at the Polish Ministry of Agriculture and Rural Development, the ways to enhance the cooperation in trade exchange between the two countries in food, agricultural and animal products. The meeting also discussed the ways that ensure the flow of goods and products in the markets of the two countries, in line with their strategic vision regarding implementation of food security plans and provision of large quantities of basic food commodities.

Furthermore, Al Zeyoudi held a bilateral meeting with Pavel Jabunski, Undersecretary of the Polish Ministry of Foreign Affairs for Economic and Development Cooperation, where they discussed new mechanisms and plans that contribute to increasing foreign direct investment between the two countries in sectors of common interest. They also discussed the ways to support bilateral cooperation in the economic and trade fields in order to provide more investment opportunities for the Emirati and Polish business communities, in a way that serves the common interests, vision and aspirations of the two countries.

Thani Al Zeyoudi also visited the Polish company “Asseco Group” specialized in software and technology development. He invited the company to join the Next Generation Foreign Direct Investment “NEXTGEN FDI” initiative, and also to benefit from the advantages and possibilities offered by the economic environment of the UAE.

DMCC – the world’s flagship Free Zone and Government of Dubai Authority on commodities trade and enterprise – has successfully concluded recently its first Made for Trade Live roadshow in Warsaw, Poland, where it highlighted the benefits of doing business in Dubai for Polish companies looking to expand internationally.

The event saw senior DMCC executives address over 139 representatives of Polish businesses from a range of sectors. Speakers and delegates discussed the strategic geographic location and commercial appeal of Dubai and the ease of doing business in DMCC, which is the fastest growing and most interconnected free zone in the world. The discussions also focused on opportunities for the UAE and Poland to enhance bilateral trade and business relations.