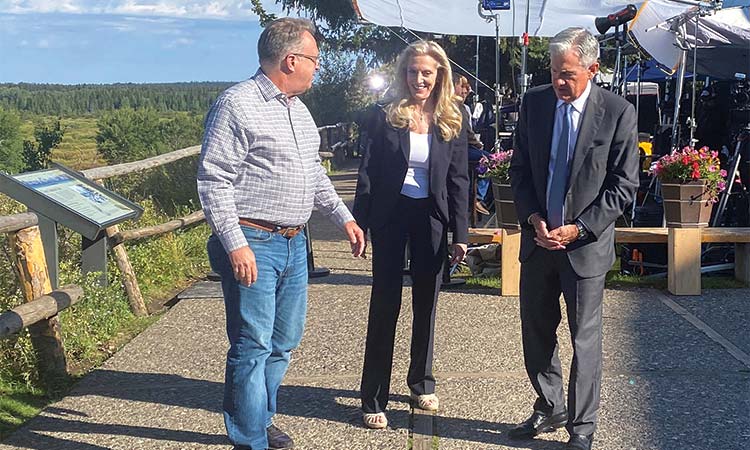 Jerome Powell interacts with other top officials during a break at the annual Kansas City Fed Economic Policy Symposium in Jackson Hole, Wyoming, US, on Friday. Reuters

Global stock markets slumped on Friday, hurt by weakness on Wall Street after Federal Reserve Chair Jerome Powell said the US economy will need tight monetary policy “for some time” before inflation is under control.

Tight monetary policy “for some time” means slower growth, a weaker job market and “some pain” for households and businesses, Powell said in a speech to the Jackson Hole central banking conference in Wyoming.

“Reducing inflation is likely to require a sustained period of below-trend growth. Moreover, there will very likely be some softening of labour market conditions,” Powell said.

He did not hint at what the Fed might do at its upcoming Sept. 20-21 policy meeting. Officials are expected to approve either a 50 basis points or 75 basis points rate increase.

Interest rate futures tied to expectations about Fed policy fell on Friday in the moments after Powell’s speech, reflecting an increase in the probability that the Fed would deliver a third straight 75-basis-point rate hike at its next meeting.

“It was hawkish as expected. Powell’s message is clear, the Fed is far from done in its fight against inflation,” said Antoine Bouvet, senior rates strategist at ING in London. MSCI’s gauge of stocks across the globe shed 1.16%.

On Wall Street, main indexes fell after Powell’s comments, with rate-sensitive banks and high-growth stocks that tend to outperform in a low-interest-rate environment, coming under pressure.

US two-year Treasury yields briefly popped to their highest levels since Oct. 2007 before stabilizing near two-month highs Friday after Powell’s comments on the Fed’s plans for interest rate hikes.

The two-year U.S. Treasury yield, which typically moves in step with interest rate expectations, was up 4.9 basis points at 3.423%, slightly below its high for the year of 3.4350% in June.

In currency markets, the dollar pared its losses against a basket of currencies following Powell’s remarks.

The dollar index which measures the greenback against six peers was 0.27% lower at 108.19.

The euro was 0.59% higher, following a Reuters report that some European Central Bank policymakers want to discuss a 75 basis points interest rate hike at the September policy meeting, even if recession risks loom, as the inflation outlook is deteriorating.

Oil prices fell in a choppy session on Friday as talk of a hefty ECB rate hike stoked demand worries.

Brent crude futures fell $0.61, or 0.61%, to $98.73 a barrel. Gold fell 1% on Friday after Federal Reserve Chair Jerome Powell in his speech at Jackson Hole said the US economy will need tight monetary policy “for some time” before inflation is under control. Powell said this could mean slower growth, a weaker job market and “some pain” for households and businesses, but did not hint at what the Fed might do at its upcoming September policy meeting.

Spot gold fell 1% to $1,740.79 per ounce by 11:05 a.m. ET (1505 GMT), en route to a second straight weekly decline, down about 0.4% so far. US gold futures dropped 1.1% to $1,752.60. “Powell’s statements were quite hawkish and since there was no dovish pivot, gold will continue to face pressure as it will have to deal with higher interest rates,” said Philip Streible, chief market strategist at Blue Line Futures in Chicago. Gold is considered a hedge against inflation and economic uncertainties.

But rising interest rates make the non-yielding asset less appealing. “Gold needs to capture $1,800 in order to gain its momentum, otherwise $1,740s is key level support,” Streible added. US two-year Treasury yields briefly popped to their highest since October 2007 before stabilizing near two-month highs. Bullion’s dip came despite a weaker dollar. Earlier in the day, investors took stock of data showing US consumer spending barely rose in July, but inflation eased considerably. In physical markets, gold premiums in China jumped this week to their highest since last October, while demand cooled in India. Spot silver fell 1.3% to $19.03 per ounce. “Silver prices are particularly vulnerable given the observed deterioration in commodity demand, given the metal holds little exposure to the rise in supply risk premia that has been supporting industrial metals,” TD Securities said in a note. Platinum fell 1.2% to $870.44, and palladium fell 0.3% to $2,140.48.

Global stocks rose and the dollar retreated on Tuesday as a fall in US inflation and an improving outlook for China’s economy continued to cheer investors. 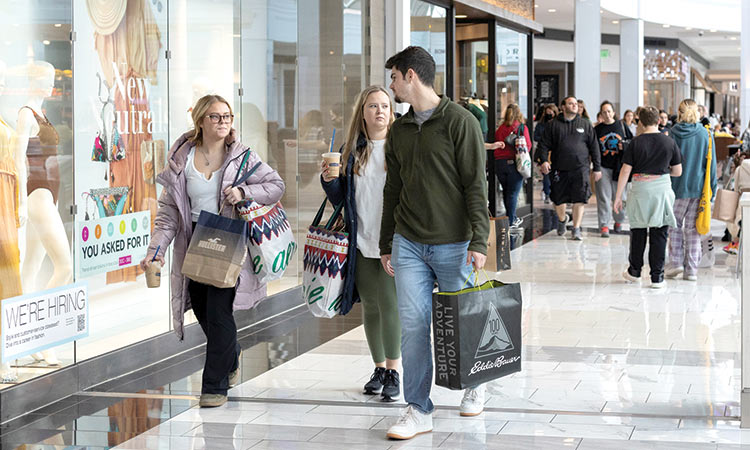 Global stock markets up, dollar declines as US inflation shrinks

Stocks surged while the dollar dropped on Tuesday as US inflation slowed more than expected, opening the way for the Federal Reserve to reduce the tempo of interest rate hikes.