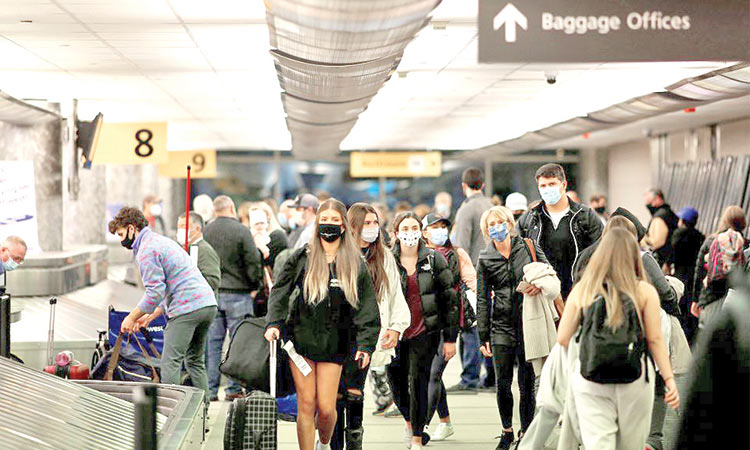 Travellers reclaim their luggage at the airport in Denver, Colorado. File/Reuters

The US planemaker delivered its first Dreamliner since May 2021 on last Wednesday, in a significant milestone for the manufacturer after production problems with its wide-body jet.

Boeing must now wade through painstaking regulatory checks to get further 787s delivered while chipping away at a backlog of about 120 stored planes outside its plants.

But analysts say there is increasingly talk of demand for such jets after years of a market glut.

From East Asia to the Gulf, several airlines are renewing wide-body fleets.

Saudi Arabia is discussing a potentially significant order for wide-body jets, three industry sources said, though talks have fluctuated over several years without a deal being announced and the timing of a decision may be some way off.

But with Riyadh investing in tourism and aviation as part of its Vision 2030 blueprint to diversify the economy, one person following the matter predicted a decision “sooner rather than later,” with Boeing 787 and 777X seen potentially among the mix.

Taiwan’s government-backed China Airlines is weighing options to renew a fleet of 22 Airbus A330 jets in a competition between the 787 and Airbus A330neo.

Malaysia Airlines is poised to announce on Monday a deal to acquire 20 A330neo wide-body jets, roughly half of which would be bought directly from Airbus.

“I firmly believe that as borders fully reopen, we will see the same rebound in international travel that we saw in the domestic markets,” Aengus Kelly, chief executive of AerCap , the world’s largest leasing firm, said on Thursday.

“Given the level of inquiry and demand we are seeing for wide-body aircraft, it is clear that the airlines are also convinced of this.”

International traffic has accelerated since the start of the year, though the International Air Transport Association says it has a long way to run before regaining pre-pandemic levels.

“The transatlantic is live and doing well,” Mounir told reporters. “You’re seeing very robust demand between Europe and the US and ... between the Middle East and Europe and US. So folks are sticking their heads above water again and ... making plans.”

Part of the surge of interest stems from delays caused by manufacturers themselves as well as increased regulatory scrutiny following the recent Boeing 737 MAX safety crisis.

Boeing’s large twin-engined 777X has been pushed back to 2025, five years later than originally planned, and the 787 has had a one-year pause in deliveries.

“There is a real rebound in demand for wide-bodies, but availability is short because of manufacturing and development delays. Therefore it is not yet back to pre-COVID levels,” said independent aviation adviser Bertrand Grabowski.

“The 777X is late and the programme has its own problems and the 787 availability has been patchy,” he added.

“The jury is out on whether Airbus will manage to reach their delivery target for the A350,” Grabowski added.

Many had seen the door as being left ajar to a significant Boeing wide-body order after the last big Chinese order in July, which focused purely on smaller narrow-body models, went to Airbus.

In September, US Commerce Secretary Gina Raimondo said the Chinese government was preventing its domestic airlines from buying “tens of billions of dollars” of Boeing airplanes. China tends to balance jet purchases over time but has effectively been off the market for five years, with demand hampered first by trade tensions and then by the pandemic, analysts said.

Now, potential trade with emblematic US companies has been thrust into the furore surrounding U.S. House of Representatives Speaker Nancy Pelosi’s visit to Taiwan as well as Chinese military exercises around the China-claimed self-ruled island.

Airbus on Monday confirmed slower deliveries in July as a supply crunch left semi-finished jets outside its factories without engines, but bolstered its future business with confirmation