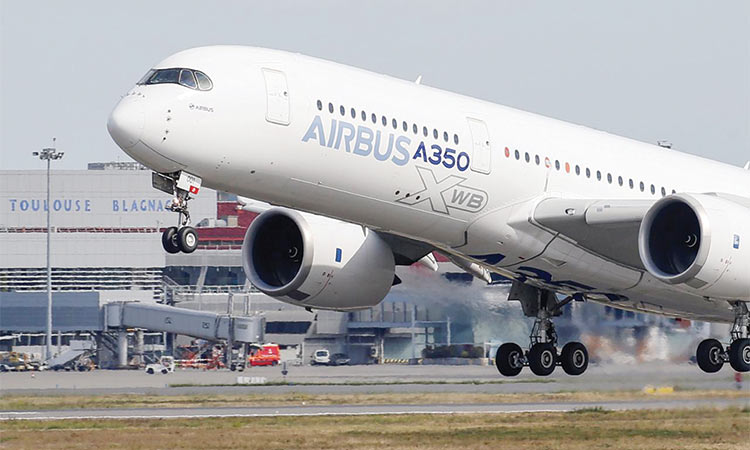 An Airbus A350 takes off at the aircraft builder’s headquarters in Colomiers near Toulouse, France. File Photo

The orders come after a bumper year for Airbus, which posted record profits in 2021 after a two-year pandemic slump, giving the company a further boost over US rival Boeing.

China Eastern said Friday it had agreed to purchase 100 A320neo jets and China Southern said on the same day that it would buy 96 of the same model.

Air China and its subsidiary Shenzhen Airlines also confirmed the purchase of a combined 96 A320neo planes, according to separate filings.

Airbus said in a statement Friday that the deals showed “the positive recovery momentum and prosperous outlook for the Chinese aviation market”.

It said the deals “brought to conclusion these long and extensive discussions that have taken place throughout the difficult Covid pandemic”.

Boeing’s business in China -- one of the world’s largest aviation markets -- was hit in recent years by uncertainty over its 737 MAX planes, which were suspended from use in the country after deadly crashes in 2019.

Chinese authorities finally gave the go-ahead for the 737 MAX to resume service last year after making a series of safety adjustments.

In March this year, a Boeing 737-800 crashed in the southern province of Guangxi, killing 132 people in China’s worst air disaster in decades.

The China Eastern flight was travelling from the cities of Kunming to Guangzhou when it inexplicably plummeted from an altitude of 29,000 feet into a mountainside.

Last month, the Wall Street Journal reported that US investigators believe someone on board crashed the aircraft deliberately, citing a person familiar with a preliminary assessment of the incident.

China’s travel industry has been hammered by the country’s stringent zero-Covid policy, which has imposed sweeping lockdowns often over just a handful of cases and weighed on the economy and consumer confidence.

The country’s international borders were shut in March 2020 and the number of international flights is still tightly restricted in an effort to tamp down “imported” virus cases.

But there were hopes of some relaxation in the policy this week after Beijing said it would cut the length of mandatory quarantine for inbound travellers -- the biggest easing of entry restrictions yet after sticking to a rigid zero-Covid policy throughout the pandemic.

Air China on Friday said its latest purchase would “optimise fleet structure and supplement capacity in the long term”.

China also has high hopes for developing its own aircraft manufacturing industry, with attention focused on Comac’s C919 narrow-body plane, a potential rival to Airbus and Boeing aircraft.

Separately, American airlines is offering pilots raises of nearly 17% by the end of 2024, a sign of the leverage that pilots enjoy as airlines struggle with a labor shortage.

CEO Robert Isom said Thursday that the proposal would boost pilot wages at American to the levels detailed in a tentative agreement between United airlines and its pilots.

Taiwan’s China Airlines Ltd said on Tuesday it would buy 16 Boeing Co 787 widebody planes to replace its ageing fleet of Airbus A330s following a widely-watched contest held against the backdrop of regional tensions.