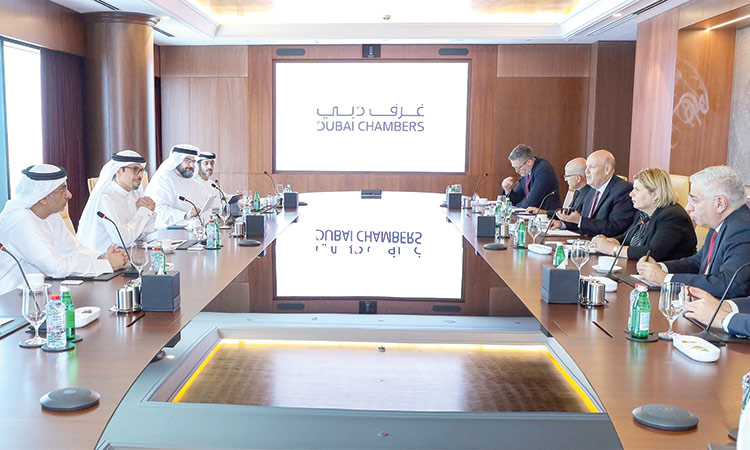 Dubai International Chamber, one of three Chambers operating under Dubai Chambers, has announced plans to open a representative office in Tel Aviv, which will aim to facilitate trade and investment between business communities in Dubai and Israel.

The announcement came during a meeting held recently at the Chamber’s headquarters, attended by Hamad Buamim, President & CEO of Dubai Chambers, Orna Barbivay, Israeli Minister of Economy and Industry and Amir Hayek, Israel’s Ambassador to the UAE; and representatives from the embassy, ministry and Dubai Chambers.

Orna Barbivay, Israeli Minister of Economy and Industry said: “Last week, on behalf of the Government of Israel, I signed the CEPA (Comprehensive Economic Partnership Agreement) between Israel and the UAE.

In a meeting I conducted later on with Hamad Buamim, President and CEO of Dubai Chambers, Hamad Buamim announced our mutual goals to bring about rapid promotion of economic cooperation,” and said the UAE-Israel partnership agreement and Dubai International Chamber’s announcement reflects the strong commitment which both countries attach to strengthening economic ties and creating new opportunities for business.

For his part, the Ambassador of Israel to the Emirates, Amir Hayek describing the singing of the trade agreement as a historic step that opens business opportunities for both of our countries and noted that Dubai International Chamber’s decision to establish a representative office in Israel is a significant step toward promoting cooperation between the two countries and their business communities.

Israeli ambassador to the UAE said that the Dubai International Chamber’s decision to establish a representative office in Israel is a significant step toward promoting cooperation between the two countries and their business communities.

“By expanding our presence into Israel, we will be well positioned to achieve the objectives of the Comprehensive Economic Partnership Agreement signed by the UAE and Israel, build new bridges between the two business communities and boost non-oil trade to reach $10 billion annually within the next five years,” said Buamim.

Buamim stressed the important role of promoting Dubai as a global gateway for Israeli companies and attracting foreign investment in key sectors of mutual interest such as digital economy, information technology, artificial intelligence, smart services, agricultural and food technologies, and space sciences. Buamim also said that the Israel is a market of strategic importance to Dubai and we expect it to become of the emirate’s top 10 trading partners in the next few years.

The President & CEO of Dubai Chambers noted that trade will remain economic cooperation between Dubai and Israel, and described Israel as a market of strategi importance to Dubai, adding that it is expected to become one of Dubai’s 10 top trading partners within a few years, especially since the Dubai International Chamber, as part of its strategy, has identified the Israeli market among the 30 priority markets.

He noted that the office will work towards the target of achieving the targets outlined under the Dubai Foreign Trade Plan announced by His Highness Sheikh Mohammed bin Rashid Al Maktoum, Vice President and Prime Minister of the UAE and Ruler of Dubai, which aims to boost Dubai’s non-oil trade to Dhs2 trillion within five years.

The new representative office in Tel Avis will identify business and investment opportunities that offer the most potential for Dubai-based companies, while it will also support Israeli companies with their entry into the Dubai market and help them leverage the emirate to expand their reach into markets across the GCC, Africa and Asia.

The announcement of the Israel office comes after the Dubai International Chamber’s Board of Directors recently approved its new strategy for the next three years, which aims to elevate Dubai’s position as global business hub and preferred market for multinational companies.

Dubai International Chamber one of three chambers operating under the umbrella of Dubai Chambers, was established to promote Dubai as a global business hub, attract multinational companies and expand the emirate’s trade ties with promising markets.

“This CEPA comes at a critical time for the global economy. The world is beginning to emerge from the global pandemic, but challenges remain, not least as conflict and inflation threaten to stall the global recovery,” said Dr Thani Bin Ahmed Al Zeyoudi, Minister of State for Foreign Trade.

“The UAE-Israel CEPA will help facilitate global supply chain efficiency, including for agriculture and food products, which would have an impact on food security. It would also help facilitate the movement of natural persons, especially the business community,” the minister explained.

Dubai is seeing growing interest from Zimbabwean agribusiness companies that are keen to leverage the emirate as a strategic hub to boost trade, industry experts said during a webinar, held recently.

The Dubai Chamber of Commerce and Industry has released a new report highlighting its key CSR achievements in 2020, as well as the outcome and impact of campaigns, initiatives,